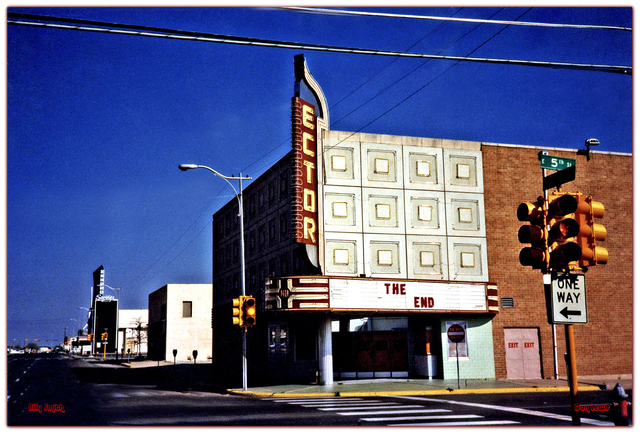 Located at the corner of N. Texas Avenue and E. 5th Street. The Ector Theatre opened as a single screen on August 1, 1951 with Loretta Young in “Half Angel”. This is a beautiful Art Moderne style house done in a dark orange brick with a corner entrance. From about 20 feet down the side and wrapping around the front is done in a green granite with geometric designs in square blocks that run around from the side to the cover the entire front of the theatre.

The marquee wraps around from the side to the front of the building. The vertical is still in use and is located on the corner of the building starting just above the marquee. Each geometric block along the side and the front has the pattern lined with neon.

The box office is located on the right side of the entrance doors and has a verigated pattern of aluminum around the base.

The theatre closed in 1985 but the city of Odessa now owns the Ector Theatre and went through a renovation of both the interior and exterior and has been operating it since August of 2001. It was closed May 14, 2016 with “The Last Picture Show”. The city of Odessa planned to renovate the building, saying it will take several years to complete. It was completed in August 2020 and has reopened as a live music venue.

An image of a rare piece of Odessa theater history. These booklets were handed out to commemorate the Ector Theatre’s grand opening in 1951.

Chuck—Hodge—Not Hall operated the Ector 1951-1985, it was opened
August 1, 1951 with Half Angel starring Joseph Cotton & Loretta Young
H. J. Hodge still resides at Odessa, and came to the city with the
opening of the new Ector in 1951
Billy Holcomnb

A 1987 photo of the Ector Theatre in Odessa.

The Ector closed in June 2016. The story was in first posted in CT’s own Breaking News section. Here is an updated version.

full-page grand opening ad from July 31st, 1951 uploaded in the photo section and below: