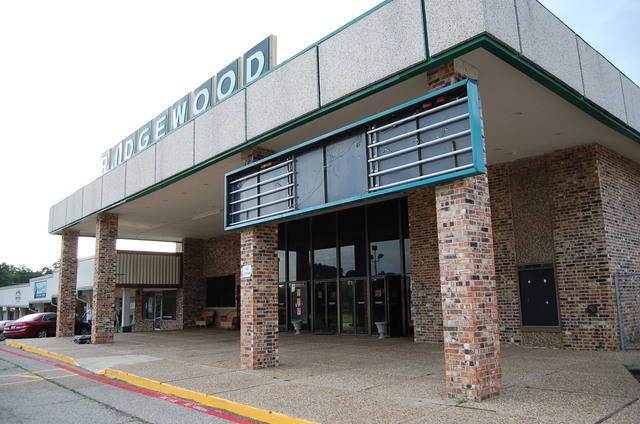 This theater was the local hangout for kids back in the 1980’s. Offering $1 seats and cheap concessions. Not to mention at least 15 now classic arcade games. The double features were the best deal. The theater still remains to this day.

Apparently it has an owner who really doesn’t care about it. And flat refuses to sell to anyone for the purpose of re-opening. If anyone out there knows any information on the property located in Garland, at the corner of 1st Street and W. Kingsley Road. Please post your comments. Would still be a great place with proper ownership and management.

I’ll be traveling to Garland soon. I will do my best to find out some information about this theatre.

I went their back when I was in High School (1975-78).. Was a pretty nice theatre at one time. It has been closed for quite a while.

My grandparents live about 5 mintues away, so I drove by on Easter Sunday. At least for that day, the theater was being used as a banquet hall. There were tables set up in the well-perserved lobby. Even though the doors were wide open, I was running late, so I didn’t stop to go in.

I believe the theater was part of the Interstate circuit when it opened. I want to say it was originally a one-screen, before being twinned sometime in the late 70s.

The theater’s marquee on Kingsley is still there. Various stores in the shopping center the theater is located in now use it to advertise sales.

I was the manager of the Ridgewood Theatre in 1979 through the summer of 1980. At the time it was a dollar theatre owned by Plitt. It was well kept. People were always commenting about how nice it was “for a dollar theatre.” In the summer of 1980 the Dallas area experienced a record number of consecutive 100+ temperature days, and during that period the electricity went out one day and all the candy melted!!!

This Theatre was in the process of being converted into a club a little while back.. Went by about a month ago (Around May 2009) to see that the club did not make it. Or at least it doesn’t look like it made it. It was closed up. I have some photos of when it was being converted into a club back in 2007. I was allowed to go inside for a few photos! Seen Here:.. http://tinyurl.com/kj2g2m
… Enjoy.. RAC

Update – Went by the Ridgewood Theatre 2 weeks ago. (January 2011).. It sits idle. No action of any kind looks to be going on. Sad. Waste of a Theatre. The Auditorium was so big!!

M.C. Cole opened the $3,000,000 Ridgewood Shopping Center in 1959 with 141,000 square feet of business space occupied by stores including Wyatt’s Grocery Store, Woolworth’s, and M.L. Green. Cole planned to add a second phase consisting of 141,000 square feet if the center succeeded. It did. The Ridgewood Theater was late in the second stage of the Center. Ground was broken in May of 1967 and the theater was architected by Kynn Cole and built by M.C. Cole’s Ranco Development Company for $350,000 for the Interstate Circuit. The 866-seat theater would be patterned after the Westwood in Richardson and Hurst’s Bellaire theaters for Interstate. The interior of the Ridgewood was Mediterranean style used antique brick and had floors with a basketweave design, quarry tile. Wall to wall screen with an overhead vertical lift curtain with automatically controlled maskings along with stereo sound and auto dimmers in lighting made for a modern, versatile theater. The exterior also used antique brick.

The theater launched on December 21, 1967 with Disney’s “The Happiest Millionaire.” Interstate created a 10-minute film on the city of Garland that ran prior to the show. The theater became the 85th for Interstate. Hal Burreson was the first manager of the Ridgewood. The theater was community-minded booking local live acts occasionally and allowing benefit screenings periodically. Under Burreson, only G rated films were booked with only one exception: “Midnight Cowboy.” Burreson moved to the Medallion in Dallas when it opened in 1969 and was replaced by William L. Moyer. With a new sheriff in town, the Ridgewood changed fairly quickly. Moyer decided he didn’t want to be Garland’s babysitter and eliminated G-rated films. The adult-only R-rated policy was put in because of damage kids were causing to Ridgewood’s seating, the high volume of underage smoking, the cutting of electrical cords and general rowdiness. On Friday nights, Moyer said that “adults couldn’t even hear the movies.”

But in Garland, that sort of anti-family policy didn’t sit too well. So a public meeting was scheduled to deal with the vandalism issue at the theater and Moyer reversed course on the theater’s adults-only policy. (And Moyer said it had nothing to do with a short-term downturn of ticket sales.) The theater hosted a private advance screening of “Living Free” with stars Elsa the lion in attendance and the World Premiere of Semi-Tough with author Dan Jenkins in attendance happened at the Northtown Six, Ridgewood and Village on Nov. 13, 1977. The large lobby space allowed Interstate to take advantage of a pinball craze to install pinball machines bringing additional revenue. Entering the 1980s, the pinball machines would be replaced by video games as pinball lost favor. By the end of 1977, Interstate (then ABC-Interstate) had contemplated downgrading the Ridgewood to discount, dollar status. But it said that wasn’t the right play for the theater or the community.

In 1978, ABC-Interstate sold the theater to Plitt group. The theater began a minor descent thereafter as the theater was relegated to discount, dollar status by Plitt, then it was twinned, and – most embarrassingly – closed by the fire marshal for life-threatening fire exit problems on October 14, 1984. Then theater manager Timothy Langevin was arrested on three counts of fire code violations. Though it reopened shortly thereafter, the Ridgewood halcyon days were over as it soldiered onward as a twin discount house existing in a multiplex world. It would finally close. The Ridgewood’s days were not over as it was used for live theater in two years for religious plays and functions in 2001 and 2002. It was booked as a special events center during the 2000s. And late in the 2000s, it became a club featuring live music which was not a success. As of the 2010s, the Westwood was vacant but seemingly ready for the next potential tenant with a dream.

Great little theater. I have fond memories of seeing movies there in 1985.