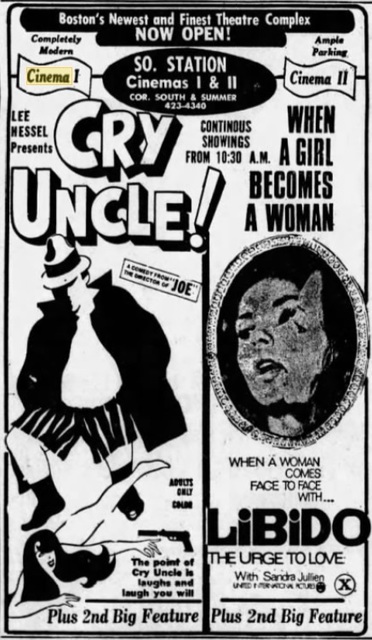 A small cinema located about a block away from South Station on the other side of what is now the “Big Dig” artery and close to Chinatown. It opened on December 24, 1971 as an adult cinema screening ‘straight’ movies. By the mid-1970’s it was screening ‘gay’ adult movies. It was still open in 1983.

The North Station was just the one room at that locale. Can anyone with any knowledge of this era end something of a debacle for me? There has been conjecture for years as to a film called “Him,” concerning some guy’s fixation on Christ. This has made it to such illustrious heights as becoming a faux legend with Michael Medved and his book about “Golden Turkeys.” People have looked at me like I am from Pluto when I have told them that, YES!, I have seen this film. I oft thought that the aforementioned advertisements in Boston After Dark or the Phoenix might lend some versimilitude to this conundrum, but I am 3,000 miles across the planet. Absolutely nobody can give so much as a ‘maybe’ on this. And a thanks to Mr DeLuca for knowing so much as to ownership of said theaters. Verify! Thanks!

My copy of the Bob Damron Address Book;1977 edition (a gay guide to the USA) gives the address of the South Station Cinema as 23 South Street, Boston, MA. 02111

Since this new development incorporates the old faÃ§ades of four buildings it replaced, it’s possible that the former South Station Cinema’s front entrance is still recognizable. But I don’t remember any more what it looked like. Perhaps someone else can help here.

John Mitzel now runs the Calamus Bookstore, at 92B South Street, just a block from the former site of the South Station Cinema. I e-mailed him months ago asking for his help with this page, but got no answer. Maybe I’ll drop in there some time.

With the information provided by Mr. DeLuca, I did contact and did receive a reply from John Mitzel (bless Google), per my request for any info as to this film “Him,” of which he could not offer any further elucidation.
Way back when (mid ‘70s) it was operating – and, boy, was it operating – there was a restaurant/bar connected through the toilet area in the rear of the two auditoriums, on the right side. Drunken couples could and did chance through this portal into the middle of whatever was transpiring there, very Alice Through The Looking Glass with a pinch of Bedlam. Ah, memories.
The entrance faced South Station, where the building it was housed in came to that point. Ticketing on right, entrance slightly to the left, and projection booths immediate in the entry, with doors to the two theaters on either far side.

In this newsletter, Mitzel says he ran “the fabulous South Station Cinema” from 1972 to 1983.

The poster who described where the Cinema was located has it right that it was on the corner on the left-hand side of Summer Street, just after crossing Atlantic Avenue coming away from South Station, or kitty-corner from across Atlantic Avenue where the newer Federal Reserve Bank a/k/a “Washboard Building” is located. Actually, visualizing it in my mind, it might also have been almost just across the street from the noted “Lollipop Building,” also known formally as the headquarters of Blue Cross/Blue Shield. There has been much construction in the downtown area in the last few decades, what with many office locales receiving the geographically-ambiguous addresses of “Pick-A-Number Place.” But according to my recollection, where that previous poster stated the South Station Cinema was located sounds good to me!

I will share this one personal anecdote: I had an encounter at the South Station Cinema with one similarly-aged young man (we were both in our late teens/early 20s), who was then living with his uncle—a priest—in the rectory of his uncle’s church! Because there was so much action going on in the theater’s men’s room, and after assessing the cleanliness of the scene, and some initial foreplay in the row where we were seated, we drove out to a wooded area in my hometown and liasoned further in some bushes, got eaten alive by mosquitoes in the process!

And, oh yeah—I can’t remember the names of the films we watched at the South Station Cinema that evening!

Reposted from another site (this was not written by me nor was it my experience):

“A year after graduating, dammit, the Adonis closed before I got to visit.

“However, the new downtown, all-male South Station Cinema opened. I was 18-19 at the time. This was also around the same time when Linda Lovelace and her movie, "Deep Throat” was a huge hit at the Pru Cinema (short for Prudential, near Copley Square). It was then that I knew that if sex on screen between straight people (yes, I saw Deep Throat) was at the Pru, I figured that sex between men must have happened at the Adonis and now at South Station with the “All Male Cast.”

“It took me a while to get up my nerve, but one day I decided to pay a visit to the South Station Cinema. OMG, it was amazing. I was nervous, scared and hugely turned on. The sex on screen with men-only was more than I imagined. And then this gentleman movie attendee lured me into a corner. It didn’t take much to persuade me. We got busy in no time — after thinking about it for years, I was finally having sex with another guy. There were fluids everywhere, but I didn’t care. I had reached nirvana.”

The South Station Cinema I & II opened on December 24th, 1971 by Esquire Theatres. Adult movies on the opening program