AMC The Parks at Arlington 18 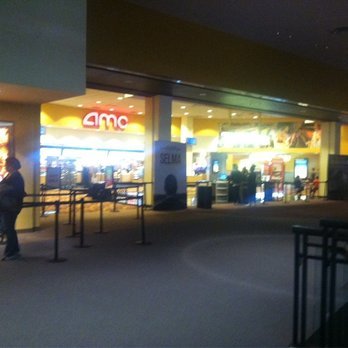 Located inside the mall the 18 screen Parks at Arlington is an all stadium theater which opened November 8, 2002. Tickets are purchased on the lower level with two sets of escalators on each side of the box office leading up to the lobby of the theater.

The auditoriums are small but comfortable with great viewing lines and excellent sound. The concessions has eight stations. The lobby walls on the upper portion are covered with large portraits of movie stars of the past and present. AMC has done a great job on design and comfort at this theater.

The Perkowitz + Ruth architected AMC Parks 18 megaplex was nothing short of a bombshell in South Arlington opening November 6, 2002. The 18-plex occupied 72,800 square feet with 3,360 seats—auditoriums ranging in size from 100 to 350 seats. Its announcement in 1999 as a 4,000 seat 24-screen multiplex had employees at aging Arlington multiplexes updating their resumes as the theater’s footprint would impact the AMC Green Oaks, General Cinema Arlington Square 8, UA Bowen. AMC Festival (former Forum), Loews Lincoln Square, and Loews Cinemas 20 & 287, all of which would close due in part to the Parks. The megaplex was in and multiplex was under pressure.

In 1995, Homart was purchased by General Growth Properties and that same year the AMC Grand in Dallas revolutionized film going for the area. General Growth announced an AMC property inside its new Stonebriar Mall in Frisco, TX in 1998 and had already plotted how to renovate its aging Parks property even prior. In talks for several years with AMC regarding the Parks the announcement came in 1999 and the AMC Parks opened in 2002. There was no questioning the impact of the project to south Arlington. General Cinema would bail out of its neighboring Arlington Park Square 8 and all other Tarrant County locations on October 5th, 2000 even prior to the AMC Parks facelift finishing, leaving the mall area theaterless until 2002.

The AMC Parks 18’s overall theme was called Film City and upped AMC’s more benign Stonebriar 24 in Frisco with more design flair. Hallway walls had murals of movie stars and the terrazzo floor design had famous movie quotes, “Here’s lookin' at you, kid!” and “We’re not in Kansas anymore” among them. A similar design would be used at Dallas’ Valley View 16 and elsewhere across the country. Ample legroom, with each row 18 inches higher than the one in front along with AMC’s loveseats were there. The theater went all in for Sony Dynamic Digital Sound is in all auditoriums. The theater had a single large concession stand opting for vending machines near each auditorium rather than the multiple concession areas tried in other area AMC multiplexes.

Its November 6, 2002 opening would spell the end for the area’s multiplexes associated with the major chains. The Loews properties would be bulldozed. The General Cinema property became home to the Arlington school district. The former AMC Green Oaks and Festival became Movie Tavern and dollar house locations and the UA Bowen – which, itself, was ticketed for a megaplex makeover that never happened – became a storage facility. While competition came in the form of a nearby Studio Movie Grill in January of 2007, the AMC Parks continued to thrive into the 2010s.

I hear that this mall is starting to die out. Is this true?

I know you asked your question a few months ago, and may have already gotten an answer elsewhere, but I thought I would reply anyway.

The Parks Mall at Arlington is not starting to die out. When I walked through it two weeks ago, there were only three truly empty spaces. These spaces formerly contained iSmile Dental, Best Buy Mobile, and Twins. In addition, several stores have recently remodeled and/or moved into a bigger space, including Zales Jewelers, Bath & Body Works / The White Barn Candle Co., and Cotton On.

While the mall will soon have two more vacant spaces when the bankrupt Payless and Gymboree stores close down, I don’t think this mall has anything to worry about.