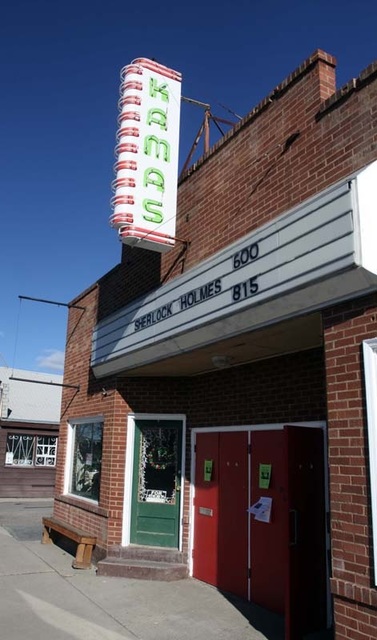 Competition from video rentals, in a town with only 1,300 residents, caused the theatre to close. The theatre stood vacant for two years before being rediscovered by Don Spencer, a successful hypnotist who has performed for audiences in Salt Lake for over the past five years.

Spencer restored the theatre and transformed it into a Saturday-night talent search center and occasional playhouse, offering music, stand-up comedy, plays, old movies, variety shows, and, of course, hypnotism. It was closed in December 2014.

Just an update on the Kamas Theater. It is currently open for first run and second run movies. This winter, supposedly the marquee is going to be taken down to be repainted and relighted. It really needs it, as the paint is very faded and the only neon that works is the word Kamas on the right side.

Every month there is a drawing for $100 cash which you enter by writing your phone number on your ticket stub. I have been going there almost every sunday for the last 4 months and still haven’t won it. Oh well. I drive 40 minutes each way, as there is only one single screen theater near me, but it plays mostly childrens movies. It’s a long drive just to see a movie, but it is well worth it.

If you are ever visiting Park City, Utah and want to see a movie, skip the two multiplexes up there and take the 20 minute drive east to Kamas.

You can check showtimes Here

Here are some more pictures of the outside at night and the inside, including the screen and concession area, taken by me and hosted on the wonderful utahtheaters.info website.

Here is some more info taken from the Kamas Theater page on utahtheaters.info, located Here

The Kamas Theater is the only movie theater in the rural Summit County town of Kamas, which only recently got its first tricolored stoplight.

The theater was built in 1942 by Douglas Simpson and Glen Gibbons as a replacement for the Kamas opera house, which was destroyed by fire earlier in the year.

â€œEverybody thought we were crazy, but it worked beautifully and everyone loved it,“ Simpson said. The theater, which cost $60,000, was almost paid for when television came to town nine years later. "We thought another depression had hit, but it wasnâ€™t a depression this time, it was television. Everybody quit going to the show and for the next nine years we didnâ€™t make a cent in the show business, but we did keep it running. Then business got a little better, and we started making a little money.â€

In 1972, Douglas and Teen Simpson sold their share of the Kamas Theatre to their partners Glen and Gwen Gibbons. Douglas Simpson, who was born in 1899, wrote, â€œI think being born at that period of time made my life very interesting and exciting because, it seems to me, that everything we have now has been invented and developed during my life.â€

In 1999, competition from video rentals, in a town with only 1300 residents, forced the theater to close. The theater stood vacant for two years before being rediscovered by Don Spencer, a successful hypnotist who has performed for audiences in Salt Lake for over the past five years. Spencer planned to restore the theater and transform it into a Saturday-night talent search center and occasional playhouse, offering music, stand-up comedy, plays, old movies, variety shows, and, of course, hypnotism.

By 2003 the Kamas Theater was once again closed, but the Sundance Film Festival showed “Whale Rider” at the theater that year anyway. Sarah Komarek, in charge of Sundance’s outreach program, said, “We love these theaters. We want to support them and help them stay in business.”

On 26 December 2003 the theater was reopened by Phil Clegg, a former resident of Kamas who recently took over management of the Towne Cinemas in American Fork. Although Clegg only signed a one-year lease, he has already made improvements, such as replacing the theater’s 283 seats.[5]

On 21 January 2004, the Kamas Theater hosted a free screening of “Seducing Doctor Lewis” as part of the Sundace Film Festival’s community outreach program. Even though people attended the screening of from as far as Utah and Salt Lake counties, the theater was far from packed. Although “Seducing Doctor Lewis” is a charming and innocent comedy about a small fishing village’s efforts to attract a permanent physician, the word “seducing” in the title caused some residents of the religious and conservative town to think the film was R-rated.

Status should be closed. Theatre went dark in December 2014.