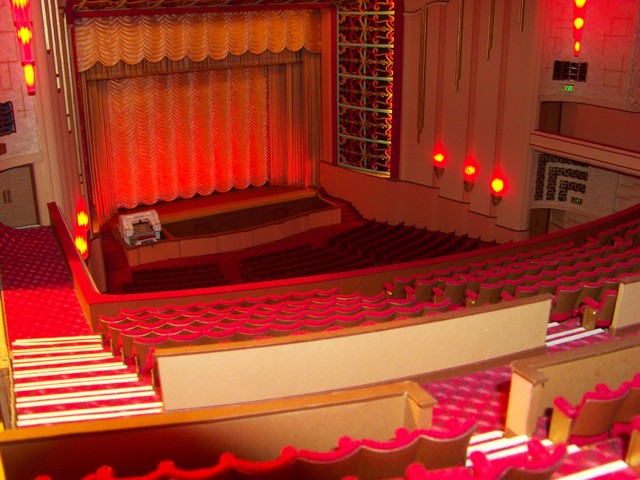 The Paramount Theatre opened on 4th September 1937 with Errol Flynn in “Charge of the Light Brigade”. It was one of seven Paramount Theatres built in major UK cities by the American owned Paramount Theatres chain; Leeds, Liverpool, Manchester, Newcastle, Glasgow and London (Tottenham Court Road) were the others. The original seating capacity was for 2,439 with 1,517 in the stalls and 922 in the circle. It was equipped with a Compton 4Manual/10Rank theatre organ which was opened by Al Bollington. The Paramount Theatre had a large stage, dressing rooms and a cafe/restaurant.

On 25th August 1942, it was sold to Oscar Deutsch’s Odeon Theatres Ltd. and it was re-named Odeon on 29th November 1942. In the 1960’s the Odeon was used for many ‘One Night’ concerts by pop groups, including The Beatles. In April 1965 it was closed for a period while major modernisation was carried out, removing most of the original Art Deco style decorations, and it re-opened on 24th June 1965 with “Genhis Khan” and a 30 minutes stage show starring Cliff Richard and The Shadows.

On 26th May 1988 the Odeon was closed for conversion into a six screen cinema, which re-opened in August 1988. Unfortunately, the Compton organ, which had still been used for concerts, was dismantled and sold. In 1991 two additional screens were opened in the former restaurant area and a former bar in the basement.

The cinema used to have a very ornate auditorium until it was altered. Now it is all very plain, including the foyer entrance. The last refurbishment was carried out in 1998 when an eighth screen was added. By 2013, it was the only one of the seven original U.K. Paramount Theatres still operating as a cinema.

Leslie Holderness ended up a Supervisors for the Clifton Cinema Circuit.. There is a picture of him on the Regal Wolverhampton listing (First Left)

Thanks. Another anecdote: An Associate of the Royal College of Organists criticized Raymond’s playing to Leslie Holderness. My father entertained the visitor to tea in the theatre cafe.Must ave been 1941 or so. Nevertheless he did not replace him. In ‘38 the BBC wanted to wire the Paramount for organ broadcasts. However, like the artist he was, Arthur declined the offer until remuneration was offered. It wasn’t; so the broadcasts never aired.

Hooray! Managed to transmit photos: Clockwise: upper left:projection room in November 1942 showing “The Great Mr Handel” (first British colour feature),Gene Autry with Sid Lewis of Loughborough Cinema group, August 17, ‘39. A Commissionaire with a bevy of Usherettes, and finally Charlie Gregory, the stage manager. He is on the right of the two images. He used to go to the wings of the stage a turn a wheel which brought up all sorts of coloured lights at the beginning, or dim them at the end of the picture. It was real showmanship in those days.

I’d like to show a snap of Mother and myself in 1938 but it was deleted.The point was that it showed the OTC uniform worn by me for the early December 1939 stage tableau at the Paramount mentioned in an earlier comment, and it was taken by my father, Arthur Raymond.

I apologize for taking up so many comments, but I get quite nostalgic for those old times and places.

The Compton organ is now owned by the Penistone cinema organ trust. It installed in the Paramount! theatre Penistone.

Just a thought. Before the Odeon Take over. The cinema was straddled by German Bombers. Buildings in the Front of the Theatre and the Futurist at the other end of New Street Station which got hit twice Totally missing the Paramount. I suspect it was this action that made Paramount sell its Cinemas in the Provence’s

In 1984 Cyril Barbier, based in Birmingham, started work on a one-thirtieth scale model of the Paramount as it would have been after the takeover by Odeon. This was a true labour of love, and the painstaking detail involved meant that it was not finished until 2012 - a staggering 28 years later! By March 2022 the model, which measures 8ft by 4ft, was on display at Paul Kirner’s Music Palace at Porth, South Wales, where I was able to view it. It really is exceptional: the seats tip-up and the organ rises from the orchestra pit! I have added some photos here - clearly marking them as being of this model!