Devon Theater for the Performing Arts 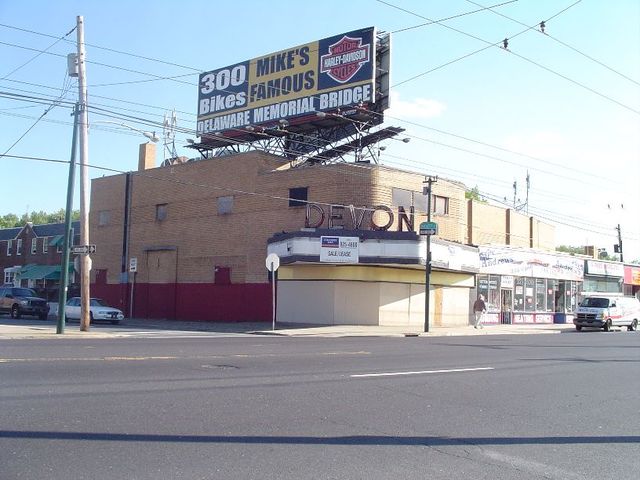 Located in the Mayfair district of Philadelphia. Designed in late-Streamline Moderne style by the architectural firm of Thalheimer & Weitz, the Devon Theatre opened on October 1, 1946 with John Loder in “The Wife of Monte Cristo”. It had 878 seats, all on a single floor. A feature of the auditorium were large mural plaques midway on the side-walls over emergency exits, which depict Classical female figures with movie camera and the ‘Oscar’ statue. The plaques were back-lit.

After a few years of lying dormant, it was renovated for use as a performing arts center. The Devon Theater for the Peforming Arts opened on March 27, 2009 with a stage production of “Nunsense”. It was closed in January 2011. It reopened on May 15, 2015 as the Devon Concert Hall, but this too quickly closed and in June 2015 it was purchased by the Kingdom Life Christian Center.

The answer to Howard’s question is yes, the Devon Theater for the Performing Arts is closed. As for the marquee confusion – MARQUEE SPONSORED BY DREXEL UNIVERSIY – appears on the bottom right corner of each of the three faces of the marquee. This is in recognition of Drexel’s financial contribution for the new marquee. DEVON remains the name of the theater! Also, the last time I looked, the marquee also reads AVAILABLE. If anyone has further information on the future of the Devon, please share, and thanks!

My Company recently acquired the Devon Theater. If anyone is interested please reach out to me directly at JoelEl Capitan Theatermile.net

Sorry it does not look like my email went through properly. Try my other email at

I guess the Devon can be officially listed as CLOSED now. It doesn’t appear that the new owners are going to reach out with their future plans. Only then might best wishes be in order. Until that time, it’s wait and see!

I am interested in finding out who is the owner of the Devon Theater…Is the this theater still for sale? I am very interested in any information or leads anyone may have… my email address is Thanks.

I just received a robocall about a community meeting re a church’s planned reuse of the Devon Theatre.

It’s been 15-months since Joel told us his company aquired the Devon Theater. In those 15-months, not a peep! Thanks Joel for keeping us informed!

Now we have learned that a church — Kingdom Life Christian Center — has bought the former Devon Theater property. Not sure if that includes the adjoining six stores.

A proposal is now before the Zoning Board of Adjustment for a church, daycare center, and a food bank. What comes next, a drug and alcohol rehab center?

It appears the church group bought the theater before it sought any input from the community. It’s like closing the barn door after the horse gets out!

When representatives from the Mayfair Civic Association approached the church group about community useage of the building, they were refused, saying the church deemed it excessive.

There doesn’t seem to be any room for compromise!

Just to fill in some details, the Devon opened October 1, 1946 as a post-War theatre with no stage, a glass curtain and the opening film, “The Wife of Monte Cristo.” It quickly became a grind house with continuous double features closing at the end of a ten-year lease in 1956 and was offered for lease. It reopened with the same policy unsuccessfully in 1957. In August of 1958 under new operators it found its footing with double-feature art films with provocative titles and ads.

The venue was rebranded as the Devon Art Cinema in 1959 with “sensational” films and Philadelphia premieres. On October 5, 1960, the venue became the AAA Art Devon Cinema advertising “triple ‘AAA’ films” or code for something better than an X-rated film. (The name “AAA Art” was used to get a prime listing at the top of the movie listings.) It earned if not relished its nickname among locals as the “Dirty Devon.” A policy change at the newspaper (if not the phone book) changed that and the theatre returned to Devon Theatre with an adult policy that lasted to the end of a 20-year lease.

On November 22, 1978, the theatre announced a new family-friendly policy as a sub-run discount house showing 99 cent mainstream films. This policy proved incredibly successful even into the home video era. The Devon appears to have ended operations with “The Contender” on November 9, 2000. The stage-less movie house was then equipped with a stage in March of 2009 going on a neary two-year venture in legit theatre: the Devon Theater for the Performing Arts beginning with “Nunsense.” The art center closed in January of 2011. On May 31, 2015 it had a grand reopening as the Devon Concert Hall with live music events. That, too, closed.