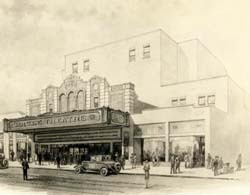 Built on the site of the Empire Theatre (aka Northwood Theatre). The Circle Theatre opened April 30, 1929 with Thomas Meighan in “The Argyle Case”. It was designed by the firm of Hoffman-Henon Co. The Circle Theatre was Philadelphia’s only Atmospheric style movie theatre. It was equipped with a Kimball 3 manual 15 ranks organ. The console was on a lift in the orchestra pit. It had a fully equipped stage and four floors of dressing rooms. Initially it presented movies only, but from February 6, 1932 stage shows were added to the program. From the 1940’s it was back to movies only. In the early-1950’s the organ was removed from the building.

The Circle Theatre closed on December 6, 1953 with Gary Cooper in “Blowing Wild” & John Derek in “Sea of Lost Ships”. The lobby and the area of the orchestra level under the balcony have been converted into retail use. The remainder of the auditorium décor survives, but is not open to the public.

The Kimball organ from the Circle Theatre appears to have been removed and reinstalled in Saint Paul’s Episcopal Church, Malden, MA sometime in the 1950’s based on this and other links…

I was told an apocryphal story that most of the Stanley-Warner organs (virtually all S-W organs were Kimballs with six notable exceptions) were removed from theatres and stored in the basement of their flagship Mastbaum theatre, and that row after row of Kimball consoles were seen, waiting to be sold off.

Photos 8-21-08 of pinnacle of front facade of Circle by Rob Bender:
View link

Here is an interior photo circa 1929 from the Irvin Glazer theater collection:
http://tinyurl.com/o2s7l5

Perhaps because links don’t auto link, I neglected in June to post this link here of current photo of auditorium facing stage! follow link to photo of lighting control panel, too http://theatrehistoricalsociety.wordpress.com/2011/06/18/philadelphias-circle-theatres-atmospheric-auditorium-seen-again/

Thanks for the link Howard!

The link for Howard Haas’s photo of the Circle Theatre interior has been moved. Here is the link for the blog posting:

This opened on April 30th, 1929, just one day after the opening of the State. Grand opening ad for both theatres can be found in the photo section.

Stanley Warner closed the Circle on December 6, 1953 with a double feature of :Blowing Wild" and “Sea of Lost Ships.” According to the local paper, the theatre building was repurposed for retail stores in July of 1954 and then sold in late April 1955.