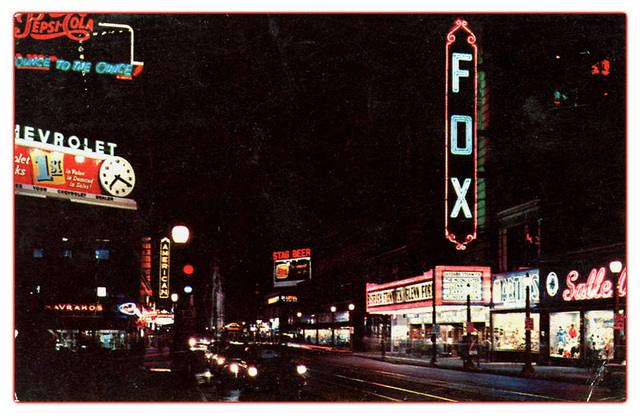 The American Theatre had three balconies with three tiers of ornate side boxes. This American Theatre opened offering vaudeville acts and it became the number one house in St. Louis. It also showed movies. In 1918 it changed from vaudeville to legitimate theatre. In 1953 Cella sold the building to another firm which had it and the American Hotel razed and a 1,500 car parking garage was built in its place.

Theatre opened as a vaudeville house in February 1908.

The architect of the house was F. C. Bonsack.

Seating capacity was 2117. The 3rd balcony seating capacity, 410, was usually deducted from the total as these seats were rarely sold in later years.

The American became, briefly, a true film house in 1915 when it became the exclusive home of first-run Triangle films.

In 1918, management of the theatre was taken over by Klaw & Erlanger, and it was at this point the theatre began the policy for which it is best remembered, as a legitimate theatre.

However, during the 20s and 30s, many films were shown here on a reserved seat basis. Such films as “The Thief of Bagdad,” “The Ten Commandments,” “Ben-Hur,” “Old Ironsides,” “Wings,” “Rasputin and the Empress,” “Dinner at Eight,” “The Great Ziegfeld,” “Lost Horizon,” and “The Life of Emile Zola.”

Theatre closed in May 1953. Since the name “American” had become synonymous with legit theatre in St. Louis, the name was moved to the old Shubert on Grand Avenue.

Original plans to build a 1500-car multi-story parking garage
were abandoned and the final 500-car parking lot was a basement and surface lot only.

ST. LOUIS â€"A St. Louis landmark for 46 years, the 12â€"story American Theater and Hotel Building will he razed soon to make way for a l.5 million dollar parking garage. The downtown building will be torn down soon after the theater’s current season ends May 2. American Theater productions will be moved to the midtown Shubert Theater.

The multi-story garage will house 1,500 cars when completed. Three other buildings are to be razed in addition to the hotel and theater structure.

I think there were plans to build the 1500 car garage, but as he stated those plans were abandoned later and the garage was downsized.

Chuck, you seem to be correct. According to
this site, the hotel sits in the exact spot you mention. The building is listed as the American Hotel, but it also mentions the theater. It also includes a couple exterior photos.

The photo above, it should be noted (the one I’m looking at presently has the Fox in the foreground) depicts the American’s Grand Avenue location.