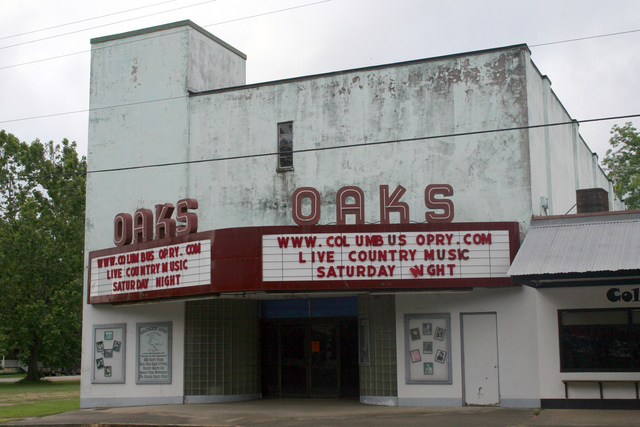 The Oaks Theatre opened in 1936 seating a little over 400. It remained a movie theatre until 1996. In 1996 it became the home of the Columbus Opry Co. They put on a Country Western show every Saturday evening until it was closed in July 2006. The theatre is used for other live productions also.

The theatre is a two story building that at one time was painted all white. It could use a coat of paint again but the interior is in great shape. The theatre has a triangular-shaped marquee with attraction panels on each side and still in use. The marquee is trimmed in red with large letter on each side spelling out “Oaks”.

for sale on loopnet

The June 19, 1946, issue of Boxoffice said that Mr. and Mrs. T.W. Mattern planned to open the Oaks Theatre at Columbus in September. The item referred to the theater as a 650-seat house “…new from the ground up.” Another brief item in the same issue (actually on the previous page) gave the same projected opening date, but listed the seating capacity as 624.

On December 7, 1964, Boxoffice reported the death of exhibitor W.A. Struss, who had built the Orphic Theatre in Columbus in 1929. The obituary said that Struss had bought the Oaks Theatre from Tommy Mattern in 1947 and operated it until his death.

In 1968, the Oaks was one of many theaters in Texas that were part of the circuit operated by Rubin S. Frels. Frels had been the booker for Struss’s Orphic, and the association continued when Struss took over the Oaks the year after it was built. Frels had a long association with Columbus, having bought the Columbus Theatre there in 1928, according to Motion Picture Times of August 4 that year.