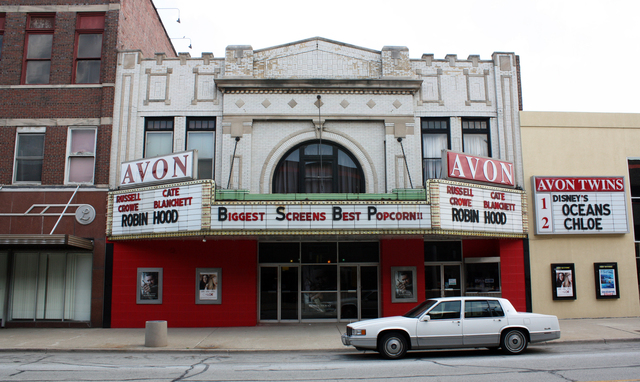 The Avon Theater opened November 28, 1916, as one of the most lavish theaters in Decatur, and considered by many a waste at the time, because it was built specifically for movies, which were considered in those days only a fad which would soon pass. To address these concerns, the theater had a small stage for the occasional live performance or concert.

However, movies were here to stay and the Avon became one of the most popular theaters in Decatur, rivaling the Lincoln Square, built the same year, and the older Empress.

It had one of the largest screens of any theater outside Chicago when it opened. Its opulent decor featured fancy plasterwork, sculpture (a nude reclining goddess holding out a crown of laurel was at the top of the proscenium arch), and unusual lighting fixtures in the shape of lion’s heads which were found in the auditorium.

In the early 1950s, the Avon was considered outdated, and received an unfortunate ‘modernization’, which destroyed much of the splendid original decoration. Also, a wide screen for Panavision and 3D films was added in front of the old one, covering up the old little stage and orchestra pit area, as well as the goddess sculpture.

The Avon hung on, slowly declining until the mid 1980s, when it finally was forced to close. It opened briefly again in 1993 as a second-run house, but closed again after less than a year. It remained empty another six years, before receiving a much needed restoration by its current owners, and reopened in 1999, screening art and foreign films, as well as the occasional mainstream hit. In the last few years, the owners have turned adjacent former storefronts into two smaller screens, making the Avon a triplex.

The Avon is rumored to be haunted by the ghost of its original owner, who even after selling the theater in the 60s, maintained an office upstairs, where he eventually died.

The architect of the Avon Theatre was R.O. Rosen, who designed the theatre to seat 1,080 in orchestra stalls and balcony levels.

The Avon Threatre was recently remodeled within the last few years into the Avon Twin. Thankfully, the original construction was not chopped to pieces— the building next door was opened up to feature a second screen.

This is a fabulous, old-timey theater. Before each feature, a short cartoon or comedy is screened. From Mickey Mouse to the Three Stooges, owner Skip Huston wants to make sure his audiences enjoy a trip back in time while enjoying the films of today. At about every showtime, Skip will stand at the back of the theater and when a preview ends, he’ll shout out when the movie will be playing. Such a wonderful person who teems with the joy of owning his own movie theater. Don’t miss going to the Avon if you’ve never been. The ghost stories are worthwhile, too, even if you’re a non-believer, and Skip is always open to talk!

An article about this theater’s decision to dump 3D: View link

I uploaded its grand opening ad in this theatre’s photo section.

Skip has been holding film retrospective classes at The Avon for well over a decade. The classes typically run 8 weeks and each session follows a particular theme, however, Skip does not announce the title until he gives his pre-showing introduction, which often is a very interesting historical tease. After the film, there is a class participation discussion about the film, which sometimes informally spills out onto the sidewalk outside the theater lobby (weather permitting), hardcore students, only.

Any pics of the auditorium? Sounds beautiful. Good this place is still around.