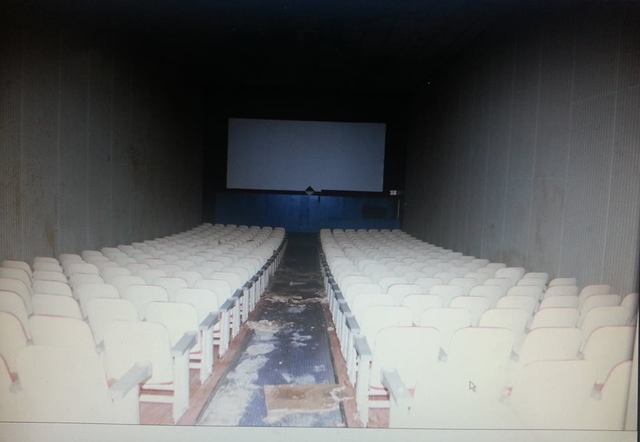 The Cinema and the mall opened July 27, 1978 as a triplex with three side-by-side auditoriums and was one of the last of the Riseman designs for GCC - red carpet - white candy stand - red and blue wallpaper in the lobby, with gray Alpro paneling and white and red Griggs seats in the auditorium.

It closed in 1996 when the mall went into severe decline. It sat along with the rest of the mall closed and abandoned until it was demolished in March 2013.

It does stink, but we all knew it was inevitable. Like you guys, I just wish we had had the chance to go in and see it for one more time. Well, even then, what we would’ve seen wouldn’t EVER match up to what we remember, right? Cinema 1 had the door going up the stairs, the letter room was behind the screen…Cinema 2 was where “Rocky Horror” played, no place to stand in the back except right in front of the lobby door…Cinema 3 had the handicapped bathroom (2 bathrooms, actually) and it was the theater that people who snuck in seemed to always be in. In the small lobby, there was the place under the stairwell that used to be a closet for the drink tanks, then it was converted to a mini (and I do mean mini!) arcade, with about 3 or 4 games that brought in a TON of quarters! Upstairs was the projection booth that belonged to Chuck Dray (make NO mistake about that!!), with his spotless everything, including HIS bathroom! And anyone that knew Dray, knew he had a great “library” up there! Dray used to get away with MURDER when he was downstairs, drinking his coffee by the ticket box….when a good-looking girl would walk by, Dray would say “Ooo-0oo….foooooooood!”! Can’t believe that ticket box was NEVER robbed!! I mean, No glass, no nuthin'! Anyone could’ve just reached over, grabbed some bucks and just ran out the door! Boy, were we ever lucky! Oh, well. Could go one, but that’ll have to be for another time. Thanks guys!

i have another picture of chuck to put on my general cinemas days photos, also on facebook two great fan pages,which i have put a ton of pictures on..

Russ, pretty sure “ROCKY HORROR” was in number one most of the time…I wish i could just get those pictures from BARRY that he has on ROCKY HORROR….Just to make copies..

the cinemas certainly changed my life…..

FOUND An “EMPIRE STRIKES BACK' ad,putting it on my FB page soon..

looking forward to seeing RUSSELL and Charles next week for a get together over dinner, I guess a few theatres still manage to get together..

I have a few memories of Regency Mall, and seeing movies. I do believe it is at the eight screen theater. I know it was free kid shows, early 1990’s. I wish I had memories of this place, sounds like a fun place to see movies. So sad everything is gone now.

yep, very sad. the 20 plexes of the world pretty much help do them in and I think it stinks..

The whole mall was gutted… its just a big shell now, my cinemas in the dump.