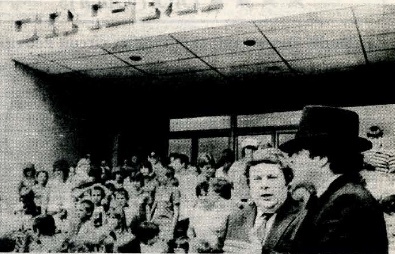 This nondescript two screen theater was situated in a small shopping center that was located at the intersection of Winter Street and Route 128 in Waltham. The Waltham Cinema was part of a small chain of discount houses (showing second runs only) in the Boston area owned by General Cinema. This cinema opened May 26, 1971. I remember seeing “Fiddler on the Roof” there when the cinema was considered relatively new.

As with many discount houses showing second runs, the Waltham cinema didn’t survive the advent of home video and closed in the early-1980’s. Part of the cinema’s space was ironically taken over by a video store called Instant Replay.

Following up on the above comments about there being another theater on Winter Street in Waltham in addition to the General Cinema “buck house.” I am familiar with the area, having grown up in Weston during the 60s and 70s and my family still lives there (the Waltham/Weston border is very close to Winter Street). There was only one theater on Winter Street: the “buck house.” Unless the Globe article is in error, the only possible explanation that I can think of is that the “buck house” was acquired by the Flick chain from General Cinema, probably no more than a few years before it closed in the 80s. The only other theater closing in Waltham in the past 40 years or so was the old Embassy theater on Moody Street.

I remember the Waltham Cinema I and II quite well, despite my having gone there only once or twice, and it didn’t have nearly the feel, decor and magnetism that the old, original Embassy Theatre on Moody Street did. The intersection of 128 and Winter Street, which was right near the Lincoln-Waltham border, was not the best location for a cinema, especially because the cinema was so isolated and secluded. Moreover, it was close to the part of Winter Street, near the Lincoln-Waltham border, which was a notorious Lovers' Lane—people would regularly go there, park and make out, at all hours of the day, but especially at night. Not only was that stretch of Winter Street near the Waltham Cinema a notorious Lovers' Lane, but there were also a lot of fights down there, and one girl even got assaulted, at one point.

In an even grislier scenerio, there was an incident back in the early 1970’s, where a bunch of high school kids from Lincoln-Sudbury Regional High School were out on a double date one Saturday night, when, for some reason, they hitched a ride and got picked up by a couple of men who, although they were clearly intoxicated, didn’t seem unfriendly. The girls were let off before the guys, but then, things took a nastier, more vicious turn. One of the boys received a concussion from being hit over the head with a blunt, heavy instrument, and the other one almost got run over by their attacker’s car while they were escaping and going for help.

My hunch is that the Waltham Cinema failed after a relatively short stint due to its secluded location, the kind of movies that were played there, and the fact that this area was kind of a rough area where many people probably didn’t feel safe going into at night. But that’s my guess.

Hi, ErikH. I grew up in a town that abutted Waltham, and remember the old, original Embassy Theatre very well. My sister and I often went to that movie theatre as kids, with friends, by ourselves, or with family, before we were of the driving age. A very elegant, baroque-looking theatre the old, original Embassy Theatre it was…both inside and out.

Interesting comments MPol; I wasn’t aware of those problems. During the 1970s, I would often bicycle over to the cinema with friends to catch a weekend matinee or go to an evening show with family (with dinner at the Chinese restaurant in the same building as the cinema either before or after the movie). Never felt unsafe.

Not sure I would agree, though, that the Waltham cinema failed for reasons of location or the type of films that played there (unless you are referring to second run films in general). While the cinema was located in a commercial/industrial area, its location by the Winter Street exit off of Route 128 meant that it was easily accessible by car. During the 1970s, sellouts on weekends were not uncommon. I remember that “The Sting” played there for many weeks during the summer of 1974—-more than six months after the film had opened in first run. “Jaws” and “Star Wars” also had extended runs there—-many months (and in the case of “Star Wars,” probably more than a year) after they had debuted in first run.

What caused the Waltham cinema to close probably had more to do with industry trends, such as the sharp reduction in the second run market due to the exponential growth of home video in the 1980s. And theaters with a single screen or few screens were on the decline as well, due to the economics. The placement of the Waltham cinema within that office/retail building made expansion impossible, and the cinema’s two small auditoriums were clearly unsuitable for subdivision into additional screens.

I only went to the old Embassy on Moody Street once (I think the film was “With Six You Get Eggroll”), and remember it as very atmospheric—-it could not have been more different from the mundane cinema by Route 128.

Hi, ErikH. Thanks for your input. I see where you’re coming from regarding bicycling to the cinema with friends to catch a weekend matinee, or going with other people (i. e. family or whoever) during the evening hours, but, as a woman, I was not really comfortable with the idea of going to such a secluded place by myself in the evening, particularly because of the problems that they did have there at that time. Don’t know what that general area’s like right now, but regarding that grisly incident I mentioned in my earlier post, that secluded area by the Lincoln-Waltham line is where those two teenaged boys got taken, and badly beat up by a pair of nasty drunks who’d picked them up. Scary indeed.

You’re right, thought about economics, industrial needs, the proliferation of home video in the early 1980’s, and the lack of room for the Waltham Cinema’s expansion due to that office retail building.

As kids, my sister and I frequently went to the old, vintage Embassy Theatre in Waltham, on Moody Street, either by ourselves, or with our friends and/or family. That theatre was a real palace of a theatre—it was cool. Fond memories abound, but it’s no more, and, since I no longer live near that area, I don’t much think about it any more.

No pictures guys,such good stories no one thought to snap a few pictures.

I grew up in Weston and was a frequent visitor to the old Waltham General Cinema. As I recall, it was originally a first run GC house. As times changed, it downgraded to a buck house. I can still remember the GC jingle that played before each show. Lanai Island was the name of the Chinese restaurant next door.

This former Westonian paid many visits to the Waltham Cinema growing up as well—-it was always a buck house. On rare occasions the cinema would show first run films, which were invariably “B” movies that had bypassed nearby first run houses such as the GC Shoppers World or Loews Natick.

The Waltham Cinema opened on May 26, 1971. The initial attractions were second run engagements of the Disney film “The Barefoot Executive” and the Dick Van Dyke comedy “Cold Turkey.” Source: The Boston Globe.

Just wanted to mention a couple of things about this posting. First the Google maps picture has the wrong address of where this theater was. Second I added a comment to the one photo here that gives the correct address of where this cinema was. If you got off the highway coming from the north at Winter Street, there is a small plaza on the right as you come off the off-ramp. My wife told me there used to be a 2 screen cinema there. I saw an old placemat she has from the Chateau Restaurant in Waltham, that had an ad for the cinema on it. Its' address was 475 Winter Street, Waltham, MA. That’s where the new plaza is. Just wanted to help update your info.