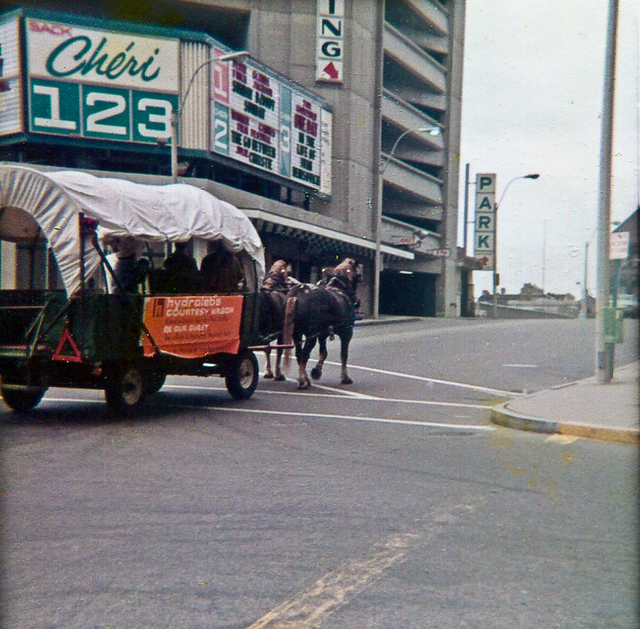 The Cheri complex remained in operation for about 40 years; few movie theatres in Boston have had such a lengthy life span other than the old movie palaces such as the Saxon, Savoy, etc. that have been converted to other uses. The first auditorium (with 800-seats) opened on February 16, 1966 with Marlon Brando in “The Chase”. The second auditorium opened in November, 1966 with Jack Lemmon in “The Fortune Cookie”. The third screen (i.e., the smaller auditorium on the upper level with the separate paybox) opened on July 11, 1967 with Walter Matthau in “A Guide to the Married Man”.

The Cheri hosted a number of roadshows during the late-1960’s, including “Funny Girl” and “Oliver!”. When “Funny Lady” premiered there in an exclusive run in 1975, one screen showed the film on a reserved seat basis and another on a general admission basis.

The larger of the two lower level auditoriums was twinned in 1989. Following the closings of the Charles, Cinema 57 and Paris in the early-1990’s, the Cheri and Nickelodeon became the top theatres in the city for major Hollywood first run releases (essentially by default; the only other theatre in Boston was the widely disliked Copley Place).

Attendance at the Cheri declined sharply after the opening of the nearby AMC Fenway in the late-1990’s and after a brief tenure as a discount house the Cheri closed in 2001 and is now a bowling alley and nightclub.

Whether the Cheri was deserving of such longevity is another matter. The auditoriums had mediocre sightlines, noticeably low ceilings and average sized screens. I don’t believe that any of the auditoriums were equipped for 70MM. Other Boston theaters of that era such as the Paris, Pi Alley (prior to twinning) and the main auditorium of the Charles complex were much more impressive.

I attended a sneak preview to Return of the Living Dead at The Cheri in ‘85. An amazing experience due to the “audience participation” from the highly animated crowd.

While visiting in Boston in the late 1990s, I saw Saving Private Ryan there. It was still a very nice theater at the time.

I remember Ugolini. must’ve been 70. Remember Joe Sasso too. he was a younger guy. Bill Glazer was a district boss and he hired this tool . last name Kelly as manager. His Fiance was sleeping with half the Staff. this was back in 74.

I have a few memories of the multiplex. Worst film I saw in cinema 1 Godfather 3. Cinema 2 saw the The Right Stuff and Titanic. either cinema 3 or 4 saw Edward Scissorhands (one or the other had a 70 mm projector. When it was a Sack Cinema 1st movie I saw was Semi-Tough (won passes to film) Did cinema 1 have a curtain?

I remember Joe Sasso. I worked at the Sack Cheri when it opened in the 1960s. I was a ticket taker and I worked concessions. It had a make your own ice cream sunday that was very popular. You got to pick your ice cream and toppings and sat down in a reserved decorated. Does anyone remember that?

I worked there in 1975 when I was in high school at Copley Square High. The first week we showed One Flew Over the Cuckoo’s Nest, The Man Who Would Be King, Emanuelle, and Lisztomania. I was in heaven. Sometimes I got to usher, though not for Emanuelle. I must have seen Cuckoo’s Nest a dozen times, but most of the time I worked the concession stand with two very smart and beautiful girls who had fled Ethiopia, who showed me how to count the candy and count it again, how to douse the popcorn with the soy “butter” substitute, how to alter the red/blue polyester uniform so that it looked a little less awful. I was sometimes sent up to work the ticket booth, which was outside on the Dalton Street sidewalk. When I was in the booth outside, my friends would stop by and smoke and keep me company for a minute. We got to see everything. We got passes to the other Sack cinemas if we asked. The screens weren’t that big, but they had great definition and vibrant color. The sound system was better than anywhere I’d ever been. I would see anything. On weekends there was a rent-a-cop named Jerry, with a gun and a german shepherd dog in his car. Sometimes he gave me a ride home even though he lived in like, Danvers, or something. The manager who hired me was a handsome, kind, and funny man named Steve Baruch. He somehow managed to make the mock tuxedo and black bowtie look elegant. He smoked like a move star. He loved old movies. I think he preferred them to the ones we showed. He had a whole other life outside the theater that I was very curious about but he never told. The boss was a florid man named Mr. Feeney, who carried a gun, and whose OCD compelled him to wash his hands obsessively until he scrubbed them raw. He spent most of his time in the little office, screaming on the phone, and I tried to stay out of his way. He screamed at Steve Baruch for letting me usher at Emanuelle because I was underage. There was another manager on weekends, Gene Hirai, who was the first person I’d ever met from Hawaii. He was always amused by me and my friends and our shenanigans. He was the first person I ever knew who talked about being “healthy” to me, as much as I smoked and drank and stayed up all night in high school. He told me candy was not dinner. HE said it was ok to have a book under the counter. There were a couple of outrageous boys who worked the candy stand when I first got there but they got fired for stealing. They were brilliantly funny, but I was a bit wary of them. One of them worked at the New England Home for Little Wanderers on weekends. I loved the name. Walking from Dalton Street down to Boylston at night to get on the Green Line at Copley was sometimes an adventure, sometimes an obstacle course, but since I went to school at Copley, I felt like I was in my own neighborhood, and pretty oblivious to danger. We were underage but could sometimes get into Paul’s Mall or the Jazz Workshop after we got off work. There was a bar next door to the theater. I don’t remember the name. More like a saloon. I ALWAYS changed out of that red/blue polyester dress with the zipper. I had an old mink coat that my aunt had given me. I never got any homework done at work. I couldn’t resist slipping in to the theater to see whatever. anything. After I went off to college in new york, I came back for a visit and Steve Baruch was still there. He told me I just HAD to see this new movie, Star Wars, and gave me and my friends complimentary tickets. We also saw Looking for Mr. Goodbar which had just come out, and might have freaked me out had I been into going to discos.

A nice enough theater but a weird setup when it was not busy. You had to buy tickets downstairs in the main lobby for Cinema 3 then go back upstairs and down a fairly long corridor to get to #3. Saw Stallone’s Paradise Alley there and the theater was flooded with big puddles caused by heavy rains flowing down from the above garage.

The Cheri’s 70mm engagements are noted in this new article on Boston’s large format and roadshow history.

Here’s a new 4-page 50th anniversary FIDDLER ON THE ROOF retrospective featuring a roadshow playdate chronology and historian Q&A. The Cheri’s dual-theater run is mentioned in the piece.