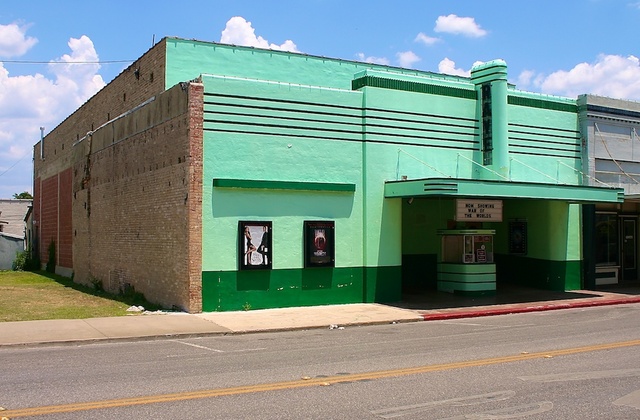 This is a cool little theater in Streamline Moderne style was opened June 29, 1938. It was being fixed up as of July 2004. It was the Raye Theatre originally. The awning is still up, as is a small glass block tower, but there is no neon visible. The outdoor ticket booth is very cool. The theater was painted in a nasty beige, but has been repainted in a mint green with dark green trim. No idea if this is original.

I guess we can change the status now. Funny that it doesn’t seem to have any neon. I can’t see any evidence of old installations in my pictures. Too bad the article doesn’t give more history.

My uncle Ray Jennings owned this theater. I came woth my parents many times down from Waco to visit my uncle Ray and my aunt Maggie Jenings.

What a thrill for a young movie-loving boy to be able to be waved by the ticket booth, get popcorn and soda without having to pay, and see the movie!

But even better than this was being able to go behind the screen, through a hidden door, and into my uncle Ray’s office.

His passion and avocation was going to Africa on hunting safari, and his office was filled with things from them – elephant and rhino heads, crossed tusks, big-game rifles, native spears and headdresses, a elephant’s-foot stool…

I know now what neither he or I knew then – that these were due to become endangered species – but that does nothing to allay the pure wonder of a place as far from my suburban upbringings as you could ever imagine.

Thanks for letting me post my memories of this small-town movie theater here.

I drove by there on Sunday, July 10th, and it appeared to be open, just not then I got a few pictures of it, can post them if wanted. It is called Raye of course. They were showing War Of The Worlds when I went by.

I grew up in Hondo and remember the Raye Theater. My dad was the projectionist for several years. I agree with Tommy Stewart that it was a real treat to walk past the ticket booth for a free movie. Since my dad ran the projector we got to sit up in the balcony area. This was roped off for some reason. Perhaps because of low attendance or maybe for safety reasons.
I think there was some neon out front but I would have to ask dad. As I think about it, I am almost sure I can hear the hum of it. Here is a little know story. From the projection room you could get out onto the roof that covered the front of the theater. The “awning” you might call it. This area had a high wall around it. During the movie, this is where I would go to relieve myself instead of going downstairs to the bathroom. It was from this area that I remember the humming sound of the lights.
My dad collected all the paper flyers that advertised the coming attractions. It has been more than 25 years since dad worked there but I’ll bet he still has those things. Thanks for stirring up some fond memories.
zm

We have only lived in Hondo for eight years, so the Raye Theatre has been renovated and reopened since we moved here. I think the Raye Theatre is the absolute best thing about Hondo, TX! I couldn’t wait for them to reopen and I know I was surprised that they always show a first run movie. Being an hour away from San Antonio (we actually live 15 miles past Hondo), it’s nice to be able to go to a movie without having the long drive home. My husband and I go to this theatre often. It is a family run business..often the grandpa and grandchild in the ticket booth and the rest of the family working the concession booth. The prices are so reasonable, especially for this day and time, for tickets and for the food..that it makes it that much more enjoyable. The interior is beautiful..great sound system..a real Hondo treasure! It’s never crowded except for the kid movies so I really hope they are able to make it and stay open!