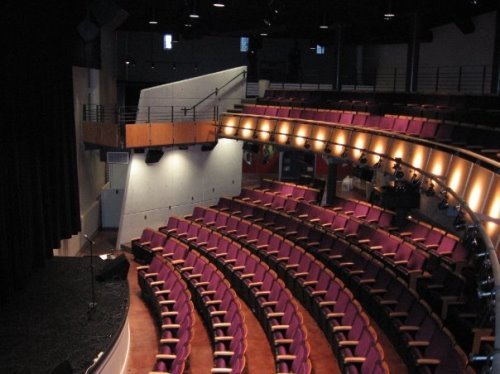 Built in 1914, the Strand Theater began its life as a grocery store. After a few years, it was converted into a single screen movie house and ran silent films with live piano accompanyment. The theater continued operation until the early-1980’s, when the owner’s widow decided she couldn’t keep up with it anymore. The Strand Theater has stood vacant ever since.

While there have been a variety of projects planned for the structure over the years, from converting it to office space to leasing it to the FBI, none have come to fruition.

It was originally hoped that by August 2002, renovations would be complete and the Strand Theater would be ready to present its first live production, but renovations are still not complete. In addition, there is a time capsule buried in the foundation, which will be recovered once renovations begin.

By 2007, the Strand Theater was open, and screening classic movies at weekends. The Initiative is still trying to raise funds.

Some clarifications on the comments above. The Strand was not open in 2007. The movies that were being shown were projected outdoors onto the BACK of the theater from its rear lawn. We called it the Summer Classic Film Series, and we ran that program on weekends in July and August almost every year from 2002 to 2007. The series was suspended in 2004 because of the restoration work that was being done on the facade. We had to drop it again in 2008 when the renovation began in earnest due to a lot of heavy equipment and materials being stored on that part of the property.

It turns out the time capsule was NOT buried in the foundation, but was placed in a cornerstone of the building. Therefore, we have no plans to recover it at this time. But if we can figure out a way to do it safely, it might be something we’d consider for The Strand’s centennial celebration in 2014.

On your website slideshow there is a photo of vintage projectors. Do you still have them? If so, it would a great idea to restore at least one of them for display purposes. And have you researched the theatre to know who the architect was in 1914?

The marquee has been completedly restored since the above 1981 photo. I do hope the original doors and ticket kios are part of the finished renovation.

Love them original doors though I’m afraid they might not have been saved.

I just viewed the 2008 photo and there certainly there,but I was in Z in late March and there was a different front on the building while work was being done…perhaps they will be replaced when work is completed. I will email a person involved with that theatre project to get the final decision on the doors. If they don’t use them, that would be a shame. If not, I hope they at least keep them in storage.

Lost: I wish I had paid more attention when I went through the plywood temporary entrance as they might have been there, but I really doubt it. I was to meet someone at the theatre, but couldn’t coordinate our schedules in late March. However, I do plan to attend one of the functions to celebrate the opening of the restored theatre.

I’m hoping to attend an event for this theatre’s grand opening next week. If so, I’ll report back here.

I had the pleasure of attending the Strand theatre in October of this year. The beautiful neon and milk glassed marquee was fully illuminated and most impressive. The theatre is mostly a concert venue but does also show classic movies Its digital capabilities, however, would permit new releases to be shown. The freestanding ticket booth still remains but appears to remain unused. Tickets are sold and picked up at the store front box office next to the theatre. Little remains of the original auditorium features, but all the alterations were tastefully done. The newly fully suspended horseshoe balcony added seating capacity to the seating loss created by the main floor seating reconfiguration. Seating is now the former width of the theatre instead of the length. Since the height of the theatre wouldn’t allow for the screen to be flown, it was necessary to enlarge the stage for concerts. The new seating configuration results in not a bad inhouse seat. Refreshments are very reasonably priced. Great place to see a classic movie of hear a concert,