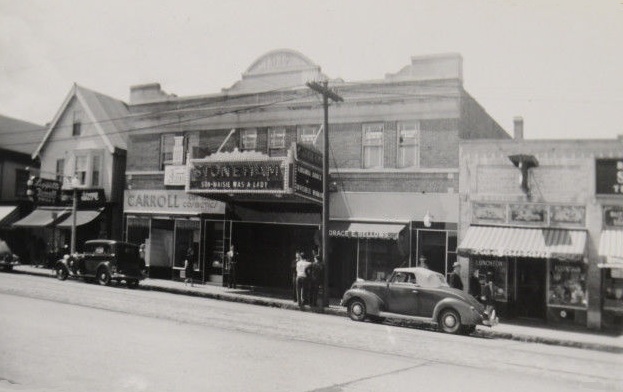 Stoneham Theatre was originally built in 1917 as a venue for silent movies and vaudeville acts, and it became a popular entertainment spot for over 50 years.

In the early 1970s, as movie theater chains began to flood the market, Stoneham’s beloved independent moviehouse was closed. It remained vacant for nearly three decades until an ambitious two-year restoration transformed the theatre into a 350-seat, state-of-the-art performance venue. On December 1, 2000, it celebrated a Grand Re-Opening.

Great stuff from Father Nature and everybody! Here are some of my memories of the Stoneham Theater from the 1960’s:

The owner, Mr. Zaltman, was indeed a curmudgeon upon whom was bestowed the universally known moniker, “Oscar.” Naturally the theater was dubbed “Oscar’s Palace” and his wife, another grumpleton who ran the candy stand, was “OscarLady.”

During the movie Oscar would ceaselessly patrol up and down the aisles seeking out miscreants while clutching a flashlight in one hand and chomping on his ever-present cigar. It became a badge of honor to have him evict you from the premises, marching your proudly defiant butt up the aisle to the cheers of the assembled multitude.

Once local tv kid-show host, Major Mud (remember IBBY?) made a personal appearance there. My friend and I decided to intercept him to try and steal some private time with the Major. We stationed ourselves on our bikes in front of the narrow alley that runs from the front of the theater on Main St. to the backstage entrance. Sure enough, after awhile we see a guy coming up Main Street from the direction of the Gloucester Fish Market. He’s wearing a trenchcoat and a hat but below the coat his trademark green spacesuit with piping on the sides was a clear giveaway. As he approaches he becomes noticeably chagrined, realizing that these little snipes on sting rays are blocking his designated route to the theater. He mutters an obligatory greeting but clearly is not sharing our enthusiasm over the encounter. Meanwhile, down the alley, Oscar has appeared and is waving frantically for the Major to make his way to the back door — but we’re not moving. Finally, the Major, realizing the hopelessness of his situation, pleads to us: “Guys, can you give me a break? I’m just trying to make a living.” The day won, we let him pass.

Thanks for the Redstone Pic Father Nature. Not at all as I remembered it.
The last movie I saw in the Redstone Theater was Men at Work. According to a friend, the last movie he saw there was Ghost. These were both 1990 movies and it took quite a while for movies to come to Redstone, so Iâ€™m quite sure the theater was open until then.
If memory serves, the theater sat in the back of the strip plaza on the Caldor/Woolworth side surrounded by parking lots. Behind it was a hill covered in overgrowth that rose up to the residential neighborhood where I grew up. We used to cut through some neighborsâ€™ yards to the top of this hill, and down a path to the parking lot where the theater was. I remember when they demoed the theater to make way for Shaws. When we pulled the brush aside at the top of the hill where we could stand and look down on Redstone, pile of red cushioned seats that had been ripped out of the theater seemed to be as high as the hill we were standing on. Again, the picture of Redstone seemed almost foreign to me, so who knows how big the pile really was.
â€œKick Buttowski â€" Suburban Daredevilâ€ a Disney Cartoon created by a Stoneham native will reference Redstone this upcoming season.
As for the theater in the square, I grew up in Stoneham in the 80s, and until the renovation I do not recall a time when that theater was ever open.

From 1936 an image of the Stoneham Theatre in Stoneham Square.

I have submitted a page for the Stoneham Cinema that was at Redstone Plaza; once it is active I will post a link here for people to follow.

Anything concerning the Stoneham Cinema that was in Redstone Plaza should now go on this page:
/theaters/34522/

Looking at the photos and the info on this page I am kicking myself now at 73 living in ABQ. never visited it, for I was once the young manager of the CINEMA at REDSTONE opened it and love that theater it was my first as a theater manger, retired now but will always love not just movie but all theaters thank you all of the STONEHAM area that help me with my career on the site CINEMA TREASURE for CINEMA REDSTONE you may see a photo of the first staff pray they all did well for the sure made my job easy much blessings DENNIS J. MAHANEY

My grandparents briefly owned this theater in the late 60s (68-69). They only owned it for a couple of years and actually may have bought it from the grouchy guy others have mentioned. I believe they were the last people to own it and run it as a movie theater before it was closed and was vacant for all those years. The Redstone Theater which was fairly new and more modern hurt their business so they decided to sell it. And maybe the Woburn Showcase had just opened as well (not sure). I remember as a little kid having my own seat up in the balcony and specifically watching The Jungle Book, and vaguely remember getting to go into the projection booth. I also remember my mother, who worked the candy counter, getting upset with me for giving away candy to kids at the matinee show when she wasn’t looking. Vague but good memories of that theater. Glad that it was eventually rehabbed and given new life.