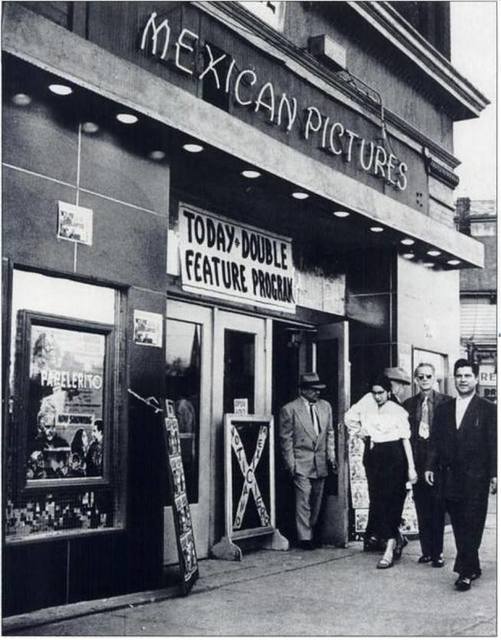 The Brooklyn Theatre was a small theatre located on the northwest corner of Brooklyn Street and Michigan Avenue, Detroit. It opened in 1913. From 1947 it was renamed Azteca Theatre and screen Spanish language movies. It was demolished in the 1950’s.

1951 photo added. “El Papelerito” on the poster was released October 25, 1951. So the 1939 close date is incorrect. Below copy accompanied the photo. The Brooklyn Theatre, later renamed the Azteca Theatre, once stood on the northwest corner of Brooklyn Street and Michigan Avenue. It specialized in Spanish language films after Corktown gained an influx of Mexican immigrants. It was demolished around the 1950s.

This photo appears in “Detroit’s Corktown” by Armando Delicato and Julie Demery, and was originally from the Burton Historical Collection, Detroit Public Library. Via the Corktown Historical Society.

My grandpa is the guy with the sunglasses on