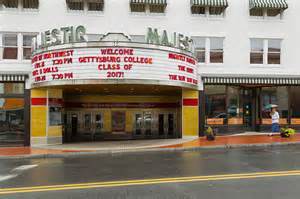 The Majestic Theater opened on November 14, 1925 with the Cecil B. DeMille movie “The Road to Yesterday”. With 1,200 seats, including a balcony, the Majestic Theater opened as the largest vaudeville and silent movie theater in south-central Pennsylvania. Designed by the prominent Philadelphia architect William H. Lee, the Majestic Theater was built by Henry Scharf, manager of the historic Hotel Gettysburg, as an annex to the hotel. Since early-1990, Gettysburg College has owned the theater. By 1941 it was operated by Warner Bros. Circuit Management Corp.

In the 1950’s, the Majestic Theater stepped onto the world stage when President Dwight D. Eisenhower and First Lady Mamie Eisenhower regularly attended performances, often in the company of world leaders. The theater’s ballroom/gymnasium (now renovated to function as two cinemas) was often used by the White House press corps for news conferences when President Eisenhower was in residence at his Gettysburg farm.

A $16 million eighteen month restoration of the Majestic Theater concluded with a grand reopening November 14, 2005, the 80th anniversary of its first opening night. In honor of the largest personal financial gift to the restoration of the Majestic Theater, the name ‘The Jennifer and David LeVan Performing Arts Center’ has been added to the marquee. The family donated over one million dollars, helping to obtain the needed $8.5 million in grants from the state to complete the project. John Milner Architects were employed for the restoration, with the architectural firm Killis Almond Associates.

The lobby has been redesigned and expanded to take up the space of the four store fronts which used to be there. Three of the interiors are now part of the lobby and the fourth is a restaurant.

Meticulously re-created in the historic auditorium, are its original Colonial Revival style features including the decorative pressed metal ceiling, stained glass chandeliers, the proscenium arch framed by massive Doric columns and pilasters, elaborate stage draperies, plush seats with hand painted cast iron standards, and custom-woven wool carpets. The pressed tin gold and polychrome ceiling was refinished. The central chandelier is a replica as the original one was destroyed in the 1970’s when the auditorium was triplexed. The wall sconces are replicas of originals. The color scheme was also restored, to Gingersnap Brown, Terrain Tan, Oak-Buff Yellow, Carlsbad Canyon Orange, Iron Gate Gray, Eucalyptus Leaf Blue Green, and glazes of Gold and Bronze. The auditorium now sits 622 in the orchestra level and 194 in the balcony.

The Majestic Theater is on the National Register of Historic Places.

I Thought this might be the MAJESTIC THEATRE in the Late 80’s short lived TV SERIES THE POPCORN KID. Yep, the entire show took place in the MAJESTIC theatre. The show was on CBS for about 6 episodes. So it goes.

Thanks for the photos and infor Mike and Lost Memory.

Here is a November 1939 ad from the Gettysburg Times:
http://tinyurl.com/yc7mxhs

Here is a night shot:
http://tinyurl.com/y9wx9co

Looks like the two screens which were created from the adjoining building in 2005 to show art films may be in trouble due to digital. Video limk:

The Majestic’s efforts to raise funds for the transition to digital projection are on target and, as of this writing, are close to not only reaching the goal but will likely exceed it. The plans are to replace the 35mm projectors in the two smaller auditoriums and also the current digital projector in the main auditorium which is used for the summer classic film series and an occasional film throughout the year.

Good news. The Majestic has exceeded it’s goal of $150K to replace it’s two 35mm projectors, guranteeing the tradition of nightly films will continue in downtown Gettysburg. As of this post, the total contributions have exceeded $163K.