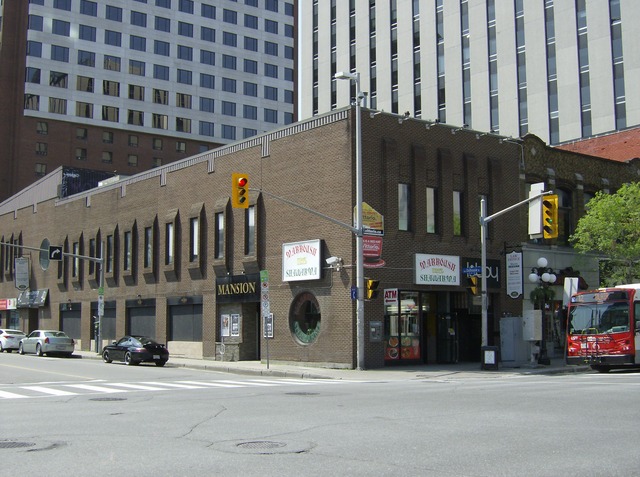 Opened as the Princess Theatre in 1915, this cinema served Ottawa’s main department store street and the densely populated Byward Market area as a neighbourhood operation before expanding dramatically by building a new auditorium at the rear of the Princess Theatre, which then became the lobby. It reopened on November 22, 1931 to become a true flagship theatre for the 20th Century Theatres chain, under the name Rideau Theatre. The reopening movie was Walter Huston in “The Star Witness”.

It was renovated several times, keeping its upstairs pool hall until the end (when it became a video arcade). The theatre played a variety of first-run fare. Its interior was one of Ottawa’s nicest.

The Rideau Theatre survived until 1982.

It was too big a theatre for it’s location. Land was too expensive and it wasn’t pulling in the crowds. In it’s later stages it was showing second runs of movies. In the end they closed the balconey.

I worked as a weekend/summer usher at the Rideau from 1961 to 1965 while attending Rideau (of course) High School and Carleton University. At that time, the theatre was an â€œaction house,â€ showing first-run double bills of westerns, comedies, war pictures, crime pictures, teen pictures and some horror and science fiction shows (although more of the last category ran at the Centre Theatre on Sparks Street, which played American-Internationalâ€™s product). The first James Bond movie, â€œDr. No,â€ played the Rideau first-run on a double bill because the distributor saw it as just another action film. After its surprise success, subsequent Bond films played as single bills at â€œAâ€ theatres, such as the Elgin. The first Beatles picture, â€œA Hard Dayâ€™s Night,â€ played first-run at the Rideau as a single bill, with advance sales of special, oversize souvenir tickets at the then-high price of $1. Fans lined up two days in advance. The Rideau also played many of director William Castleâ€™s gimmicky horror movies. In â€œThe House on Haunted Hill,â€ a glowing skeleton appeared to leave the screen and float over the audience, thanks to a pulley and wire that ran from the screen to the back of the balcony. For â€œThe Tingler,â€ random seats were wired with low-voltage electricity, shocking unsuspecting audience members into jumping and shrieking at appropriate moments. At the climax of â€œHomicidal,â€ audiences got a one-minute â€œfright breakâ€ warning and then the house lights were cut, plunging them into screaming darkness as the horror played on. Manager Doug Pinder was a real showman who sometimes dressed the entire street-face of the theatre with elaborate false fronts promoting the show inside. I remember when he agonized about raising the evening adult ticket price to 75 cents; he feared it would hurt business. The Rideau was a simple but handsome theatre, with a long, wide lobby that had once housed the entire Princess Theatre, a silent house that preceded the Rideau. Beyond the Rideauâ€™s lobby, a few steps led to the auditorium level, where further flights of stairs at the left and right led to a landing from which a final flight in the center led to the balcony and loges. I never counted the seats, but Canadian Film Weeklyâ€™s yearbooks are probably correct when they put the total at 817 (not the 1,081 cited at the top of this listing). You had to be at least 16 to go up to the balcony, where smoking was allowed. Ushers showed all customers to their seats, and patrolled the aisles quietly but constantly, shushing talkers, breaking up overly amorous couples, watching for molesters and ejecting the unruly. We were proud of our showplace and we had great camaraderie. Occasionally, we all left by a rear door at the end of the night because several ejected customers were waiting for us at the front. On holiday weekends, the Rideauâ€™s ushers would finish their 12-hour shifts at 11:30 p.m., then head for the Britannia Drive-In out on Richmond Road to supplement its staff for a midnight triple bill. At sun-up, the show would end and weâ€™d head for breakfast.

Being a child of the 1970s, I have such fond memories of the Rideau Theatre because I spent most of my summers there watching re-releases of old Disney movies !!! It was a GREAT and classy theatre, and they had the old lobby cards, great popcorn, warm staff and it was sad when the closed it in 1982 because of the new cinemas being built at the Rideau Centre.
Every time I pass by the building and look at it, I always think back at those days between 1975 and 1982! Good memories ! and they sure don’t make theaters like these anymore!

Contrary to what is indicated by Alain Miguelez, the Rideau Theatre was not torn down. It was simply closed. The building still stands on the Southwest corner of Rideau and Dalhousie. The building that was torn down to make way for the Dalhousie Street extension was the building that housed Pascal’s Hardware (previously Loblaws)

This opened on November 22nd, 1931. Grand opening ad in the photo section. 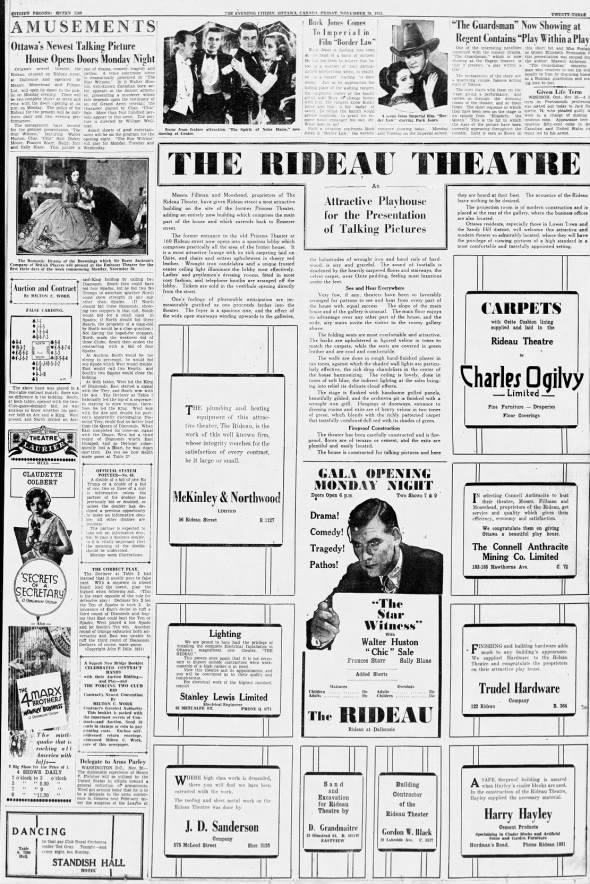 Cecil Burgess was the architect of the Rideau Theatre (Biographical Dictionary of Architects in Canada.) An entirely new auditorium was built behind the 1915 Princess Theatre, which was then converted into an entrance.

Burgess also designed major alterations to the Balderson Theatre at Perth, Ontario, in 1930, as well as designing a legitimate theater in Ottawa, the Little Theatre Playhouse, completed in 1928.