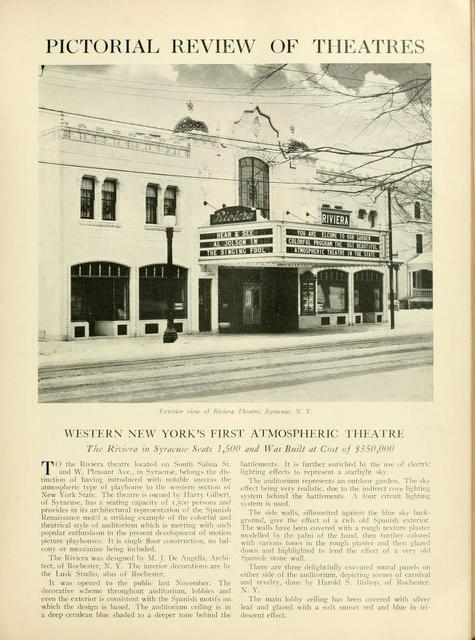 It was closed in 1968, when the roof caved in due to heavy snows. The building was demolished in 1975.

Would love to see photos of this theatre! If it was atmospheric, might the architect be John Eberson?

This 7/4/67 article from the Syracuse Post-Standard mentions the Riviera:

New “hardtop” motion picture theaters are rising even quicker than old ones are being torn down â€" but most of them are in the suburbs.
However, the trend will be reversed when the Kallets build the first Twin Theaters downtown opening in 1968, across from the War Memorial.
A third downtown theater is expected to be built by Slotnick Enterprises Inc. in the 400 block of S. Salina Street, as part of the Downtown One Urban Renewal Project.

The new Westhill Theater, at Velasko Road and Onondaga Street, will open in August as a third new suburban theater built by Slotnick Enterprises, Inc. This will have about 900 seats. In the 1965-66 season, the Slotnicks opened two theaters â€" Cinema North and Cinema
East. Last December, the Slotnicks acquired the Riviera Cinema, the art theater on S. Salina Street.

With the completion of the new Westhill Cinema, they will have “hardtop” theaters in all four sections of the city, in addition to the three drive-ins they operate â€" DeWitt, Lakeshore and North Drive-Ins.

The first new theater before that was the Kallet Shoppingtown Theater, which opened in 1957. The theater was especially built for the Todd-AO process and became the premiere showcase for long-run,
“hard-ticket” productions. This showcase, with its unusual multi-colored velvet curtain, was the first new theater since Loew’s State was built at the end of the twenties. This was another “first” for
Kallet Theaters. They had built the first drive-in â€" the Kallet Drive-In â€" which made way for Camillus Plaza.

Shoppingtown Theater had the longest run of any motion picture â€" 18 months for “The Sound of Music,” since unequalled. It has also played
“Around the World in 80 Days,” “Ben-Hur,” “South Pacific,” “The Bible” and “Cleopatra” and is showing “The Sand Pebbles”. Manager Sam Mitchell already has plans to bring back the granddaddy of long runs, “Gone With the Wind,” in Todd-AO process, wide-screen and stereophonic sound. The Kallets also operate the Genesee Theater on the West Side, where “Doctor Zhivago” played 36 weeks. “Thoroughly
Modern Millie” will open soon.

The new Twin Theaters are planned for art films, road shows and regular films and will be two separate theaters built side by side with a mutual lobby. These “theaters of the future” are planned to have many innovations. The two remaining theaters downtown are the elaborate Loew’s theater â€" largest of all with its 2,896 seats â€" and
the Eckel, a former Schine theater and home of Cinerama.

The score of major theaters is currently two downtown, five suburban; another suburban opening this summer; and three downtown theaters to open in the next year or two. The neighborhood theaters
of Syracuse now number fourâ€" The Wescot, the Franklin, the Hollywood and the Palace. Even these have gone first-run occasionally. The Palace in Eastwood, in a neighborhood downtown section, has since the closing of the Paramount and RKO Keith’s theaters been obtaining
first-run films.

The Wescot, in the University section, has also booked first-run art and foreign films, striking a bonanza with “A Man and a Woman” which is in its 40th week.

The Eckel is long gone and I don’t think that Twin Screen theatre next to the War Memorial ever opened. At least it wasn’t there as of 1983. The drive-ins are also long gone I believe.

Like in so many other cities, this neighborhood where the Riviera was located became primarily African-American as the white people ran away to the suburbs. Unfortunately, this meant the area became poverty stricken and the theatre couldn’t make a go of it.

As a small Child I lived 3308 S. Salina st. only 1 ½ blocks from the Riviera Theater from 1963 to 1970. I remember my older siblings being allowed to walk to the Riviera theater to see the Movie “The Planet of the Apes” I was to young and Not allowed. A year or so later I was allowed to walk with a friend to the Riviera Theater and Saw the Movie by Walt Disneys “Fantasia” I remember being embarressed that the program started out with Orcistration Music. Not very appeiling to a Child. Thus began My infatuation with Dinosours and Classical Music. Thank You Riviera" Mr.Clifford M Brown.

You should rent “Fantasia”, if you haven’t already. Plenty of dinosaurs and classical music.

Here is a 1948 ad from the Syracuse Post-Standard:
http://tinyurl.com/yukme7

I’ll never forget the cool decor of that theater. My parents took us there to see a few movies back in the late 1940’s-early 1950’s. There really was nothing elsae like it.

Appears to have opened in November 1928.

I was a young part-time Usher for the Riviera during the final two years I lived in Syracuse, ‘66-'67. I worked the night shift and usually the Saturday matinee. There were very few people involved with the running of the Riviera while I was there ~ the cashier lady, the concession stand lady, the male Manager (who took and tore your tickets and made any necessary command decisions), two alternating projectionists, the maintenance man, and me. I was the dashing young man in the sports coat, white shirt and tie who greeted you and escorted you to your seats with my flashlight if you came in after the lights went down. I also threw you out if you caused a disturbance, and used the assistance of the manager and maintenance man if I couldn’t do it myself.

During the years I was there, Riviera had decided to host a ‘foreign’ film venue. The films you couldn’t see anyplace else were exclusively shown there. Some truly great overseas films were presented, requiring English sub-titles. Altho I got to watch each movie three times, I was usually too busy working to read what was being said. Jean-Paul Belmondo was in just about every French movie of those days and I got pretty sick of him, frankly. I welcomed the excellent British and Canadian movies, which were ‘somewhat’ more easily understood. The Riviera actually made a solid contribution to my life because I usually got to read the entire credits for each foreign movie, including the OUTSTANDING musical score information. Being a typical middle-class ‘60s NY teenager, I sorely lacked any real “culture” or education about foreign arts. I can honestly say these films introduced me to classical music and initiated my life-long appreciation of it.

The theater itself was not huge ~ three groups of 300 seats each, divided by two wide aisles, with smaller aisles down either side of the auditorium. If we had a balcony, it wasn’t used. The sets were deep and plush ~ a pleasure to sit in, and they sort of ‘rocked’ a little. Our air-conditioner could freeze you on the muggiest Syracuse summer night; it made the job rewarding. The ceiling and walls were well decorated. Tiny ‘star’ lights on a dimmer (controlled by the projection booth) speckled the ceiling. Both walls had floor-to-ceiling overlapping panels of sound-deadening drapes, speakers and mood lights. Acoustics were excellent for the auditorium. A long wall, 7feet high, separated the seating area from the lobby. Open doors to each of the 4 aisles were covered in heavy red velour curtains, and one of my many jobs was to tie open each curtain at the end of each flick.

My young age prohibited me from working while certain movies were being shown, until I became 18. I was paid ‘well’ : $1.75/hr and all the popcorn I could eat. After midnight I got $2.25.

I was given careful instructions before I could work there. The management was very intent on making sure their patrons had a good time, remained undisturbed, and came back for more. I was taught how to deal with myriad situations, including how to pick something up from the floor when standing near other people. “Bend your knees and keep your back straight! Never bend over ~ you’ll meet someone else bending down for the same object and crash skulls, and we’ll be sued!” (That was 45 yrs ago and I taught all my kids the same thing).

After each movie, I had to walk each row of seats to collect any personal items left behind (marking the seat number to confirm we returned them to the actual owner) and help the whole crew sweep up the empty popcorn boxes, etc. They were really intent on keeping the place in good order and clean. We got about 10 minutes down-time before we opened the doors and let the folks in for the next performance. We did three presentations each night, probably entertaining no more than 500-600 people total.

I lived less than 2 miles away, but couldn’t drive after dark on my “Junior license”. I had to report for duty looking clean and sharp, so if it was raining I had a problem. I could drive my car TO the Riviera and report on time, looking good, but until I turned 18 I had to leave my car parked there overnight and walk home, regardless of the weather. The thought never crossed my mind to actually ‘cheat’ and drive home illegally. (Hey, it was another era).

I joined the Marines right after high school (Vietnam was calling me) and never returned to Syracuse. I understand the roof collapsed the year I left? A pity. I had absolutely nothing to do with that and can account for my whereabouts when it happened, I’m sure. I liked that old theater. I was young, impressionable and surrounded by French sex flicks and couples making out in the dark at each performance. Both the ticket lady and the concession stand lady flirted with me, but my boss (the manager) was related to one of them and married to the other and I didn’t know which was which. In an uncommonly mature and responsible display of integrity and self-restraint, I somehow managed to keep my hands off both of them for nearly two years and left with a good recommendation.