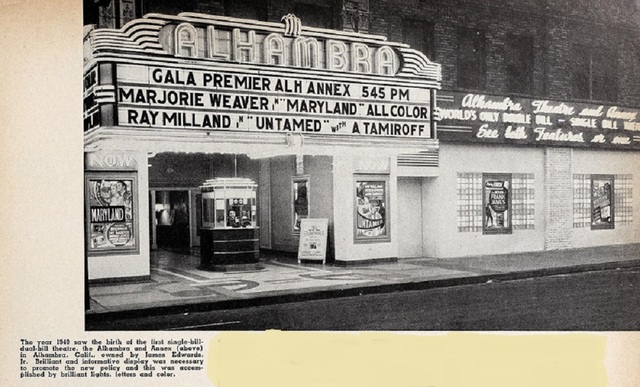 The Alhambra Theatre was opened in December of 1924, and was then the largest theater yet built in the growing, suburban community of Alhambra, eight miles east of downtown Los Angeles. The architect was George Weir. The announcement of the opening in the Los Angles Times called the Alhambra Theatre a playhouse, and plays were presented on its stage during its early years, alternating with vaudeville shows and movies. Operated first as an independent theater, it became part of the young Edwards Theatre Circuit in the early 1930’s, after which time the Alhambra Theatre operated exclusively as a movie house.

The theater building, located at the southeast corner of Atlantic Boulevard (originally called Wilson Avenue) and Main Street, included a row of shops with apartments upstairs, fronting on Main Street, with the theater entrance at the east end, farthest from the intersection. The four-aisle auditorium was behind this commercial building, its axis parallel to Main Street, and the back of the large, red brick stage house was adjacent to Atlantic Boulevard. The street fronts of the building were faced with a rusticated tapestry brick, laid in a casual pattern, and there was a bit of classical detailing in white stone (or perhaps terra cotta.) In later years, the entire front of the building was painted white, causing the detailing to be nearly invisible. Above the theater’s entrance was a large, arched window surmounted by a flat pediment, which was partly removed in the late 1950’s, to comply with a municipal regulation intended to protect passersby from possible earthquake hazards.

An unusual feature of the Alhambra Theatre was a false wall of glazed windows separating the auditorium from an inner lobby. The lobby was in three parts; The outer lobby with its box office; The main lobby where the concession stand was built in later years; And, separated from this by a broad curtain which was drawn open during intermissions, a dimly lit area which occupied the back of the auditorium itself, and was seperated from it only by this false wall. The high ceiling of the auditorium reached unbroken from the proscenium, back to the east end of the building. Against the east wall was a two story structure with restrooms on the ground floor and projection booth above. This structure was to the left as patrons entered the inner lobby from the main lobby. To the right was the long false wall, about nine feet high, and its row of windows overlooking the auditorium, and the draped entrances to the four aisles. The auditorium featured several rows of tall-backed leather upholstered loges, and a large number of ordinary orchestra seats. The total seating capacity of this room was probably more than 1,000.

But the most unusual feature of the Alhambra Theatre was a second auditorium, constructed (in 1940 and opening on November 5, 1941) in some of the commercial space adjacent to Main Street, and which was entered from a side passage opened in the side of the main lobby, opposite the concession stand. This second auditorium was called the Annex, and sometimes called the Single Bill Theatre. Double features had become the norm during the depression years, but some people still preferred single features, and The Alhambra accommodated both groups by showing double features in its main auditorium and a single feature in the Annex. (The Annex even had its own, small separate marquee, flat against the wall just west of the main theater marquee.) Declining patronage at movie houses in the 1950’s led to the end of this policy early in that decade, and the Annex was left unused for several years. Still, the theater continued to be listed in the newspapers as the Alhambra & Annex well into the 1960’s, and listings in the Alhambra Post-Advocate newspaper of that period continued to carry the tag line “World’s only double bill-single bill theatre”.

In the later 1960’s, with the growing popularity of multiplex theaters, the Annex was refurbished and re-opened as the Gold Cinema. Although the theaters shared the same box office and lobby and restrooms, as with any twin cinema, they continued for several years to be listed seperately in newspaper theater listings. Finally, in the 1970’s, the theater was renamed the Alhambra Twin Cinemas, and thereafter their newspaper listings were combined.

The Alhambra Twin continued to be a popular theatre even after the Edwards Circuit built a new five-screen theatre called the Alhambra Place a few blocks away, in the early 1980s. However, the long career of the Alhambra came to an abrupt end when the Whittier Narrows earthquake of 1987 caused most of the main auditorium and its stage house to collapse into rubble. Fortunately, the earthquake occurred at an hour when the theatre was closed. A few hours earlier, and the Alhambra might have become the site of one of the worst theater disasters in American history.

The remainder of the building was soon razed, and a ten-screen Edwards multiplex called the Atlantic Palace was constructed on the same site. It continues in operation today.

James Edwards' intention to add a second auditorium to the Alhambra Theatre was announced in Boxoffice, issue of July 23, 1938 (upper right corner.) However, the project was not completed until August, 1940.

Helen Kent’s illustrated article about the Alhambra and Annex appeared in Boxoffice of October 12, 1940.

great theatre i saw space balls and a lot of great movies.

The Edwards Atlantic Palace, which stands on the site of the old Alhambra Theatre, is scheduled to be demolished on July 1, 2011: View link

The Alhambra Palace 10, or whatever it was called, has ceased operating and is now closed. The theater is now dark and only a poignant “Thank You Alhambra” is all that remains on the marquee. All that remains is to remove the seats and fixtures, gut the place, and then demolish it. Coming soon: a Los Angeles County administration building on this site. Yet another theater on Main Street in Alhambra – gone – where once there were many. Joining The El Rey, the Capri and the Century and Temple farther east on Las Tunas, now the only theater that survives on Main Street is the Edwards Alhambra Renaissance 14 on the corner of Garfield and Main Street. Saw lots of great movies over the last 45 years at both the Alhambra Palace and also at the old Alhambra and Gold Cinemas before the Palace replaced it when it was destroyed in the Whittier Earthquake in 1987. This theater was a large part of my youth and it will be missed.

Here is a photo of Jimmy Edwards standing in front of the Alhambra Theatre in the 1930s. The circa 1939 date given on that page is wrong. As I recall from earlier research, Edwards bought the lease on the Alhambra not long after he acquired the Mission (later Monterey) Theatre in Monterey Park, and that was in 1930. By 1939, Edwards was operating a circuit of more than a dozen neighborhood theaters, and the Alhambra was his flagship house. If this photo depicts the theater just after Edwards acquired it, it probably dates from the very early 1930s.

The July 23, 1938, Boxoffice Magazine item about Edwards' plans to add a second auditorium to the Alhambra Theater, mentioned in my earlier comment, has been moved to this link.

The article by Helen Kent about the opening of the Alhambra’s second auditorium, in the October 12, 1940, issue of Boxoffice, now begins at this link, and continues on the subsequent two pages of the magazine (click “next page” links at top or bottom of the page scans.) This article has several photos of the theater as it appeared in 1940.

Jimmy Edwards' desire to build a theater in San Marino was the subject of an item in the February 12, 1937, issue of Southwest Builder & Contractor. Plans for a 750-seat reinforced concrete movie house with dimensions of 55x130 feet were being prepared by architect John Walker Smart.

Three years after being rebuffed by San Marino, Edwards was planning to build a theater on Huntington Drive in adjacent South Pasadena. A February 9, 1940, Southwest Builder item said that S. Charles Lee would be the architect for the South Pasadena house. This project was never carried out either, though I have no idea why.

I’ve come across several references to proposed Edwards theaters that never got built. Among them were two proposals for theaters on Garvey Avenue in Monterey Park— a 1,000-seat house in 1939 and a 1,200 seat house in 1945— that failed to materialize.

Incidentally, John Walker Smart was the architect of Sylvester Dupuy’s Pyrenees Castle, the hilltop mansion in Alhambra which became infamous a few years ago as the site of record producer Phil Spector’s murder of Lana Clarkson.

Smart was also the architect of an unbuilt Moorish-style theater proposed for Alhambra in late 1923. It’s possible that it was intended for the site of the Alhambra Theatre itself. Even if Smart’s project was intended for some other site, if it had been built the Alhambra, dating to late 1924, might not have been.

The Alhambra Theater was the location of the murder of an Alhambra Police Officer who interrupted a robbery. I believe there wass a plaque at the newer theater.
http://www.odmp.org/officer/9906-police-officer-james-h-nerison