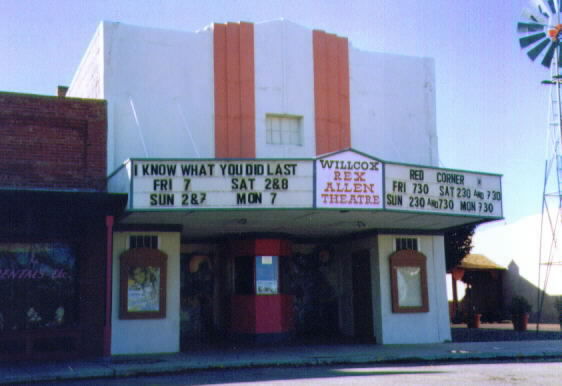 The Willcox Theater was built in 1936, opening in January 1937 with Joan Crawford in “The Gorgeous Hussy”. Stating was provided in orchestra and balcony levels. Later known as the Rex Allen Theater, it was twinned in 1990. It closed in 2011 for renovations and reopened in 2012 as the Willcox Historic Theater. It is owned by the Rex Allen Museum, and is a community supported 501c3 charity.

Named for the Western movie star who was born in this southeastern Arizona town, the classic art deco building was constructed in the late 1800s. Originally called the Mystic, it has been a theater since 1927 and at one time hosted live stage productions.

When movies took over, the theater had a single screen and a balcony, but in recent years has been converted into a twin screen theater. In the smaller theater, the images theatergoers see on the screen are produced by a Motiograph 35 mm projector, made about 1935. It is the oldest operating movie projector in the state of Arizona. The building is listed on the National Registry of Historic Places.

Take the time to visit the Rex Allen Museum next door. Early photos, elaborate costumes and posters from some of the 19 movies Allen made for Republic Pictures between 1950 and 1954 trace his career.

This theater closed down in October 2011. Plans are in the works to open again but as of this date theater is not operating.

A reopening is likely to happen soon; the Wilcox Historic Preservation Society, Inc. has struck a deal to acquire the theater from and resolved issues involving access with the Rex Allen Museum Board. {View article](http://www.willcoxrangenews.com/news/article_59238156-17e2-11e2-87b4-001a4bcf887a.html)