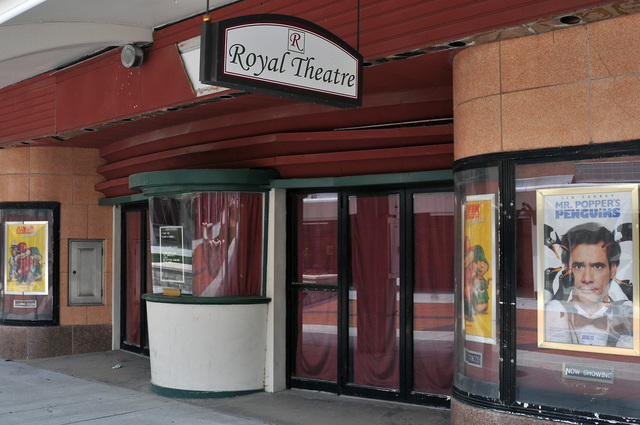 The Royal Theatre was built on the site of the Fox Royal Theatre which was demolished in 1947 (it has its own page on Cinema Treasures). The new Fox Royal Theatre was opened by Fox Midwest Theatres on January 27, 1949 with the world premiere of “The Sun Looks Up”. It was later twinned. At one point in its life, the theatre operated as a Saturday night country music opry but with only mild success. The music was said to be great but the audience was often too small to pay for the show’s cast. The owners kept the show going at their own expense. The theatre showed first and second run features.

The exterior is somewhat simple but elegant in brick and white stucco with subtle ornamentation and a few finials and arc’s at the top of the facade. The building seems representative of Spanish or Moorish architecture. There is a very simple awning style marquee a large decorative “R” tile on the stucco above the marquee. It was closed in 2014. It was converted into 3-screens and reopened as the Fox Theatre on March 29, 2019.

Universal Pictures bought the Royal around 1925. From further research this was also known as the Fox Theatre or The Fox Royal Theatre. The original building was razed in 1947. A year and a half later the new Fox Royal opened on January 27, 1949. The newspaper headline read “Atchison is calling attention to the opening of it’s new theater, the Fox. The old town is getting foxy in many ways.” The opening included the world premier of the movie “The Sun Looks Up,” live stars appeared on stage. This was and still is, the only movie that ever premiered in Atchison.

Fox Midwest owned the Fox, as well as the Orpheum. The new Fox Theatre was absolutely the last word in theatre design. Steel, concrete and brick with terra cotta made the building virtually fireproof.

One of the most beautiful interior appointments was the gigantic cloverleaf above the seats at the rear which hid the lights. In the beautiful foyer were terraced floors that featured a modern concession stand dispensing Coke, ice cream bars, popcorn or candy.

On opening night, before each feature, was a stage show featuring Brenda Joyce, Hollywood star, ‘Ginger Denning of radio’s famed Denning Sisters and Leighton Nobel and his nationally popular 15-piece band. Atchison’s own Jack Moorhead was master of ceremonies. A Junior at KU, he worked to promote the Red Cross and War Bonds.

Tickets for the opening cost $1.50. Prices reverted to 60 cents for adults and 14 cents for kids the 2nd day.

The Royal is in sad shape and further ruined by the city making a mall out of downtown. A two block stretch, including the Royal, has a cement canopy over the sidewalk and required removal of the Royal’s marquee. The street has been replaced with trees and grass. I know of other cities that have tried this and it does not do a thing to attract people. It is summer right now in Atchison and there is virtually nobody on the 2 block stretch of mall. The stores on both sides of the street have rear entrances that are used more than the mall entrances. The Royal busted through the rear wall and is using an entrance there. [url=http://www.itemspecialty.com/movie/royal_theater.jpg]

The entrance is now at the back of the theater because the city screwed up the downtown streets and everyone uses what was the alley to access stores. So now when you walk into the twined main floor, you walk in under the (small) screen so the screen is way up in the air. The few times I have gone to torture a viewing I sit in the last row and I still have to look up. I can not image sitting up close, you would get a stiff neck. Sound is not very good and the wall between the two screens is thin so you hear what is going on in the other screen. Might look nice in a picture but it is not a good movie experience. The old balcony has a huge wall to wall screen the width of the original building. But since there are stairs, it is not handicapped accessible and no longer used.

No showtimes or listings for this theatre, closed?

This theatre does very little marketing. It could sell more tickets if it posts showtimes online.

Theater has been closed about 1 ½ years when film prints were no longer available. It’s for sale http://www.ucgatewayauctions.com/property.aspx?item=62536&agency=15023&re=1#.VhhluyvVbIU