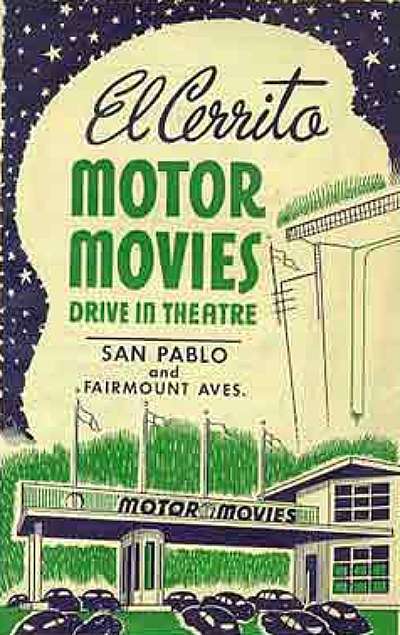 The El Cerrito Motor Movies was opened by Blumenfeld Theatres on October 11, 1948 with “Green Grass of Wyoming” and “Lightning in the Forest”. It was closed in the mid-1950’s.

There is an old advertisement for this drive-in located on http://www.americandrivein.com/states/ca.htm

This was the first drive-in in the San Francisco Bay Area, opened in 1940. It was gone by the early 1960’s, the El Cerrito Plaza shopping center sits where this drive-in once was.

It was a single-screener as well.

My father took our family almost every week to this drive-in theatre. I believe that in the mid 1950’s this theatre was owned by a Mr. McKnight who also owned the nearby Oaks Theatre on Solano avenue in Berkeley. I can recall a character named “Kara Kume” performing magic on the snack bar roof at intermission one time. Also, a jumping B&W cartoon figure called “Spotty” on the screen. The idea was to catch “Spotty” with your car spotlight during intermissions. Puffy Pete popcorn and Toddy were my favorite snack bar treats.

There was an historic adobe house on the property that belonged to the Peralta Family. It mysteriously burned down when they were planning to build the original El Cerrito Plaza.

What was once a dog track and later a large trailer court has now become one of the largest drive-in movie theaters on the Pacific Coast. After months of construction, the El Cerrito Motor Movies, at Fairmount Avenue, a block east of San Pablo Avenue in El Cerrito will have its opening tomorrow night. The drive-in, which will be operated under direction of Blumenfeld Theaters, will have three changes of program a week, the change days being Friday, Sunday and Tuesday.

As a child from the ages of 4 to 7 (1954-1957) my family lived on the corner of Clayton and Lincoln in El Cerrito. On Saturday nights in the summer at early dusk I’d occasionally climb on the roof of our house along with my sister and brother and try to watch the El Cerrito Drive-In movies. We never really knew what we were watching but it was always fun to pretend that we were there. Sometimes other kids in the neighborhood who lived near that corner were also up on their roofs. We never worried about falling off and apparently our parents didn’t either. As much as I enjoyed The Plaza when it was built I missed that old drive-in and the old adobe house.

A 1946 aerial photo still showed the dog track, and a 1958 aerial showed a shopping center already built on the site.

The El Cerrito didn’t appear in the Film Daily Year Book drive-in list until the 1950 edition. It was still listed in the 1955-56 Theatre Catalog, and it stayed in the ever-slow-to-notice Motion Picture Almanac’s list through the 1959 edition.

I’ve uploaded the Motor Movies' grand opening ad and a USGS aerial to the photos section.

The drive-in’s final entry in the San Francisco Examiner’s movie listings was on Sunday, Nov. 25, 1956. On June 11, 1957, the Oakland Tribune reported that construction work had begun on a $6 million Capwell’s department store “primarily on the section of land formerly occupied by the El Cerrito Motor Movies.”