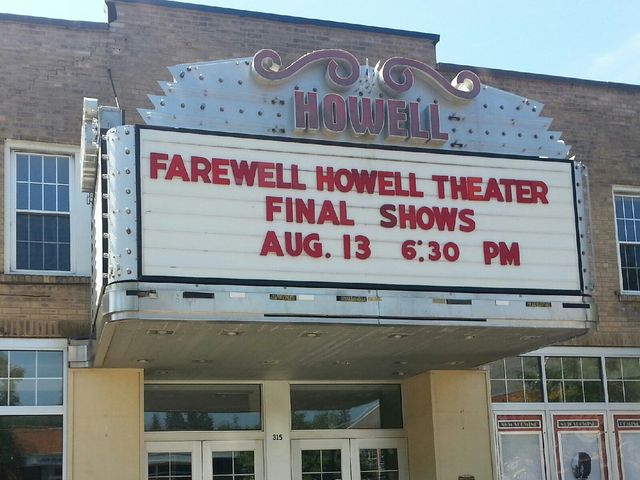 The Howell Theatre was opened December 11, 1928 with Marion Davies in “Show People”. It was both a movie house and a live entertainment venue. It replaced the smaller Temple Theatre (located one block west) that was apparently suitable only for movies. It also provided a stage and orchestra pit suitable for musical and live entertainment that would have been previously held at the Howell Opera House that closed several years earlier. The theatre was built by the Locey family.

As late as New Year’s 1932 there was still live musical entertainment at the theatre along with movies. In 1938 the Howell Theatre was extensively renovated by the Schulte Amusement Company of Detroit which had acquired the theatre. The renovations by the Johnson Construction Company included more spacious seating (which remain) and bathrooms, new projection and sound equipment, acoustical treatment, and a new marquee that complimented the original vertical sign that was retained.

Schulte Amusement continued to operate the theatre for many years, although by 1944 the theatre was being used exclusively as a movie house. In 1956 they again replaced the marquee along with the original entrance and canopy. The original theatre sign and 1938 marquee were also removed. The original storefronts were not altered and remain to this day, although some architectural elements may have been covered over.

By 1970, the theatre had been acquired by Wisper- Wetsman Theaters, that ran the theatre as the Howell Theatre Corporation. During the 1970’s the plaster walls were covered by draperies and the movie screen was moved to the front of the proscenium to accommodate a larger picture. The sound system was also upgraded around this time and it remains.

In 1998 the theatre was placed on the market and closed its doors in December, 1998. The theatre was acquired by the City of Howell in June, 1999.

Today, the Howell Theatre has been restored from top to bottom. The brand new marquee welcomes you into a totally remodeled and restored interior. Two auditoriums with new seating, DTS sound, as well as immaculate restrooms. An excellent snack bar completes the picture.

Well … sadly, the 86 year-old Howell appears to be permanently darkened, according to my exhibitor partner and current Howell, MI resident, Miss Barbara Jean Babbs. Miss Babbs interviewed a Howell Theater employee last month and learned that the venue had been sold and is slated to become an ‘expensive restaurant.’ As a life-long picture show aficianado, I find atrocities like this to be extremely disheartening. Trendy eateries have a reputation to come and go. It is our hope that the lion’s share of the moviehouse is left intact, so that the possibility of the Howell Theater being re-opened one day remains. These old theaters tended to be the heart and soul of the local communities they served … a gala gathering place. Nothing gold can stay. Dave Lounder (DaveLounderEnterprises.com), CT

thehowelltheater.com site states: The theater is closed; however, check back for updates on the Root Restaurant coming soon!

Dave Lounder THE DRIVE-IN THEATRE PRESERVATION SOCIETY TheDriveInGuys.com on August 5, 2014 at 3:45 am

Curious as to what Mr. DePerro paid when he ‘bought’ the theater?? 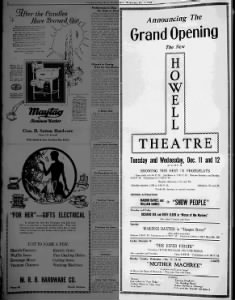 It appears that my grandfather Albert S. “Al” Johnson remodeled the Howell Theater, which first opened in 1928, in 1938. His theater job slides include one image of the theater taken in June 1948 with “Sun Mon Robert Young in Sitting Pretty” shown on the marquee. I’ve uploaded a copy to this page.

In this image, the theater is bracketed by a sandwich shop on the left and a bus station on the right, and its exterior is similar to other Johnson theater projects. The marquee and vertical sign are consistent with a late 1930’s style, and the front doors have full glass panes. The blackened areas of brickwork on the second story, which at first glance appear to be smoke damage, can also be seen in a photo apparently taken in 1956 on the WaterWinterWonderland.com site, so it’s not clear what caused this discoloration.

The Howell Theatre is one of just eleven of the more than sixty Michigan theaters that my grandfather’s Johnson Construction Company built or remodeled that is still open today (April 2021).