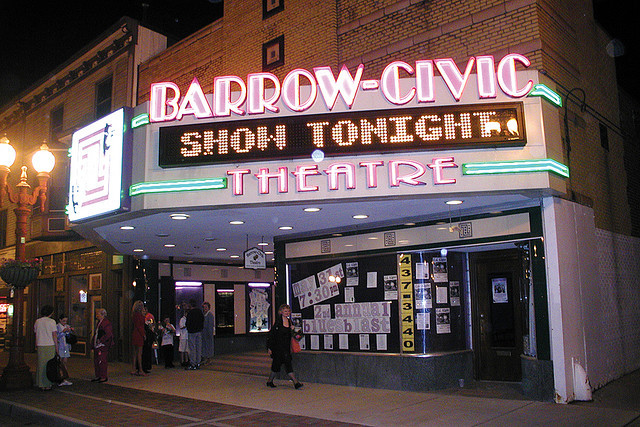 Opened as the Kayton Theatre in May 1946, it was a replacement for the Park Theatre which had been destroyed by fire. This is a small blocky Streamline building in tan brick with square terra-cotta accents on a central tower. The outdoor booth is off to the left and very deeply recessed under the marquee, which is a pretty ugly imitation old sign with market research colors (purple and green) and electric signage that belongs on a freeway.

The barber shop on the right is now part of the ‘Little Theater’. It is now a community arts center. The auditorium is nothing special. It’s done in that very boring dark painted style that one often finds in visitor’s centers.

My husband and I were at this theater last fall during Franklin’s annual fall festival,Apple Fest. We asked one of the ladies at the theater to give us a tour and they showed us the auditorium along with their Titanic display that day. There is a theater in nearby Clarion PA (Orpheum), but don’t believe it is listed on this website…..yet.

Lost Memory: Thanks for this info on the Barrow Civic Theater, but I wonder how it came up with the name Barrow? And do you know anything about a theater being in Titusville PA?

Here is an undated photo:
http://tinyurl.com/yw34z3

The Kayton Theatre in Franklin opened May 8, 1946, as reported in Boxoffice of May 18. The new theater, designed by architect Victor A. Rigaumont, replaced the smaller (550 seat) Park Theatre which had burned in November, 1944, not long after a costly renovation. The Kayton’s lobby occupied the site of the Park, and the auditorium was built on formerly vacant land behind the Park’s site. On opening, the Kayton had 1037 seats. The house became the flagship of the small Kayton Amusement Company circuit.

On June 1, 1946, Boxoffice published a photo of the Kayton’s spacious auditorium, but it was printed upside down. The art moderne ceiling looked as though it would have made a splendid dance floor.

The Kayton was originally operated by a partnership consisting of Leonard T. Houghton of Franklin and Paul V. McKay of Montgomery, West Virginia, where they operated another Kayton Theatre. The partners also then operated the Avalon Theatre in Montgomery, the Orpheum in Franklin, and the Camden and Hollywood theaters in Weston, West Virginia. A Kayton Theatre the partners had operated in Grove City, Pennsylvania, at least as early as 1938 had been sold in early 1946 and renamed the Lee Theatre by the new owners.

Not especially relevant, but the history section of the Barrow Civic Theatre’s web site features the delightful observation that “…in 1991, provenance shined on Civic through the generosity of Franklin native Charles A. Barrow.” Oh, how wonderful it is when provenance shines- especially in some place more needful of its shining than, say, Rhode Island!

I agree with freeway-like electric signage. When passing through town there’s no time to see more than 2 words, whereas antique, changeable signage had the whole bill right here in one view.

Circa 1957 photo as the Kayton, added courtesy of the AmeriCar The Beautiful Facebook page.