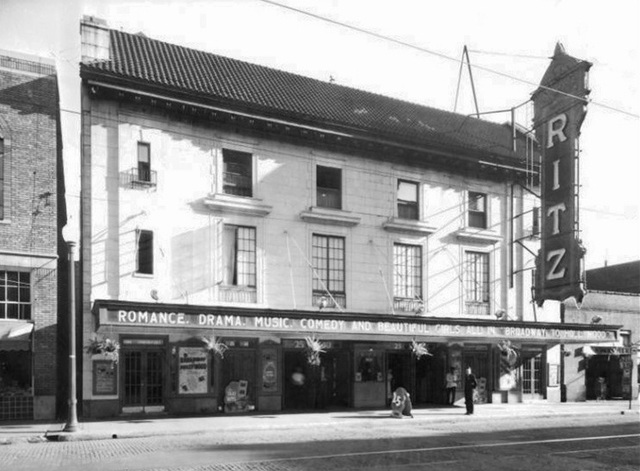 The Ritz Theatre opened on August 16, 1926 with Buddy Rogers in “More Pay Less Work” and five acts of Orpheum-Keith Vaudeville on the stage. Seating 1,800 it was equipped with a theatre pipe organ. The Ritz Theatre was built and operated by Interstate Amusement Co. It became part of the RKO Circuit by 1932 and was later operated by Paramount.

The Ritz Theatre was remodeled in 1962 and reconfigured for Cinerama. It became the Ritz Cinerama at that time. 3-strip Cinerama played from June 1962 through November 1963. It then went back to regular feature presentations until it closed in 1977. It also got its old name back, Ritz Theatre. It has since been demolished.

I saw many movies at the Ritz in the 50’s and 60’s, including “It’s a Mad, Mad, Mad, Mad World,” “Dr. Zhivago,” and “The Wonderful World of the Brothers Grimm” (in Cinerama). It was torn down in the late 70’s or early 80’s, because by the time I came back to B'ham in 1983 it was gone. It was one block down and one block over from the Alabama, so on a Saturday afternoon you could sometimes see two movies, one at each place and grab some lunch at the Krystal (my God, did we really eat that stuff?) on the way between them. This saved on bus fare.

Krystal Burgers is spelled with a “K.” I remember the Cinerama Ritz (NOT Ritz Cinerama) well. Saw “How the West Was Won” and other Cinerama presentations there. It is a shame it is gone.

I have three distinct memories of the Ritz while growing up in Birmingham.

1962: How The West Was Won. My parents told me before the show that I was going to see a movie so big that it took 3 screens to show the entire picture. I guess that is how they had to describe it so a 10 year old would understand. I do not remember much about the movie itself because I was constantly looking at the right and left screens to see what was going on away from the “action.” In 1998 I made the trek to Dayton, Ohio to see HTWWW at the Neon Cinerama. It was not until then that I was able to appreciate the incredible focus and 7 track sound.

1965: Doctor Zhivago. The Ritz hosted many roadshow movies while the other ABC operated theatre, The Alabama, played the more standard fare. My mother took me to see this one because she thought it would appeal to my interest in History. (My father, having seen it with her earlier said “…once is enough.”) She was right, as usual, and from the first viewing Doctor Zhivago has been one of my favorite movies of all time. I do not know how many times I have seen it over the years, but my viewings have been in every type of venue from mono shoebox theatre to 70MM presentations at the Fox Theatre in Atlanta. I have also had the pleasure of working at several theatres where it has played, managed one, (South DeKalb) and run it as the projectionist twice, both times at the Fox. I now have the new 2 disc DVD, and never tire of seeing it.

1965: Sound of Music. The Cobb operated Eastwood Mall Theatre was the main competition for the Ritz and Alabama although its 1960’s draped auditorium and living room style lobby were no match for these other two fine places in atmosphere. SOM played its reserved seat engagement at Eastwood, but the day after Zhivago left the Ritz, SOM was brought in as a filler until whatever Christmas show they had booked that year opened. Since I had already seen it at Eastwood, it was not the movie itself but the condition of the print that made this a notable experience. In those days, prints were not produced in anywhere near the numbers of today. More like 300 than 3000. By the time they got to an engagement such as this, there was no telling how many poorly maintained booths and film butchers they had encountered. The Ritz did not get the film in time, or did not bother, to inspect it. It was full of scratches, sound pops, and at least half a dozen breaks, one of which lasted for at least 15 minutes. This made the show end almost an hour late. The result was a massive traffic jam on Second Avenue on the Friday before Christmas as my mother and dozens of other parents there to pick up their children, had to wait in their cars for us to leave the theatre. (Remember, this was in the day when most of the department stores, and by extension Christmas shopping, were still downtown.)

I am sure that I visited the Ritz on other occasions but do not remember any in particular. I also remember going to the Alabama, Empire, Melba, Homewood, and even the Shades Mountain Drive In, but in those days I was more interested in the movie than the venue.

I had the unforgettable experience of seeing Mutiny on the Bounty there and thought it was the first Cinerama showing, maybe not. I was amazed at how you felt surrounded and so small by the ocean on that screen. It was also the first movie I remember seeing with Marlon Brando in it. I also saw Dr. Schivago, but didn’t remember that it was at the Ritz.

When the Ritz was converted to Cinerama, it was closed for months and was a huge story when it reopened.

I too rode the bus downtown to the movies and would eat at the Krystal beforehand. Sitting at the counter, watching a slab of Kystals steaming on the griddle and the cook flipping at least a half dozen at a time, and the smell of them with grilled chopped onions is forever etched in my memory. Without Krystal in this part of NC, stopping to get a half dozen, whenever I’m in town is a treat.

Doctor Zhivago played at the Ritz during the fall of 1966 not 1965. I saw it for the second time on its final night of the run which was December 22, 1966. The next day, December 23 was the day I saw the Sound Of Music which I also mention in that post.

Thanks to Michael Coate for helping get the dates right.

Reading the above comment about the Ritz being bought by RKO, it occurs to me that it was probably the venue for the original version of King Kong. I dont know why, but it strikes me as interesting as a movie and theater buff to realize where well known movies played. Most people probably today remember Ritz for its Cinerama era that played those great spectacles, but I was born after that and what played there from the pre-cinerama “contract golden era” of Hollywood fascinates me more. As the Ritz entered its last decade or so of existence, I saw three children’s movies there: As a child, I saw Dr. Doolittle, Chitty Chitty Bang Bang and Willie Wonka and the Chocolate Factory at the Ritz. Those are the only movies I remember seeing there, but Im sure there were more.

The Birmingham Rewound website has a lot of movie ads in their “This Month In History” feature. In the one for March of 1977 there is an ad for a company called Bowie Theatres. Among their listings was one for the Ritz which was playing Woodstock one show per night at 8PM. ABC was still in town running the Alabama, Roebuck, and Bessemer Twin, so apparently they had disposed of the Ritz before they sold out to Plitt, which soon sold out to Cobb.

They have also reproduced an article from the Birmingham News from 1967 announcing that ABC had hired a director of promotions to promote the upcoming opening of “The Bible.” It stated that she would be working out of the ABC offices in the Ritz theatre. 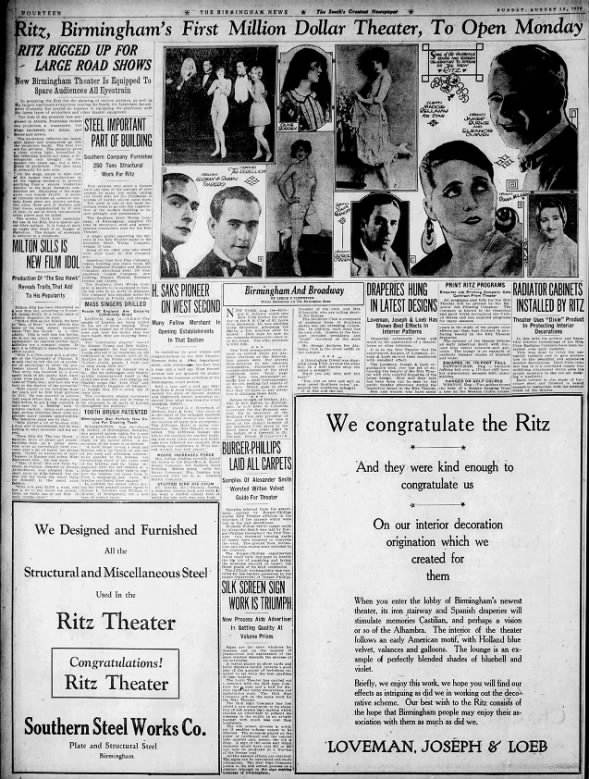 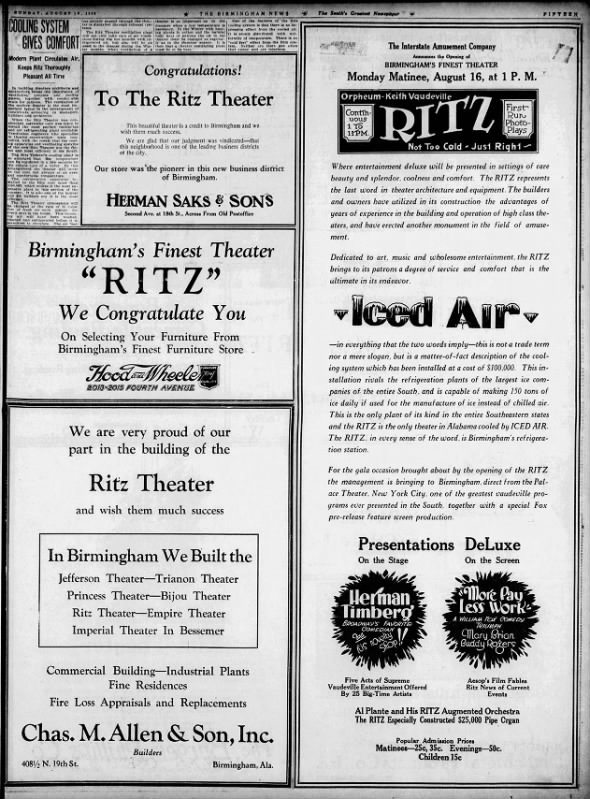