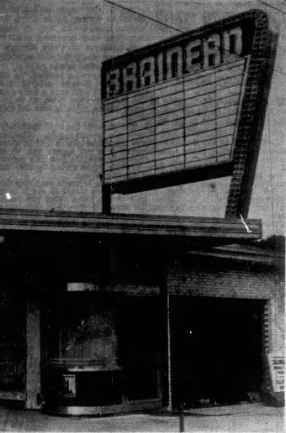 The Brainerd Theater originally opened on August 4, 1948 and was converted to Cinerama on July 11th, 1962. It continued 3 strip until October 27th, 1963. It then converted to 70mm on June 3rd, 1964 and continued as a roadshow/hard ticket house until it closed in 1987 presenting 70mm features. The screen measured 75ft by 26ft on the curve. The longest run of any feature at the Brainerd Theater was “The Sound of Music”. A Walgreens now operates at this address.

This can’t be right. I am a native of Chattanooga and worked at the Brainerd over Christmas vacation in l960. I think that the theater had been around for several years before that. It is true, however, that this theater showed Cinerama.

i believe the Brainerd Theater was opened in the summer of 1948. My parents worked part time there in the fifties. I have a photograph from the Chattanooga News-Free Press showing my grandmother (she worked at the Park Theater) standing in front of the new cinemascope screen that was installed in 1953. I saw many a movie at the Brainerd. I remember some of the staff that worked there in the fifties, including Miss Plemons as manager.

What about the drive-in theater in Dunlap? Someone needs to post about that one, because it’s a still-operating drive in theater.

I too remember the Brainerd Theater very well. During my grammar school days, my friends and I from Elbert S. Long would roller skate on Saturday mornings, then walk over to the Brainerd for the Kiddie Matinee. There would be a sea of roller skates in the lobby during the show. The Brainerd had a “cry room” on the same level as the projection booth where birthday parties or such could view a movie. Independent Theaters (Moses Lebovitz & Jay Solomon) sold the Brainerd to the Martin Theaters. I know the stories about most of the theaters in town because my grandfather was in the ownership group before Independent Theatres in the 1940s and early 1950s. We lived next to the Skyway Drive-in on Brainerd Road.

Jim, my father was the assistant manager at the Brainerd Theater. He knew one of the Solomon brothers (not sure which one). His was a part time job at night and weekends. This would be in the early fifties. Yes there was a cry room and party room. Seems like the party room was upstairs beyond the projection room, and the cry room was on the first floor behind the right rear seats in the auditorium. I remember the Skyway Drive In Theater for taking my high school girl friend out there. WHAT FUN!. This would be in the late fifties. The kiddie matinee was always packed from what I could remember. The skating rink was almost across the street that dead ended on Brainerd Rd. (Oriole Dr). We lived on that street, so we always would walk to the Brainerd. I went to Sunnyside Elementary, Brainerd Jr. High. and Chattanooga (City) High. You have brought back a lot of memories. Thank you. Willard.

The Brainerd Theatre was under construction, but not yet named, when an item about it appeared in Boxoffice Magazine’s issue of December 20, 1947. Owners of the house, Independent Theatres, offered a two year pass to the person who came up with the best name for the new theater. I can’t help but conclude that not too much effort was put into the winning name.

The item said that Independent had made the same offer several years earlier, when their Riviera Theatre was under construction. The Mediterranean coast may not be the first image that comes to mind when one thinks of Chattanooga, but at least whoever won that earlier competition used a bit of imagination.

The opening date of the Brainerd Theatre was August 4, 1948, according to an item in Boxoffice Magazine of August 7 that year.

There’s a very good chance that Selmon T. Franklin was the architect of this theater. He designed a number of projects for Independent Theatres during the 1940s, and had been engaged to design a large theater on Brainerd Road as early as November, 1944. It’s possible that the 1944 project was the Brainerd Theatre, and construction was delayed by post-war materials shortages.

The conversion of the Brainerd for Cinerama in 1962 reduced the seating capacity to 640, according to the July 9 issue of Boxoffice, which also said that the reopening of the house had been scheduled for July 11.

The Brainerd Opened On August 4, 1948 With Van Johnson In “The Bride Goes Wild” Along With A Variety Of Shorts, News, And An Unknown Cartoon.

The August 18, 1948 issue of The Exhibitor said that the Brainerd Theatre was designed by architects Gill & Bianculli. The latter was undoubtedly Mario Bianculli, and the former was most likely Harrison W. Gill Sr. Their collaboration may have been a one-off, as both soon became well-known architects in their own right.