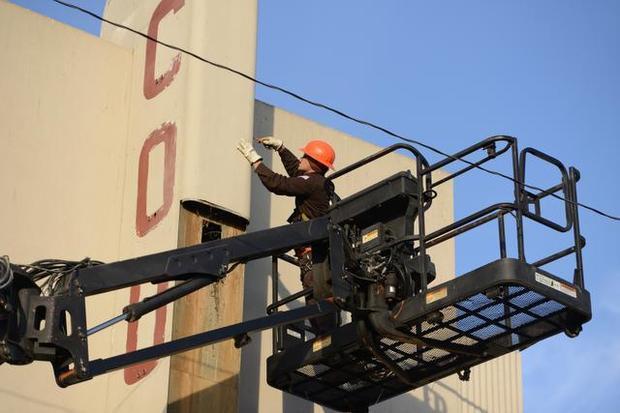 This Court Theatre replaced an earlier 350 seat, Court Theatre, on another site on C Street a few blocks away, which was destroyed by fire on July 12, 1945 (it has its own page on Cinema Treasures).

The new Court Theatre opened on April 23, 1946. Empty (except for pigeons) since closing in 1977, the Court Theatre in Livingston was purchased by the city in around 2000 and a committee was in the process of seeking a $2.5 million state Cultural Endowment grant to refurbish the building and to add office space and a bistro. It was demolished in January 2014.

The theatre’s exterior was very similar in appearance to that of the old Strand/UA Cinema III/Mainzer Theatre at North Street and Main Street in nearby Merced, CA.

More news for members of the Court family:

Here’s a brief item from the October 13, 1945, issue of Boxoffice Magazine: “Construction has begun on the new Court Theatre on Third near C. by the A.R. Liner Co. of Merced. Stanley Court, owner, offers no guess as to when the building will be completed.”

“LIVINGSTON, CALIF.— Without motion pictures almost a year, this town welcomed the recent opening of the new Court Theatre. It replaces a theatre destroyed by fire last July 12 and was built by Mayor Stanley Court, who with his father, the late Albert Court, gave Livingston its first motion pictures in the old town hall in 1912, and who later built the original Court Theatre.”

(I can’t absolutely swear to the accuracy of the dates July 12 and 1912, as the scan of this issue of Boxoffice is pretty sketchy and hard to read, but I’m about 90% certain they’re right.)

Also of interest, earlier issues of Boxoffice, including that of July 21, 1945, which reported that the fire had occurred, invariably refer to Stanly Court as the operator of the Livingston Theatre in Livingston. The item about the fire says: “The Livingston Theatre, Livingston, was the scene of a fire the other evening. The amount of damage has not been reported. Owner of the house is Stanley Court, who also runs the Atwater at the town of the same name.”

A few other issues also mention Stanly Court as the operator of the Atwater Theatre, and issues from the mid 1950s add that he was by then also operating the Delhi Theatre at Delhi.

Thanks Joe for your comments.Very interesting. They help me flesh out the story of that part of my family that came to America. I had heard about the cinemas in Atwater and Delhi from James Court a descendant of Albert and Stanley. Jamesson Jason also writes a comment (above). In the entertainment world of that part of California it would seem that the Courts were pretty big! For the sake of completeness I am fairly certain that the Stanley you mention was in fact Albert Stanley, Alberts son no doubt using his second name to avoid confusion. Stanley is in fact the maiden name of Stanleys grandmother(Elizabeth Stanley)and given to severalof Alberts children.
Thanks again. Are you able to tell me how I might access Boxofficebearin in mind that I live in Leeds England? Thanks Roger Court

Roger: Issuu has some issues of Boxoffice available online. I find them easier to search via Google than through the site’s own search feature. Use Google’s advanced search and use issuu.com as the domain, and put boxoffice (single word) in the top box of the form, along with words specific to the subject you’re searching for. Fewer words are usually better than more.

Thanks Joe. My P.C.skills are sadly lacking but I`ll certainly attempt the rout you suggest. Thank you

Vincent Rainey, architect of the Court, went on to design many theatres for the Syufy family. His signature designs, the Century domes in San Jose, are still in operation. Other domes were designed by him and built elsewhere, and he kept designing well into the multiplex era, indeed into the 1990s.

To Roger Court. I grew up in Livingston and witnessed the Court Theatre fire. I attended the old theatre regularly as a child. I have much info on Albert Stanley Court and his family and background of family in Canada and England as well as the old Court Theatre if you are interested. You may contact me at offline if you wish.

Thanks Joe. I have emailed you today. Only just saw your posting. Very excited. Best wishes Roger Court

What is the status of the renovation? Any new information?

I grew up in Livingston; while I haven’t resided there since 1979, I have fond memories of the Court theatre. However, the best thing would be to knock it down. The building is a wreck. I recently visited Livingston & talked to a woman who recently got to go inside of the building; she said it looked horrible. Let the Court theatre go-it’s time.

The Court Theater has been demolished, Jan 2014. The reason was it cost too much to repair. The elder landmark is gone. Livingston to me will never be the same.