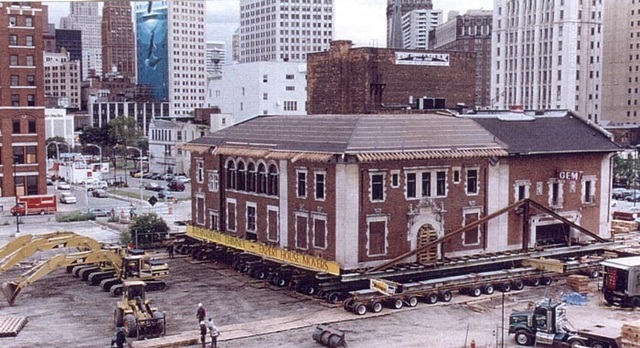 Opened in 1928 as the Little Theatre, for a private women’s group called the 20th Century Club, with a performance of “Cyrano de Bergerac”, the Gem Theatre had a full stage, orchestra pit, and balcony which sat about 200 patrons. The exterior resembled a Florentine Renaissance palace, while the interior contained minimal décor.

Since its opening, the theatre has had several name changes, first the Rivoli Theatre in 1932, then the Drury Lane Theatre and Europa Theatre in the next couple years, and finally in 1936, the Cinema, a name which stuck until the mid-1950’s, when the theatre was screening foreign films. In 1959, as the Vanguard Theatre, the format was changed to stage shows, but by the mid-1960’s, decline had firmly set in, and as the Gem Art Theatre, became showing adult films. The theatre closed in 1978.

Charles Forbes, who also owned the nearby State Theatre, purchased the Gem Theatre in 1991 and began an eighteen-month restoration, which brought the small house back to its original appearance. The Gem Theatre once again was home to live stage performances.

In 1997, the Gem Theatre made national news when the theatre was lifted from its former foundation and moved about half a mile away from its original location to make way for the construction of the new Detroit Stadium. The move placed the Gem Theatre in the Guinness Book of World Records, as the heaviest building ever moved on wheels, at about five million pounds. It arrived at its new home at Madison Avenue and Brush as a crowd of several hundred cheered.

After a small restoration, the Gem Theatre reopened in late-1998.

In 1985 the Gem Theatre was added to the list of the National Register of Historic Places.

The Gem looks so much better over on Madison since the move. It looks like it’s always been there. Chuck did the city a huge favor in saving the State, and Gem, and kept the Fox intact during his ownership.

The Gem was the heavist building moved at the time. The Shubert later supased that record.

The Gem interior was in really bad shape before they restored it, correct?

An exterior shot from the “bad old days”: View link

All the more amazing when you see the “before” pictures. If this doesn’t sell you on the notion of recycling historic buildings, I don’t know what will.

What a charming theatre! The restoration and move was well worth it. Kudos to all those who saved the Gem.

I recently learned of this theatre and its monumental relocation! Congrats to those who saved it by moving it.

The Little Theatre opened as a movie theatre screening international cinema at 56-58 E. Columbia Street. The Motion Picture Guild of America Circuit launched the theatre. It had locations of Little theaters in Philadelphia, Newark, New York City and Washington, D.C., amongst others. The George DeWitt Mason architected venue launched in downtown Detroit on September 7, 1928 with the Motion Picture Guild presenting Pierre Magnier in the film, “Cyrano de Bergerac.” And if people missed the buzz around the theatre, it was because most of the attention was given to the Fox Theatre’s development and opening. The Fox launched just two weeks later about a baseball throw away on September 23d commanding the attention. Not too surprisingly, the Little Theatre closed on March 23, 1933. Its final film was “Zwei Menschen” with Charlotte Susa.

On September 16, 1933, under new operators, the venue became the Rivoli Theatre with the Polish film, “Noc Listopadowa” starring Mieczysław Krawicz. The Rivoli closed on January 11, 1934 with Max Hansen in the film parody, “Das Kabinett des Dr. Larifari.” But it may have been the showings in November of 1933 of “The Nude World” that doomed W. H. Kinnear’s Rivoli. The theatre opened the film on November 8, 1933 and it ended up being held over until month’s end - an unprecedented run for the Rivoli. But the police paid a visit and Kinnear ended up in legal trouble in January of 1934 which coincides with when the venue closed. It was also a foreshadowing of what would occur 32 years later when the venue would go all adult films for a 10-year period.

The venue reopened September 7, 1935 as the Europa Theatre specializing in German films. It relaunched with Marta Eggerth in “Kaiserwalzer.” The theatre made headlines booking two Russian films, “Peasants” and “The Youth of Maxim,” which were banned by local officials as Soviet propaganda and that move was supported by the local court system. On January 1, 1936, the Europa switched from German films to repertory films. The Europa closed in February of 1936. In October of 1936, the theater owners did get news from the State Supreme Court of Michigan that the banning of the film violated the operator’s First Amendment rights.

Harry Nathan took on the venue and rebranded it as Cinema Theatre on February 25, 1936. It switched back to European films starting with Leni Riefenstahl in “The Blue Light.” The Cinema belly-flopped closing on May 14, 1936. But Ira Kaplan revived the venue on September 19, 1936 reopening as the Cinema with the film, “Cloistered” supported by a Mickey Mouse cartoon and a Brittany travelog. The Cinema Theatre was a true independent showing art films and exploitation titles. A 1937 Russian film booking by the Cinema Guild of Detroit led to another injunction… but this time for false advertising. The Cinema Theatre closed on July 18, 1943 with two French films.

On November 11, 1943, the venue came under the operation of Telenews Theatres Circuit reopening as the New Cinema Theatre and the film, “The Scarlet Pimpernel.” Telenews bailed on the Cinema but Martin J. Lewis of Continental Circuit took over the theater. Continental was the New York-based firm best known for art houses including New York City’s 55th Street Playhouse, Thalia, Fifth Avenue Playhouse, the 72nd Street Playhouse, and the Heights Theater amongst others. Cinema Theatre closed on April 27, 1952 with John Laurie in “Edge of the World” and Robert Flaherty’s “Man of Aran.”

New operator Paul Broder gave the venue a major refresh and greeted customers back to the New Cinema Theatre which relaunched Easter Sunday, April 18, 1954 with Richie Andrusco as “Little Fugitive.” But art film wasn’t what people wanted and it switched to sub-run double features. The Cinema Theater’s tenure ended grinding prints of “Sabrina” and “Rear Window” continuously until 3a on April 20, 1955 likely closing at the end of a 20-year leasing period.

On March 8, 1956, Studio Theatre Corporation of Livernois reopened the Cinema and renamed it as the World Theatre and shared its bookings with the Studio Theatre. Its reopening film was “The Trouble with Harry.” The theatre was refreshed with widescreen projection to play VistaVision films. That continued until October 5, 1958. The Trans Lux Krim had become the art house of choice and the World Theatre closed January 11, 1959.

The theatre returned to its short-lived live stage play days when it was renamed the Vanguard Playhouse in June of 1959. It was officially renamed the Vanguard Theatre in 1963. It closed on January 2,1966 with a matinee of a children’s play - “The Emperor’s New Clothes” - and an adult evening play, “Over the Counter.”

On January 14, 1966, the venue relaunched as an adult movie theatre first known as the Gem Theatre with the films, “For Members Only” and “Women Around The World.” In late February, it would be rebranded as the Gem Art Theatre. The Gem Art appears to have closed on November 9,1976 after showings of Nadia Henkowa starring in “Devil’s Ecstasy” and Sativa and Teddy Steel in “Nostalgia Blue" likely at the end of a ten-year leasing period.

Chuck Forbes bought the Gem for $5,000 in 1990 reopening with live fare in January of 1992. In 1997, the 5.5 million pound theatre closed. Weight is rarely an issue but with a new baseball stadium being built nearby, the Gem was in the way. A solution was created so that it and its neighboring building, a nightclub also owned by Forbes, could be picked up and moved from 56 E. Columbia and moved five blocks away to 333 Madison Avenue. International Chimney of Buffalo took six months prepping for the move which began October 16, 1997. It relaunched in its new spot on September 9, 1978 with, “I Love You, You’re Perfect… Now Change.” It was still going in the 2020s as was it contemporary, the Fox Theatre, only now a little further apart from one another.