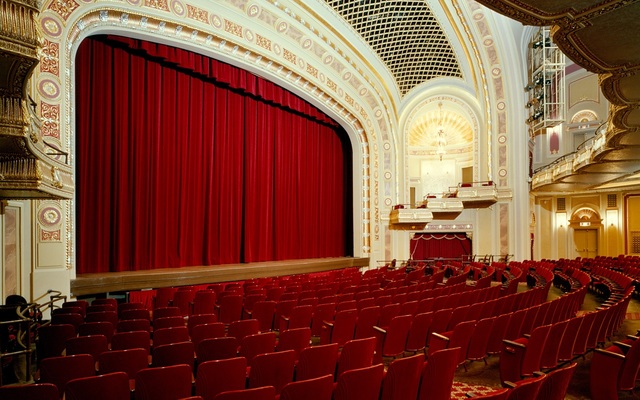 The Tivoli was built by the Chicago firm of Rapp & Rapp, and opened on March 19, 1921 after almost 2 years of construction, costing $1 million, a huge sum for the day. No expense was spared to make this one of the most lavish and luxurious theaters Tennesseeans had ever seen. In fact, after it opened, it was called The Jewel of the South.

The Tivoli Theatre featured a domed ceiling in the lobby, with gilded plasterwork and imported European crystal chandeliers. The theater originally hosted both vaudeville and silent movies, but was wired for sound in 1929. It also was one of the first public buildings in Tennessee to be air conditioned. In 1926, Paramount acquired the Tivoli Theatre, making it a part of its empire, in which it would remain until after WWII.

From its opening all the way into the 1940’s, the Tivoli Theatre remained the premier entertainment venue for the city, but by the end of the 1950’s, the theater’s audience had been lured away by television and it closed in 1961.

After a partial renovation, the Tivoli Theatre reopened two years later, but closed again in the early-1970’s. The City of Chattanooga purchased the Tivoli Theatre in 1976, and in 1979, plans were begun to restore the palace to its former glory, but work did not actually get underway until 1986.

Three years later, the Tivoli Theatre reopened, brilliantly and painstakingly restored to its 1920’s appearance, along with a new sound and light system, a larger stage, new dressing rooms, a green room, and rehearsal space.

Today, the Tivoli Theatre is home to the Chattanooga Symphony and Opera, as well as concerts, dance, and Broadway shows.

The Tivoli Theatre will host a benefit concert for the Hamilton County Rescue Squad on Saturday, April 5, 2008, at 7:30 P.M. The Wurlitzer theatre organ will be played from the time the doors open about 6:30 P.M. until the start of the show, during the intermission, and possibly at the end of the program. The Wurlitzer has been prominently features on posters, in print advertising, and in radio and TV ads promoting the benefit program.

The enlarged views are a just personal preference for larger photos and you are not missing out on anything.

Brief shot of the Tivoli blade on the NBC Nightly News this evening.
A report from a Chattanooga jobs fair by the late Tim Russert’s son Luke.

My understanding is that the organ console was removed in l939 to make more seating space available for showings of Gone With the Wind. The cable was cut and the console put backstage with the pedal board thrown on top. I have a photo of it in this condition which I took in l962 during the period when the theater was closed. Manager Clye Hawkins graciously let me in to take a few pictures.

Bill Barger and friends reattached the cable to the console in l965 so that it could be played for a Barbershop Quartet show. The Chattanooga Times photo shows that there were in fact no stop tabs on the console. I think Bill had to register it with the crescendo pedal.

Many thanks to the present crew who looks after the instrument.

The full name of the local associate architect for the Tivoli was Reuben Harrison Hunt.

Anyone have information on how the Tivoli made the stage larger? Did they take out a back wall and move the stage back or did they move forward and lose seating? Any help on details of how they enlarged the stage to accommodate a Symphony is greatly appreciated.

Hello and i hope someone can help with either photos or some info on the guys who were Ushers at the Tivoli in the late 30’s or the 40’s which my father was and i remember my dad telling me of the uniform he had to wear and the inspections for it was Burgandy and had a lot of brass buttons and he did enjoy it so. He has passed and his name is Vernon K McAllister and any info would be wonderfull. Thank You his son Robert

Hey guys I’m writing my senior thesis on how movies and films affected society, specifically in Chattanooga between 1890 and 1965. I’m going to be using the Tivoli for a heavy portion of the paper, I would love to get as much primary source information as possible about the tivoli and chattanooga theaters in general. I am especially interested in getting in touch with Jarhead who mentioned in a comment that his father was an usher. Anything you guys could do would help tremendously, you can email me at Thanks!