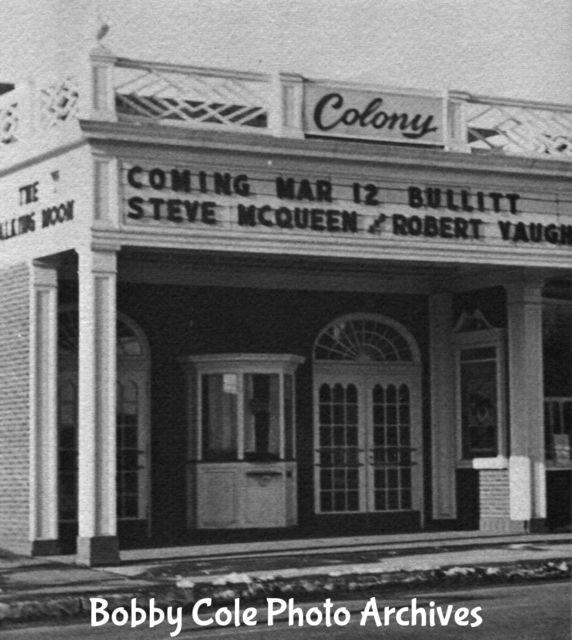 The Colony Theatre was opened in summer of 1941 with 600 seats, all on one level. Visited this theater on many occasions in the 1960’s and 1970’s. The entrance had a columned portico.

Sorry to see it go. Was converted to a triplex in its later years. It was demolished in May 2004.

Nice single neighborhood theater – I don’t think it was ever doubled. Saw “Remains of the Day” and “Shadowland” here in mid-90s. I’m not sure when it closed, but the former location is now part of the huge “Livingston Town Center” redevelopment project.

The Star-Ledger (Newark, NJ), Nov 9, 2003 p001
In toon; Director and N.J. native Joe Dante is animated about his latest big-screen opus – and that’s not all, folks. (SPOTLIGHT)
Full Text: COPYRIGHT 2003 The Star-Ledger. All rights reserved. Reproduced with the permission of The Star-Ledger by the Gale Group, Inc.

If you pay close attention to the films of Joe Dante, you’ll notice the name “Colony” comes up often.

In “Gremlins,” it’s the movie house where the mischievous creatures are torched. In “The Howling,” it refers to a New Age retreat with a sinister secret. In “Explorers,” it’s the drive-in theater where three pre-teen rocketeers crash-land.

The name doesn’t recur by accident. It’s a nod to the Colony Theatre, the old-time Livingston picture palace where the Jersey native first got bitten by the film bug.

Today, the Colony is a woeful husk of a building, closed for two years and slated for redevelopment into a shopping center. But when Dante was a grade-schooler during the 1950s, it was the magical Saturday matinee destination where he experienced such B-classics as “This Island Earth” and “The Incredible Shrinking Man.”

“It would be a quarter to get in,” said Dante, 56. “The first boy and girl got in free, so you’d line up at 11 a.m. even though the show didn’t start till 1 p.m. They would run 10 cartoons and two pictures. For years, I used to leave after the cartoons because (the feature attractions) had grownups in them and girls and it wasn’t interesting. Then one day I saw ‘It Came from Outer Space’ in 3-D and I was hooked. From then on, I haunted the place. It was like going to church.” ……..

The Colony was indeed converted into a triplex in its final years, and so an awful lot of the Art Deco ambience (or any ambience, for that matter) was destroyed. A pity. I had gone there a couple of times in the ‘80s when it was still a single-screen theatre, and by 1992, when I went back, it had been tripled. Projection and sound weren’t bad, but you KNEW you were sitting in a subdivided auditorium. without a single good seat. Having grown up in the '60s and '70s, I’ve seen a number of single-screen houses get carved up into little boxes. For me the worst part is that even in the “big” auditoriums in the nearby 14-plexes or 16-plexes, the screens are smaller than what you would’ve routinely encountered 30 or 35 years ago.

Listed as open in the 1944 FDY. Listed in the 1961 FDY as part of Associated Prudential Theatres, Inc.

I used to manage this theater in the early to mid 90’s. I do not know if anyone who comes to this site would care but every manager who ran the place during this time had some truly frightening experiences. Everyone thought the place was haunted.

Everyone went to The Colony. Saw a lot of good movies there. After the show, everybody went up the street to Friendly’s. Lots of good memories.

I saw my first indoor movie at the Colony – Walt Disney’s “The Shaggy Dog”. Then many more afterward… Most notable was James Bond’s “Dr. No”.

This theatre would have opened either 1940 or 1941 and the architects were John and Drew Eberson.

Saw Terminator 2 in the main theater there when it premiered. By that time they had tried to renovate it again and the other two side theaters were like private screening rooms, with the screens the size of big screen plasma TVs. It was a nearby cinema from where I lived that we alternated with General Cinemas Essex Green II-III. That whole block became a bunch of hoity-toity overpriced shops.