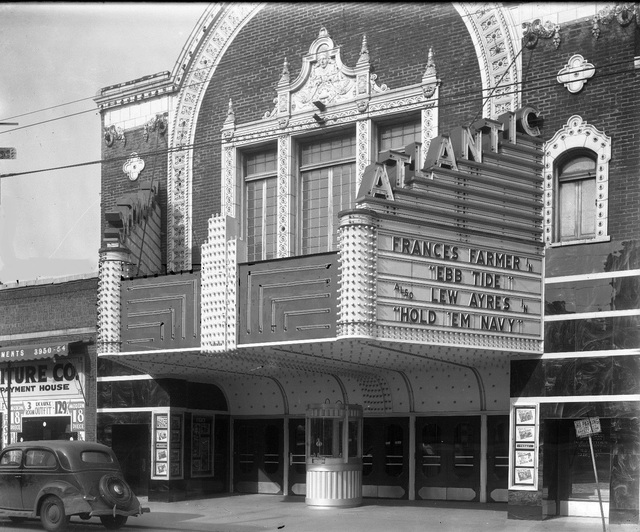 Opened in 1917 for the Schoenstadt circuit, this theatre, originally seating over 2,000, once contained a 3/11 Kilgen organ.

Designed by Henry L. Newhouse, the former Atlantic Theatre was located in what was once known as the South Lawndale neighborhood (today’s Little Village or La Villita) on W. 26th Street at Harding Avenue.

The Atlantic Theatre continued to operate as a movie theater into the 1980’s, last featuring Spanish-language films (by the mid-1970’s, it had been twinned operating as the Atlantic I & II). In 1996, long after it was closed, the interior of the theatre building was gutted and converted into shopping mall. The Atlantic Theatre’s facade, however, still remains more or less intact.

The Atlantic Theater was like my ‘second home’ on weekends from the mid 1930’s to 1941 when I moved away. I was born 76 years ago. Along 26th Street in the ‘South Lawndale’ community ( now called ‘Little Village’ we had approximately 6 movie theaters that I can recall, The Atlantic, California, Homan, Home ( the other names I can’t recall – maybe someone out there can help me, but the Atlantic was THE BEST of them all, seeing ‘Robin Hood’ – ‘Tarzan’ – The Wizard of Oz' – Astaire, Garbo, Bogart after entering that great red carpeted lobby and the great staircase to the 2nd balcony. We were treated always to a double feature,cartoons,newsreels, so many serials like ‘Buck Rogers’ and ‘Flash Gordon’ – all for a 10 cents admission. Saturday and Sunday afternoons spent with our friends at the Atlantic ( if they could come up with a dime – there was a depression then )was the best treat of the week, all gone now but the wonderful memories remain of what once was , never to return.

Here is a profile from the Illinois Historic Preservation Agency’s HAARGIS system. It includes a small photo.

If anyone has contact info for William Berinstein, please let me know. Still trying to get info on The Forest Theatre designed by Henry L. Newhouse. Thank you.
Craig Jacobs

I remember seeing Frank V Martinek, cartoonist of Don Winslow, at the Atlantic. What was the name of the theater just east of Pulaski Road (aka Crawford Ave) on either Cermak Road (22nd) or Ogden Ave???

It says here that the Atlantic was gutted. No offense to anyone, but I have observed that gutted gets applied to a broad range of situations. Did they just put in a bunch of false ceilings here or was the place really stripped down to four walls?

Inside, at least on the first floor, it looks like any other professional building, except with a sloped floor. I didn’t go upstairs, it’s possible that the ceiling may survive above dropped ceilings, but it appears like a pretty total gut.