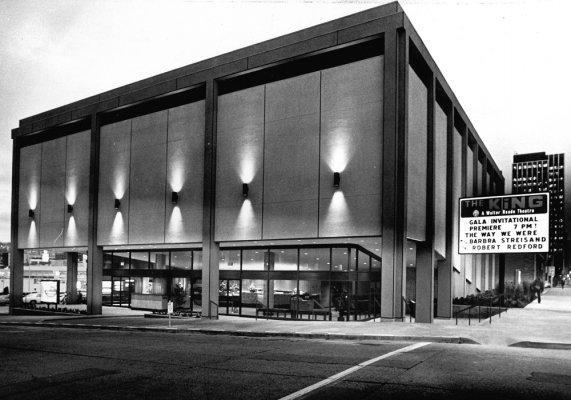 The King Cinema opened in 1974. It was operated by General Cinemas and Walter Reade Theatres.

The King Cinema closed in the late-1980’s and the theater became the King Kat Theater which hosted concerts, live performances, special events and occasional film programs.

It was demolished in early-April 2013.

One of several new high rise office towers for Amazon now sits in the site of the KIng. One of the plastic panels from the “King Kat” sign now hangs on the wall of a coffee shop across the street.

Ericrising; I worked there as an infrequent relief projectionist from November of 1981 until October of 1982 when I went full time. When I started, Henry Cannon was the chief projectionist and Jerry Keene was the #2. I replaced Jerry when he left in October 1982. Henry is in his 80’s, still active and happy in retirement. Jerry left town shortly after he left the King.

I’ll have to look for the pieve of the sign! I think I remember Jerry. I want to say I worked there until 1982?

I now work in the Amazon Doppler building which is around the corner on 7th and Westlake.

I worked at the King as a projectionist in the late 80’s and dprojected Lawrence of Arabia there in 70mm. The best of that was it was Carbon Arc light and not Xenon at the time. It was a beautiful thing to see.

Hi Dennis. The King had the last carbon arc lamps in use in Seattle. They were Ashcraft Super Cinex lamps. Water cooled, 13.6mm positive and 11mm negative trim. A beautiful light came from those lamps. Even though the screen was not curved, it was very large and the picture from the Norelco DP 70’s was a really nice thing to see. I remember that the bean counters in the Home Office did not seem to understand that we were not Xenon. Each month a Monthly Xenon Report was sent to the theater. It was always filled out showing zero hours of use and no new lamps installed.

I just discovered the King Cat sign is in a building kitty corner from where it was. Very cool!

Where is Kitty Corner?