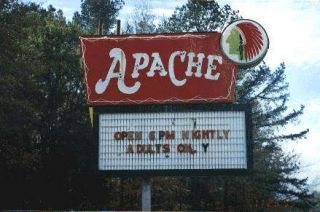 Ran across this report on a blog…

I also added six photos I found in Lost Memory´s post made back in 2004. The photos seem to be from 2001. That post has a long article about this place, from which I may post some excerpts.

I thought this passage may be of interest to our readers:

On entering the lot, I saw the dimmest picture I had ever seen on a drive-in screen.

Parking in the third row from the screen, I got out of the car to investigate. I kept wondering “Why is the picture so dim?”. The ambient light level was so low that I had difficulty making out the shapes of the cars parked around me.

I searched the projection booth and the concession stand for the tell-tale light of a projector. Nothing. I just couldn’t see it. One remote possibility came to mind. The screen of the Apache sits up on a dirt hill most likely created during the clearing of the lot and the construction of the berms. Perhaps a dozen feet in front of the screen sits a small enclosure.

The day I was there before, I didn’t have time to scale the hill to investigate the purpose of the enclosure. Looking into it at night confirmed what I now suspected. The enclosure must house a projection TV unit. I could see a variety of green status lights inside the enclosure. That fact, coupled with the lack of light from the projection booth made a remote projector the only possibility that made sense.

My new husband introduced this theater to me. I am very interested and curious now. I honestly thought I would never find anyone that shared the same twist thoughts that he and I share. I am saddened to see that no one has made a comment on here in years. A recent experience that we encountered there together had made me realize what my husband meant when he said I was a rare and unique woman. Heck I ain’t no typical woman. I must say that some of the staff has made me feel so comfy there and others made me question. However I did need to question my self at that point in time. One staff member that my hubby just went on about how they made him so comfy was me reason to try it out. It took a couple times going to finally meet that staff member and hubby was right, for once…LOL Just kidding. I have learned alot by watching and talking with others and hope to go again soon. I am disappointed that with today being New Years Day that yall are not open or just don’t answer your phone and thats fine. I am just limited on my available time due to hubby’s work schedule. If I could I’d be there every night just because I now know I am not alone and I am not a freak of nature with my sexuality and sexual thoughts. Thanks To The Owners For Having This Awesome Theater For People Like Me!!!!!!!!!!!!!!!!!

If there’s anyone attending this Friday night Jan 25th, please let us know as my wife and I are going to be at the drive-in for the first time and would love to meet as many people there as possible.

Jnbindallastx1: A fellow who calls himself Dr. Lizardo (as in the Buckaroo Banzai character) or just Doc for short has a blog you will be interested in as it covers adult theatres and related places which allow “play.” Also, from the home page there is a link to a database he maintain. If the link fails just Google Lizardo adult and follow links to blogspot.