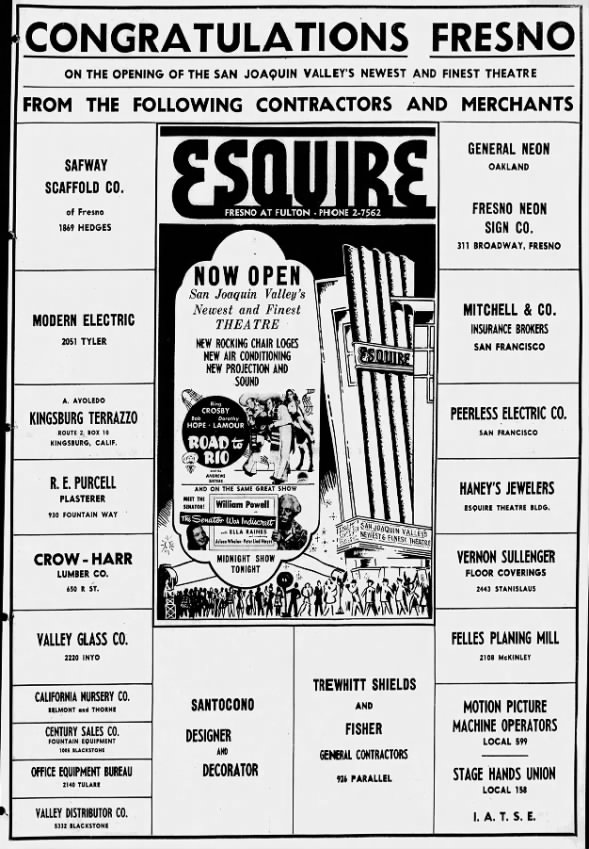 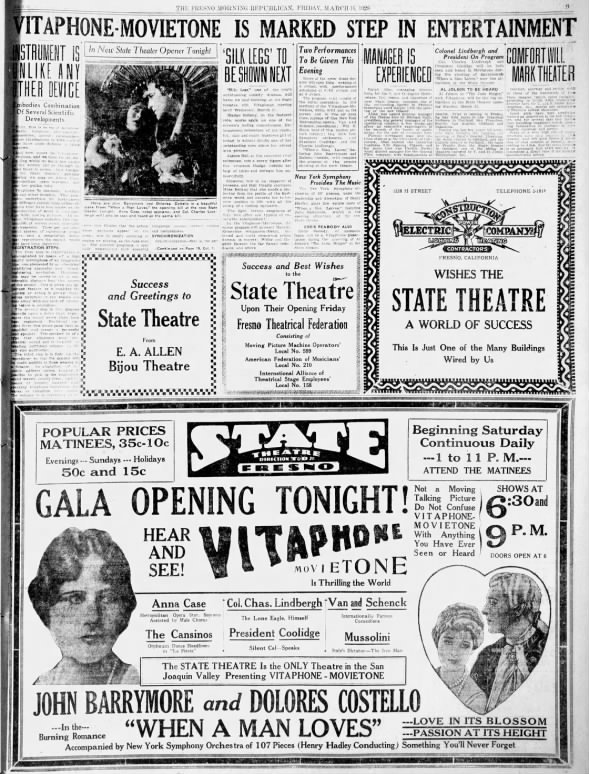 For example, I clearly remember seeing several Sophia Loren-Marcello Mastroianni comedies there. To my memory, the theater was still showing foreign films when I moved away in September 1969.

In its day as the Sequoia, the theater was strictly first-run venue. The multi Oscar-winning musical, “Gigi,” had its first Fresno run there – as did “Bye, Bye Birdie,” “The Time Machine,” and “Viva, Las Vegas.” It had a large orchestra seating section, with three or four steps up to mezzanine seating.

A photo of the new facade of the Esquire Theatre, recently remodeled for Robert Lippert, can be seen on this page of Boxoffice, May 22, 1948.

Thank you very much C Walczak. I was beginning to think I was going crazy.

It is listed here on CT as the International Theatre: /theaters/5117/

Does anyone remember a house called, I think, the Fine Arts? I don’t think it was a very attractive house and was told it had once been an army theatre. It may have even been a quonset hut; I just really can’t recall. I was sent there a couple times by Mr. Tate of Walnut Properties when I was installing the 35mm equipment at the Pussycat at 56 N. Van Ness Ave. back in 1983 (the Pussycat is now closed). The memory of the place that I think was called the Fine Arts is very, very dim. In fact, I can’t even remember if it was a porn house or not. Can someone help me out?

Bill Korenbratt who managed Warnorâ€™s at time also managed this theatre. He was an interesting man with a strong personality. He did not allow female employees to wear pants into work, even though they would be changing into their theatre uniform.

The Fresno premiere of â€œOliverâ€ took place at this theatre as well as â€œThe Lion In Winter.â€ Canâ€™t imagine how many times I must have stood through these films; I memorized all the lines.

It was mostly a second run theatre though, with titles like â€œGuess Whoâ€™s Coming To Dinner,â€ â€œApril Fools,â€ and â€œTo Sir With Love.â€

This was the Sequoia in 1963. It was then part of the Hardy Theater chain.

Photo of the Hippodrome:

The Barton Opera House became known as the Hippodrome and showed silent films. A small 4-rank 2 manual piano console Wurlitzer (opus 315)was installed. This organ was transfered to the White Theatre on Broadway (near the Hotel Fresno) and was installed in the same manner it had been at the Barton/Hippodrome—in a stand-alone swellbox backstage. Hayes McClaran removed the organ prior to the demolition of the White. The instrument is now owned by a collector in the Bay Area.

The State/Sequoia style 210, 2-manual 9-rank Wurlitzer was installed when the new theatre opened in 1928. The organ remained in the theatre until the late 1940s or early 1950s. KMJ Radio 580 bought the organ to install in their studios (where the Fresno Metropolitan Museum resides now). KMJ staff organist, Jerry Higgenbotham wanted a better instrument than the studio Hammond. (Jerry was a superb organist!) The installation of the State/Sequoia organ never took place and was sold to Bay Area organ builder Bob Kates who installed it in his home studio. The organ remained here for a few years until Bob sold it to Carsten Henningsen for his Ye Olde Pizza Joynt in San Lorenzo, CA in the early 1960s. (See Gary Parks entry above.)

The organ from the Fox State later spent many years—the 1960s through the 1990s and a little bit into the new millenium—in Ye Olde Pizza Joynt in San Lorenzo, California. For many years, organist Bill Langford held fourth here, and was suceeded by Jerry Nagano and others. At the Pizza Joynt, the Fox State organ was played with the console from the Warfield Theatre, San Francisco. Sadly, a fire a couple of years ago closed the restaurant and destroyed the organ console. The pipes were largely spared, from what I’ve heard. I do not know what has become of the organ since then.

Yes, the building that became the Sequoia Theatre first opened in 1890 as The Barton Opera House. This according to the book “Vintage Fresno”. In between the Opera House and The sequoia, the theatre had several names: Theatre Fresno and The Hippodrome, among them.