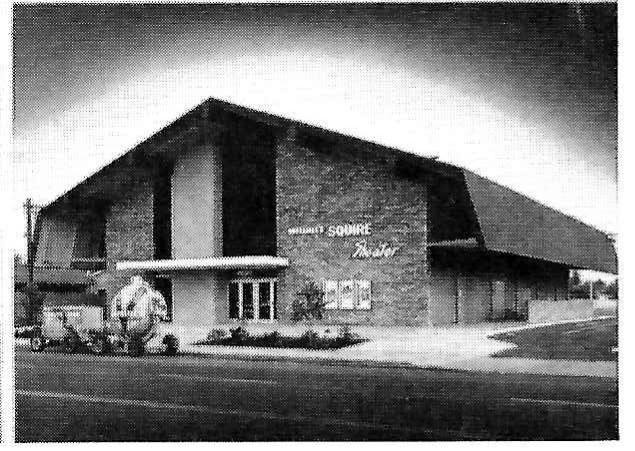 This was the first indoor motion picture theater opened in my Northeast Fresno neighborhood. Its premier attraction on October 13, 1965 was the undistinguished “The Man From Button Willow” starring Dale Robertson. It went on to become a wonderful first-run house.

“Thoroughly Modern Millie” and “The Sound of Music” both had their Fresno premieres at the Squire Theatre. I remember Blake Edwards “The Great Race”, “Oliver!”, and other first-rate motion pictures there, too. This 1960’s Moderne-style theater featured Continental seating, which meant no center aisles.

The last motion picture that I remember seeing at the Country Squire Theater was the Allan Carr 1970’s musical “Can’t Stop The Music”. I was living in Hollywood at the time and in Fresno visiting my parents.

I also remember seeing “Those Magnificent Men In Their Flying Machines” there. And “Dr. Zhivago,” “Far From The Madding Crowd,” too. I think Bill Korenbrott who managed Fresno’s Warner Theatre may have owned the Country Squire. But of this, I am unsure.

â€œThe Sound of Musicâ€ and â€œDoctor Zhivagoâ€ had Fresno premieres at the Warnorâ€™s Theatre in 70mm and â€œOliverâ€ opened at the Towne Cinema (formerly Sequoia) both downtown theatres.
I remember viewing â€œRyanâ€™s Daughterâ€ (70mm), â€œNicholas and Alexandraâ€ and â€œThoroughly Modern Millieâ€ at the Country Squire. â€œJawsâ€ played to packed houses for months. The theatre had a huge screen and great sound.
At one time the Warnorâ€™s, Hardyâ€™s, Towne Cinema and Country Squire were operated by Trans-Beacon Theatres.

Today, I drove by where the Country Squire previously stood and sadly it’s been demolished. While the inside of the theatre wasn’t that special the outside had charm.

This theater was originally called simply the Squire Theatre, though a facade sign read “Shellmel’s Squire Theatre.” Boxoffice of October 11, 1965, said the Squire was scheduled to open on October 13. It was Fresno’s first new theater in 20 years, Boxoffice said. They must have meant indoor theater. I’m pretty sure drive-ins had been built in Fresno during that period.

By 1968 it had been renamed the Country Squire Theatre, and was being operated by Trans-Beacon Theatres, according to Boxoffice of February 19. Simon Korenbrot was noted as owner and builder of the theater in the 1965 item, and in the 1968 item William Korenbrot was mentioned as head of Trans-Beacon.

A photo of the Squire was featured as the frontispiece of the Modern Theatre section of Boxoffice, December 13, 1965.

Doubtful that RYAN’S DAUGHTER played in 70mm at the Country Squire Theatre. According to Boxoffice Magazine, the theatre was equipped with Norelco FP20’s, which was a 35mm only projector.

Here is an updated link to the 1965 photo of the Squire Theatre in Boxoffice.

Because I lived less than one-half mile from the Country Squire Theatre, I remember its construction, and my delight with having a brand, spanking new movie theater in my very own ‘hood.

The Country Square theatre opened with “The Man from Button Willow” on October 13th, 1965. Grand opening ad in the photo section. It was opened by Shellmel’s theatres.