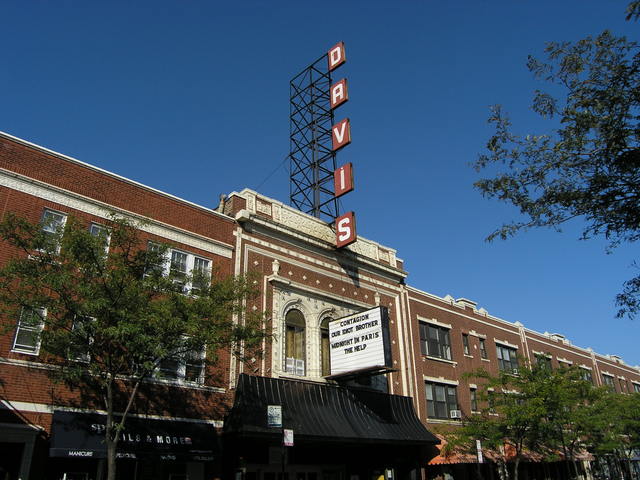 Opened November 6, 1918 for the Lubliner & Trinz circuit as the Pershing Theater in the Lincoln Square neighborhood, then a predominantly German-American area of Chicago.

It originally showed first-run films, but by the 1930’s was also screening German-language films, which it continued to do into the early-1960’s, when it became a second-run house. It once sat up to 1,500 patrons in its main auditorium, but in the 1980’s, the Davis Theater was divided into four screens.

After many years of neglect, the Davis Theater was recently refurbished and its stained-glass windows, antique movie posters in the lobby, and old-fashioned vending equipment were retained.

One of its four auditoriums was given over to art and foreign films, and this small auditorium is now called the Davis Art. When threatened a couple years ago with demolition for replacement by a condominium, residents of the neighborhood surrounding the beloved Davis Theater were outraged and protested against the plans vigorously, and the theater was saved. It was closed for refurbishment in January 2016 and reopened December 15, 2016 with 3-screens, one seating 300 and two each seating 135.

August 29th, 1930 grand opening ad for the Byrd, Davis and the Lamar in Oak Park theatres in the photo section.

Reopening tomorrow (12/15) with Rogue One. Long story with plenty of pictures here.

Link to a recent article about the Davis Theatre: https://www.dnainfo.com/chicago/20150623/lincoln-square/davis-set-for-4m-upgrade-adding-restaurant-mod-vintage-touches

This theatre now has THREE auditoriums.

I didn’t realize they had opened up the front of the auditorium until viewing RickB’s article. It looks like they did a fantastic job.

My only nitpick is the smaller auditoriums in back. I never liked the look of a split vintage auditorium when they were all twinned back in the day, and I still don’t today. If it were my project I think I would have fitted out the back cinemas with drop ceilings and modern wall coverings.

But that shouldn’t be taken as negative commentary. It looks like they did an amazing renovation.

Below is a link to the Facebook page for Right Way Signs of Chicago. There are 11 photos of new interior signage they created for the theater aisle designations and the Carbon Arc Bar & Board.

November 20, 2018 article with older photos. I’ll post the photos with credit as well, in case the link goes dead.

Tom Fencl, owner of the Davis has died of lung cancer. A nice article about his work with the theatre can be found here: https://blockclubchicago.org/2020/04/08/tom-fencl-beloved-owner-of-davis-theater-dies-after-battle-with-lung-cancer/