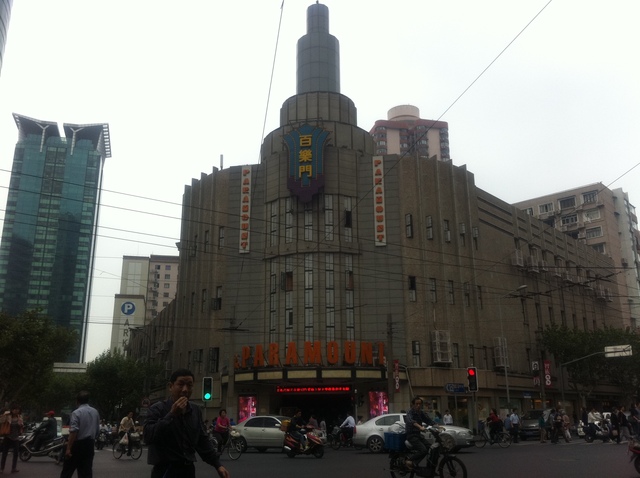 According to a short item in the weekly travel section of The New York Times, the newly reopened Paramount Ballroom is “An Art Deco marvel with wild neon lights, offering ballroom dancing and an atmosphere that is a throwback to the 1930’s”. Elsewhere, I found that the building is the work of Chinese architect Yang Ximiao.

The Paramount Ballroom opened on 14th December 1933. After WWII, the Communist government took control and opened a small 300-seat Hongdu (Red Capital) Cinema in the building. By the 1990’s, the decaying building seemed destined for demolition, but it was finally purchased by Taiwanese entrepeneur Zhao Shichong, who has been restoring it to its former glory.

I think it was a mistake.

The Paramount Ballroom opened on 14th December,1933,and the ballroom building did not had a cinema.

An interesting old tourist guide book from Shanghai (http://www.talesofoldchina.com/library/allaboutshanghai/t-all08.htm) from 1934, does not list the Paramount as cinema:

“THEATRES
For its theatrical entertainment Shanghai is largely dependent on motion pictures and there are a number of first class cinema houses showing the best of the American, British, German, French and Chinese productions. They are all equipped for sound.
Excellent stage plays are produced at frequent intervals by local associations of amateurs, and touring companies are occasionally here for limited engagements. But in the main going to the theatre in Shanghai means going to the "talkies."
Among the first class cinemas are:
Carlton – 2 Park Road
Cathay – 868 Avenue Joffre
Embassy – 742 Bubbling Well Road
Grand – 216 Bubbling Well Road
Lyceum – Rtes. Bourgeat and Cardinal Mercier
Metropol – 500 Thibet Road
Nanking – 523 Avenue Edward VII
Strand – 586 Ningpo Road”

Here are some recent pictures I took of the Paramount.
View link

Although it looks very like a purpose built cinema from the outside, the Paramount was indeed built as a ballroom initially.