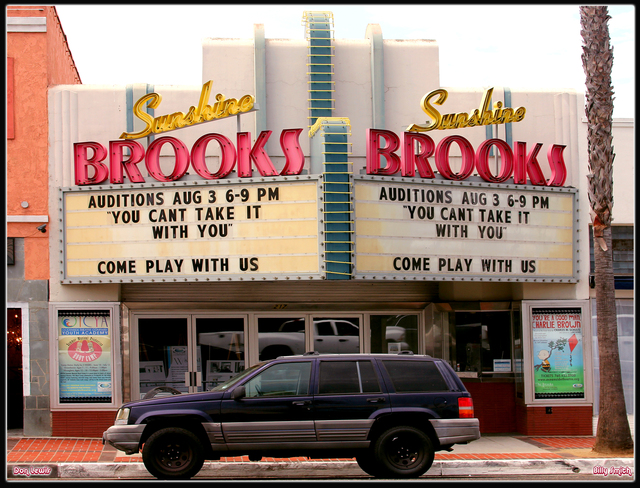 This opened as the 659 seat Margo Theater on 20th November 1936, the owners were F.E. Chaldek, C.A. Shaeffer and J.A. Dundas. A month after opening Mr Chaldek sold his interest in the Margo and it came under the sole ownership of Mr Shaeffer, with Mr Dundas continuing as manager.

In the 1980’s the name was changed to the Towne Theater and it began screening ‘adult’ movies, operated by the Pussycat Theatres chain, before eventually closing, after which it became a karate studio.

The building was acquired by the city in 2001 and was renovated at a cost of $1.5m and converted into a live performance theatre.

It was named after Hattie ‘Sunshine’ Brooks, who donated her majority interest in the building to the city.

Street names appear to have changed in Oceanside since the 1930s, but there were two theaters planned for that city in 1936. One, for a company called Palomar Operating Company, was to be located on Hill Street between Temple and Michigan.

The other, to be built for Inter-Counties Investment Company, of Anaheim, was in a remodeled building at Hill and Third Streets.

Both theaters were to be designed by Clifford A. Balch, with engineer Floyd E. Stanbery.

You are correct regarding street name changes in Oceanside. What is now North Coast Highway was North Hill Street back in the 1930’s and up to the 1950’s at least.

The Film Daily Yearbook 1952 lists an 640 seat Palomar Theatre, located at 314 N. Hill Street. While in Oceanside earlier this year I went looking for the Palomar, but it has been demolished.

The other building you mention being remodeled at Hill and Third Streets is the Margo Theatre (now the Sunshine Brooks Theater). So the architects can now be confirmed as Balch & Stanbery.
Thanks.

There are a few recent photos of the Sunshine Brooks here:
http://www.cinematour.com/tour/us/16646.html

Upon doing some research at the Carlsbad Library, I found a book on Oceanside which mentions the Margo (Or Sunshine Brooks Theater). It says that it was originally named for Rancho Santa Margarita but that name was far too long for a marquee so they shortened it to The Margo Theatre. In the 1950’s the name was changed to The Towne Theatre.

Had fine old trough-style urinals in the mens' room. You don’t see those much any more.