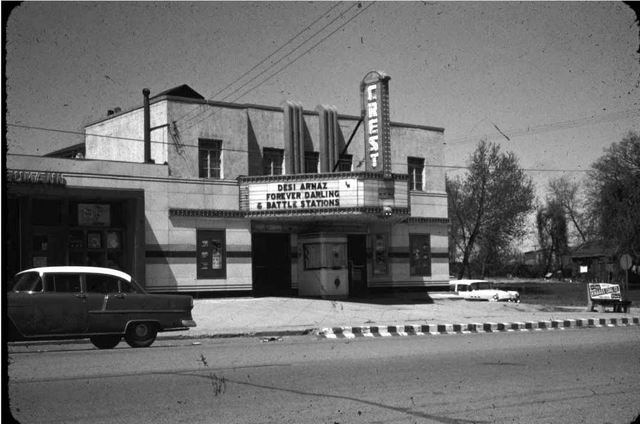 The Crest Theatre was opened in 1939. It was designed by local architect J. Fletcher Lankton in a Streamline Moderne/Art Deco style. It was operated by Springfield based Kerasotes Theatres and the Crest Theatre was similar to their Beverly Theatre and Varsity Theatre, both in Peoria, IL and the Esquire Theatre in Springfield, IL.

The Crest Theatre was closed around 1969 and it was converted into Kimberly’s Furniture store which operated a short time. It was demolished and Sandy’s/Hardee’s Restaurant was built on the site. This too has since been demolished and the site is now occupied by a gas station.

But you DO have a picture of the Crest on a separate site! I grew up in Peoria and attended the Crest many times. It opened, I think, in 1939, was are deco, seated 500-600 I would estimate, and closed sometime before 1960. It was demolished and replaced with an undistinguished business building.

Check out this photo:

I grew up near the Crest, although it was closed and sat vacant for much of my childhood. Reset your Google Satellite map image to approx. 4419 No. Prospect Road, Peoria Heights. It currently shows a parking lot with a set of greenhouses…THAT is where the Crest was located. Perhaps the numerical address you have on file for the Crest is what this location was listed as, back when the Crest was open? In the early 1970s, Peoria Heights renumbered it’s streets to correspond with neighboring Peoria.

As for what the site became, after the Crest was demolished either in the late ‘60s or early '70s, some failed franchise restaurants were built thereon. The first attempt was a Minnie Pearl’s Fried Chicken, that was built with signage included…but I do not recall that it ever opened. Later it became a Famous Recipe Fried Chicken…also a Hardee’s…all since demolished…and now a parking lot for a florist/greenhouse: Height’s Flowers.

As a child in the 1940s and 50s I lived at the North end of Dayton Ave, within walking distance of the Crest (less than half a mile). I moved before any changes happened. Back in the day it was very stylish, not as majestic as the theaters in downtown Peoria, such as the Madison. Hardly ever missed a Saturday matinee, hooked on the serials (nowadays they’re called sequels, but are longer and don’t run the next week.), comics and newsreels. I remember begging my folks to buy one of those new things called television sets, saying we could save money ‘cause we could watch shows at home… We did get a tv in 1953, but still went to the movies. Saturday at the movies has always been a priority for me, takes me back to my childhood. The Crest was a wonderful theater.