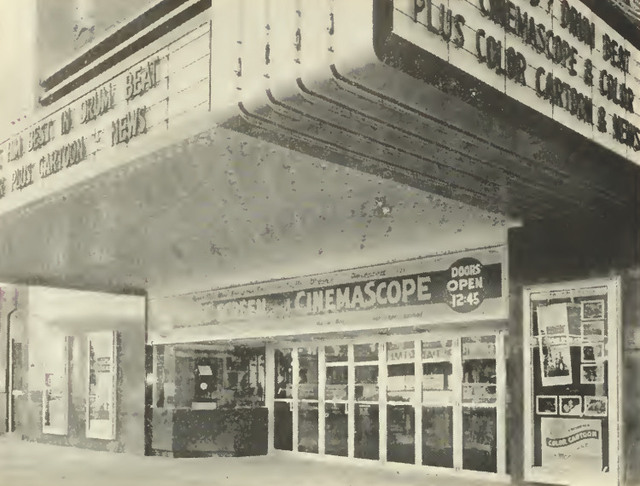 The Capitol Theatre was built for the Hostettler Amusement Co. a subsidiary of Universal Chain Theatrical Enterprises Inc. Opened March 24, 1927 with Laura La Plant in “The Love Thrill”. It was equipped with a Wurlitzer theatre organ which was opened by organist Guy Morse. By the early-1940’s it was operated by Paramount Pictures Inc. through their subsidiary A.H. Blank. In 1972 it was taken over by the Dubinsky Brothers. It was closed on January 6, 1985 then demolished the following year.

“The Capitol was razed in 1986 to make room for a parking lot.” Even in NE this happens!! Maybe ‘lostmemory’ can supply CT with a photo(s) of this former theatre!

As an educated guess, the Capitol could conceivably have been similar in interior style to the Riviera (which is now the Rose Blumkin Performing Arts Center) in Omaha, as they both were designed in Eberson’s Moorish-hodgepodge style, and the opening dates for the two theaters are only two days apart (the Riviera opened on March 26, 1927)!

Actually, the only things the Capital had in common with the Omaha Riviera were they were both Eberson designs and atmospheric. The Capitol was very plain for Eberson. The procenium design was rather Moorish and the organ screens were quite similar to those Eberson used in the State Theatre, Kalamazoo, MI. Aside from that, the theatre had little architectural design at all. I photographed the theatre in 1977 when I saw “Saturday Night Fever” there. It was in pretty good shape aside from being stripped of it folage and wildlife. I also have a few original photos which show the trees, etc. which were pretty much all the decoration used in this theatre. This was Eberson on a very low budget. The theatre also had no lobby to speak of.

CORRECTION TO MY POST OF JUL 10, 2007.
The organ screens in the Capitol were very similar to those used by Eberson in the Detroit Annex Theatre, not those in the Kalamazoo theatre.

I grew up going to this theater! Lived in Grand Island from 1968 to 1980…saw crazy classics…THE GODFATHER (I was a child and slept thru it) and JAWS (hid under my seat) and HALLOWEEN (life changing) and so many others. I’ve now lived in Los Angeles and New York City. The Capitol always seemed so huge as a kid but I figured it was probably just a skewed memory because everything seems huge when you’re a kid. Seeing that it had 1,200 seats…more than most Broadway theaters…blew my mind. It really was HUGE!

The Capitol Theatre launched with Laura La Plante in “The Love Thrill” on March 24, 1927. The real star of opening night, according to reports, was the Mighty Wurlitzer organ, which had its effects in the left arch and the music in the right arch. Two Jones Grand pianos were also in the orchestra pit with seven live performers.

In February of 1928, the venue was equipped with both Movietone and Vitaphone sound systems. Universal presented the World Premiere of “Melody of Love” and at the Capitol on September 24, 1928. Over the years, stars including Barbara Stanwyck, Lillian Gish and magician Harry Blackstone would appear on the Capitol stage. Its Spanish courtyard atmospheric design would eventually be updated and its Wurlitzer would be jettisoned in 1965 and sent to Colorado Springs. Dubinsky Brothers Circuit took on the venue in 1972 and closed the location on January 6, 1985. The terra cotta, wrought iron and archways were among the elements sold at salvage prior to the theater’s demolition.