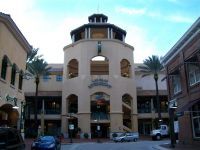 It featured 15 state of the art stadium style seating auditoriums. The Las Olas played great art, foreign and independent as well as the latest blockbuster films. In 2011, four screens were closed, leaving eleven operating. In 2013, the Las Olas Cinemas was totally closed and was demolished in 2017.

Theater update: www.youtube.com/watch?v=_sq1xQ429t4 Everything still seems to be in place despite being abandoned for almost two years.

I was at the grand opening Rivest. What a shame it never took off.

Thanks, Rivest. But how did you get a pic posted on CT comments and not the photos section? And can those without Newspapers.com membership see it?

You can see the page. When I clipped the page, there was an option to embed the ad at newspapers.com.

Stopped by on July 26 and noticed work was going on inside the building. Is the building being renovated into something else or to be torn down?

With all the condos that have been built there is no reason this theater shouldn’t have taken off. Unfortunately except for Dan Marino’s Town Tavern the whole complex in general was a flop

I saw The Great Gatsby at Las Olas in 2013. I think it closed shortly after that. The film presentation was good. Properly masked, but the bulb was a little dim and the sound was off. This multiplex reminded my of a picture palace in the 1970’s that had fallen on hard times. Areas sat dark and unused. It seemed to be dim and cavernous. There was a boarded over concession stand on the upper level. I am not a multiplex person but liked this one. An odd aura about the place. Sad to see it go.

The page for this cinema on the Abandoned Florida website, that includes a variety of photos, says the cinema and the entire complex of which it was a part was demolished in 2017:

“The complex sat empty until 2017, when the property was bought by a developer for $29 million. Later that same year, it was demolished to make way for two high-rise residential towers, standing at 42 and 38 stories tall. The towers will have over 40,000 square feet of shops and restaurants on the lower levels, and 1,200 one and two bedroom apartments. The first phase of the project is planned to be completed by 2021.”

In 2007, the final film I saw at what I knew as the Las Olas Riverfront Cinemas was “The King of Kong: A Fistful of Quarters”, a documentary about men competing to achieve the world record high score on the classic video arcade game Donkey Kong. : )