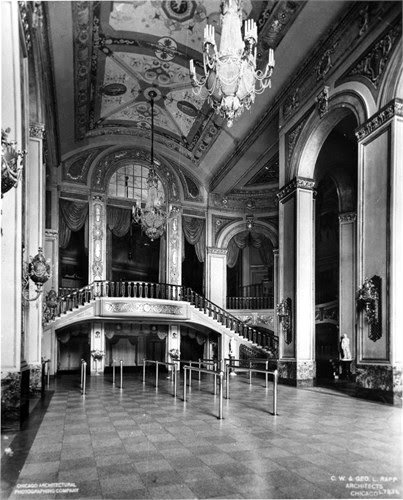 Opened June 17, 1926 with Esther Ralston in “The Blind Goddess”. It was built for the Lubliner & Trinz circuit but was operated by Balaban & Katz. The palatial Norshore Theatre seated 3,017. The theatre was located in the Rogers Park neighborhood. Its outer lobby featured huge crystal chandeliers and the ceiling was decorated with Pompeiian motifs. The theatre also contained fine French antiques and was equipped with a Wurlitzer theatre pipe organ which was opened by organist Chauncey Haines. Seating was provided on the orchestra level, and on a very shallow mezzanine level.

The Norshore Theatre was closed in 1957, and in 1960, this amazing theatre was reduced to rubble. An office building, was later built in its place and this too has since been demolished.

My grandfather Howard Ure Sr. owned “The Ship” restaurant. My great grandfather built and owned the Norshore Theatre and it was attached to the restaurant. The restaurant was originally called “The Grill” and after my grandfather bought it, he expanded the restaurant and added a package liquor store next to it some years later. He changed the name to Howard Ure’s “The Ship” restaurant. I believe the restaurant opened in 1926 or earlier. My dad Howard Ure Jr. whom is still alive and well, use to help out in the restaurant when he was a young boy. The actor Charlton Heston use to stop into The Ship, when he was going to Northwestern at the time. And you were correct, Howard Street was named after my grandfather by my great grandfather. Originally my great,great grandfather John C. Calder Ure had a farm and land which is part of Rogers park now today. He gave his son, my great grandfather a section of land to run his dairy farm which was the J.F. Ure dairy. My great grandfather then donated part of his land to the city to build roads and other means of transportation through Rogers Park and beyond. The city decided that he could name the road and he named it after his first born son Howard. Although he was originally going to call the street “Ure” street. He then thought that the Scottish last name would not be easy to pronounce, so it became Howard instead. Lots of great family history. I hope this info was helpful.

You really do run into interesting people when you have an interest in Chicago history! Thanks for posting, Mr. Ure.

RickB- I never answered your original question on “The Ship” restaurant. It was a steak & seafood restaurant.

I went to grammar school with Mary Ure. We went to the restaurant and then to the movie. I thought that was amazing. What more could an 8th grader want? Don’t know what relative she was of yours but we graduated from grammar school in 1945. Doris O'Connor Strickland