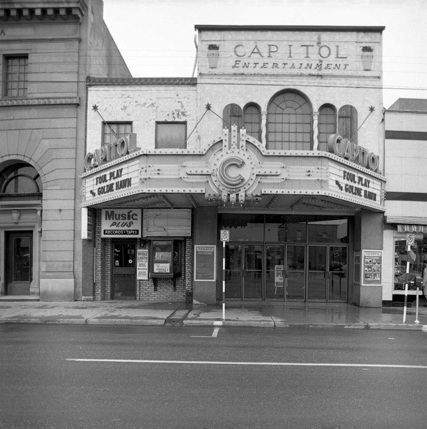 The Capitol Theatre opened on May 11, 1929 with Charles ‘Buddy’ Rogers in “Close Harmony. It was sesigned in an Atmospheric/Spanish Renaissance style and had 1,600 seats. It was demolished in 1979.

Hey all…been a while since I was on this site…some really good pix of the demolition…and yes, it made my stomach churn to see that gaping hole again…I am glad to hear the marquee is being restored…I cant wait to see the results…I was concerned about its whereabouts after I went to the compound where it was and it was missing! I am glad it is in good hands…I hope Midwest is keeping lots of photos of the process. I agree with Elissa, I would love to go on a mission to see the Capitol artifacts in the Cook Bldg…I think the city is still embarassed at the brutal job of not keeping the Capitol theater alive….I still consider it to be a major loss to the city’s history. If anyone wants to chat about it email me at

How ironic. I worked for Ken Achs and am aware of his Capitol Theater work. A friend gave me 6 Capitol Theater seats “to get rid of” and I did a web search. I have joined this group. I attended the last event at the Capitol in ‘79. It was Sneezy Waters playing Hank Williams in “The Show Hank Never Gave.” It was awesome, but most amazing was the theater. The screen was gone and everyone realized that this was once, and for one last time, a theater, not just a cinema. So, what to do with the seats? Suggestions? Do you have pictures? They are in great shape and they have stories to tell. My email is

There were actually 2 Capitol Theatres. In the 1980s after the original was torn down they built the Capitol 4 a block to the south on 1st Avenue. It operated until the early 2000s when the Galaxy opened and they decided they only needed one downtown theatre.

^ Expanding on my comment, the Capitol 4 is listed separately under its final name, Empire. Surprised at how little is in the main write up for this theatre which was Calgary’s premiere movie house and when it was closed and demolished in the early 1980s to make way for the Scotia Centre there was huge controversy. This was a beautiful theatre. I remember hearing that many of the seats were salvaged and installed in Castle Theatre, a live theatre venue at Aden Bowman Collegiate.

Some more memories: I remember that the theatre’s entrance was on 2nd Avenue, but that was just the lobby. You then followed a “bridge” over the alley behind and this took you into the actual theatre building. After the show, you had the option of exiting to 1st Avenue or backtracking to 2nd. There was balcony seating, and this was the only theater where I remember experiencing an “overture” where they played music as people entered that was actually part of the film. Wish I could remember the titles of all the movies I saw here. I recall seeing a re-release of The Jungle Book in the mid-70s, and (of all things) the Lee Majors B-movie The Norseman in 1978 or so. Possibly The Black Hole, too (which might be where my overture memory comes from).

The “Better Theatres” section of the July 5, 1930, issue of Exhibitors Herald World featured an article about recent Canadian theaters which included a few paragraphs about the Capitol at Saskatoon:

“Turning to the Canadian West for another example, the new Capitol theatre in Saskatoon, Sask., has a stage no less than 80 feet wide and proportionate in depth. It was built for talking pictures and has thick carpets to deaden the sound of tramping feet, but it has that big stage for come what may.

“The Saskatoon Capitol, designed by Murray Brown of Toronto, an outstanding Canadian theatre architect, is of the average size of 1,600 seats — 1,400 on what was once known as the orchestra floor, and 200 somewhat more luxurious chairs on a narrow balcony just under the glass-covered portholes of the projection room.

“The Capitol at Saskatoon has a Spanish interior with Spanish lounges, Spanish garden walls and blue sky overhead. It was the first atmospheric theatre in the ‘prairie provinces’ of the Dominion and created plenty of talk when Manager Frank Miley, local veteran showman, opened the doors. Miley had his first ‘opening’ at the old Daylight theatre in Saskatoon back in 1911 and this latest theatre creation is rated as a $400,000 enterprise.

“The incidental Spanish furnishings and wrought iron lamps in the new Capitol cost more than the first theatre. And you can walk around in different luxurious places in the Capitol, whereas the old Daylight just had seats, a projection "booth,” a screen and a few other essentials. The new Capitol has spotlights emitting their beams of light through the edge of the balcony when desired and the atmospheric skyline is considered worthy of the price of admission alone. The lofty entrance leads one up over a hidden intervening alley, away from the main street, until one enters the theatre proper beyond. This long lobby helps to absorb the crowds.“this illustration depicts the Capitol Theatre’s auditorium. The entire article can be read online using this link. It features additional photos of the Capitol.

Not sure why I called the Capitol “Calgary’s premiere movie house” earlier.Weird typo!