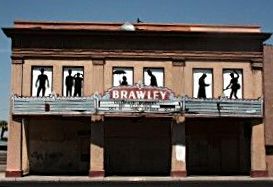 Opened as the Belvedere Theatre on March 22, 1922 with 815 seats. In 1929 it was taken over by Principle Theatres and renamed Brawley Theatre. It is a two story building with what I assume at one time had a balcony since there are doors on each side of the upper floor. The theatre looks to have been closed for some time.

On the second story of the front facade what looks to have been windows have been painted over with black silouetts painted on each window. The lower floor which was once the entrance has been boarded in and painted a cream color paint and at the time I took my pictures there was a lot of grafitti over the front. The v shaped marquee is still there but a few holes in the glass panels in several places.

THE BRAWLEY THEATER CLOSED DOWN IN OCTOBER OF 1979 DUE TO AN EARTHQUAKE MEASURING 6.1. THE NNW WALL OF THE THEATER COLLAPSED DUE TO THE QUAKE. THERE WAS A BALCONY LEVEL STILL AT THE TIME MY FRIENDS AND I ENTERD THE THEATER ILLEGALLY BACK IN 1988/89. WE FOUND A BUNCH OF OLD COKE BOTTLES AND A COUPLE OF VERY LARGE HORN TWEETERS ON THE STAGE AND THE SEETS WERE NO LONGER THERE. MY MOTHER REMEMBERS VISITING THE THEATER BEFORE IT CLOSED. I WILL CALL HER TONIGHT TO FIND OUT WHAT SHE REMEMBERS ABOUT IT.
DO YOU HAVE ANY INFORMATION ON THE BRAWLEY DRIVE IN THAT CLOSED DOWN??

My email is If you would like memories or a copy of pictures please email me.

This is part of a January 19, 1936 LA Times article. The theater is unidentified, but the reasonable assumption is that it’s the Brawley.

The Ford coupe stolen on Thursday by two roughly dressed men who kidnaped Carl Gelvin from the rear of his home and left him tied to a fence post in a lonely spot between Castaic and Peru, was used Friday night in a theater hold-up in Brawley, the Sheriff’s office was advised last night.

Two men held up the theater at the point of revolvers and escaped with an undetermined amount of money in the coupe. The car was later seen in Holtville and Imperial.

I’ve dug up information on three theaters in Brawley other than the Brawley itself. There was a Eureka Theatre, in operation by 1937, owned by Ben Aranda. There was an Azteca (or Aztec- it appears under both names in different issues of Boxoffice) opened by Aranda in 1937. Then there was another theater opened in 1937 called the Circle, which, like the Brawley, was operated by Fox West Coast. I don’t have addresses for any of them though.

The Brawley itself got a renovation in 1976, and reopened on May 26 with “Cabaret” as the first attraction, according to June 11 issue of Boxoffice that year. By then it was operated by Great Western Theatres, seating had been reduced to 650, and it was apparently the only house still open in Brawley.

I was born in Brawley in 1967 and grew up there. I attended bottle-cap matinees at the Brawley Theater. I recall seeing Orca and It’s a Mad Mad Mad Mad World. The theater has never been reopened, and a silly spruce-up of a facade didn’t hide the blight that has now spread over much of the town. It’s a very depressing place. My dad grew up there and has stories about the various movie houses, soda fountains, clothing shops, etc. No such vitality and initiative these days. I found an interesting story about the theater when it played Deep Throat.
View link

Perhaps the first movie house in Brawley was the one mentioned in El Centro’s newspaper, the Imperial Valley Press, on September 17, 1910:

“The Gilbo moving picture theatre, operated by I. J. and U. N. Gilbo, will be opened in Brawley next week. The theatre is located in the building erected by Peter Hovley.”

I’ve been unable to find out anything else about the theater.

The Brawley Community Foundation is attempting to restore this theater. The front of the theater has already been restored and relighted, as seen in this news item from The Desert Review of May 17, 2013. The house has been renamed the Brawley Playhouse Theatre.

The theater’s Facebook page has a brief history of the house. It opened on March 22, 1922, as the Belvedere Theatre, with 815 seats. When restored the house is to have up to 428 seats, a stage for theatrical and music productions, an orchestra pit, and movie screen.

The January 9, 1928, issue of The Film Daily said that S. U. Anderson, the original owner of the Belvedere Theatre in Brawley, had sold it to Principal Theatres. Princiapal had changed the name of the house to Brawley Theatre by 1929.

Just wondering if anybody remembers when JoAnn Brown worked at the Brawley Theatre…She was there from 1952 til about 1971.. First as a cashier, then asst. mgr. under Jim Cisler…under the Fox West Coast/ National General banner..