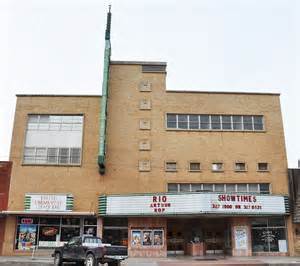 Built on the site of a previous Rialto Theatre (1927-1948). This theatre is spectacular! It’s in excellent shape! It plays first run movies and boasts two screens. Its huge balcony has been divided into the second screen.

When the current Rialto Cinema opened on August 21, 1949 with Gary Cooper in “It’s A Great Feeling”, it had a seating capacity for 600 people. Today, the main auditorium is still huge and features a working gold curtain. The picture and sound quality is excellent in the two auditoriums. This is truly a ‘grand’ theatre!

Here’s a “Grand” theatre that is worth the trip! It’s right in the heart of Alva, OK. For those of you who think it’s a long way to travel to go to a movie just go to Enid and you’re almost there. It’s worth it. Enid has lost all of its interesting theatres, so go to Alva.

Listed in the Film Daily Yearbook’s 1941 and 1943 editions as the Liberty Theatre. By the 1950 edition of F.D.Y. it has been re-named Rialto Theatre.

There’s some confusion about the theaters in Alva. Even the October 15, 1949, Boxoffice Magazine article about the new Rialto contains within itself some conflicting information.

One paragraph says that the first Rialto was a successor to the Liberty and was opened in “… an old, barn-like auditorium that also housed a grocery store and garage….” This is supposed to have taken place after the Liberty burned, which the article says happened on October 12, 1934. The item also says that the razing of the first Rialto began on July 5, 1948, and the new Rialto was then built on the same site (this part is probably accurate.)

However, another paragraph of the same article says that in 1928 Homer Jones “…purchased half interest in the Alva Theatre Company, which was operating the Liberty and Rialto.” A few lines later it says that Jones “…left the Liberty in 1931 to devote full time to the Rialto.”

So, was the first Rialto built in 1929, as the intro above says, or earlier, if the Alva Theater Company was operating it when Jones came to town in 1928 as Boxoffice says, or in 1934, after the Liberty burned, as Boxoffice says? Or did Jones actually operate three successive Rialtos in Alva?

Boxoffice doesn’t identify the source of its information for the 1949 article, but it contains so much detail about Jones’s career that he himself, or someone very close to him, must have been the original source. Most likely the copywriter garbled some of the information about the earlier Rialto, or Rialtos.

The various on-line sources of information about the Rialto and other Alva houses are sometimes not consistent with one another either. The Enid News item from 2008 says that Jones “…purchased the Rialto in 1929.” The OkieLegacy site’s item on the Jones family appears to have taken some of its information from the Boxoffice item I cited (using the first Boxoffice tale about the original Rialto but not their second tale), but also says that Jones owned another theater in Alva which burned in 1933.

Somebody will probably have to do some research in the archives of the area’s newspapers, in articles and ads from the period in which the various theaters were operating, in order to sort out the facts.

What is clear from the Boxoffice Item is that the new Rialto was operating by October, 1949, and that it had 800 seats. The 600 seat figure in the intro to this page must be for the original Rialto, though the seating capacity of the triplexed house of today might actually be pretty close to that if the auditorium had 800 seats on opening.

Whatever confusion there may be about the pre-1949 history of the Rialto name in Alva, Boxoffice of March 5, 1949, reveals that the architect of the new Rialto that opened that year was undoubtedly Jack Corgan. His rendering of the proposed building was published in that issue of Boxoffice, and it matches the photos.

New pictures of the Rialto in the photo section. The Rialto Video store, located next door, is also the theatre concession stand – I saw a couple folks go in just to buy soft drinks and popcorn! Apologies, accidentally loaded a Rialto photo in the Ranger Theater (Alva OK) page. Can an administrator for Cinema Treasures delete that picture?

The Rialto Theatre Opened On August 21, 1949 With Gary Cooper, Ronald Reagan, Dennis Morgan, Doris Day, Errol Flynn, Joan Crawford, And Jack Carson Among Others In “It’s A Great Feeling”, Along With A Fox Movietone Newsreel, A Merrie Melodies Cartoon: Tweety And Sylvester in “Bad Ol' Putty Tat”, and an MGM Cartoon: Droopy In “Wags To Riches”.

The original Rialto Theatre opened on April 25, 1927 with William Boyd in “The Yankee Clipper” on a 20-year lease. Three months after its 20th anniversary, the building but not the theater was damaged by a fire at the Rialto Cafe. The theatre had more screenings but was razed in July of 1948. In 1948 and 1949, a new building was constructed on the site of the Rialto by Homer C. Jones of Jones Amusement to the plans of architect Jack Corgan. The Rialto Theatre Opened On August 21, 1949 with Gary Cooper in “It’s A Great Feeling.“ The theatre had the state’s first air conditioned projection booth and an Otis elevator.