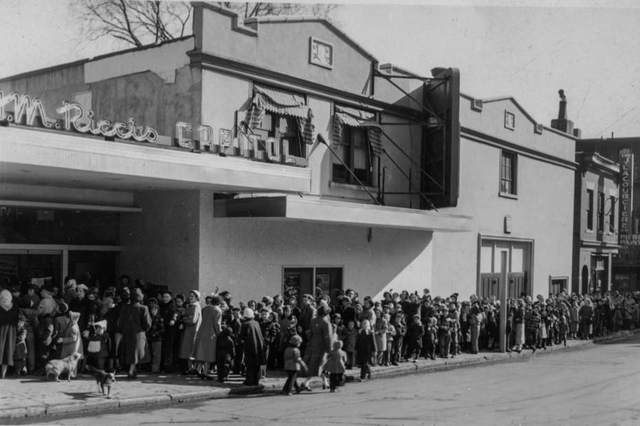 Opened as Ricci’s Theatre on December 25, 1913. On August 15, 1915 it went over to being a movie theatre, renamed Life Theatre. It was equipped for sound and reopened as Ricci Capitol Theatre on November 11, 1930. On April 1, 1964 it was renamed Capitol Theatre. From January 1971 to March 30, 1974 it went over to screening adult pornography movies. It ended its days playing family movies.

The Capitol Theater on Grove Street in Meriden was demolished in the late-1980’s to make way for a parking garage.

Well, if I may add a bit more, perhaps this will spur some additional memories from others. There was a balcony here, but in the 1960s and 70s, it was closed to the public. That didn’t seem to matter much, because people (like me) would always sneak up there with the hopes that the projectionist wouldn’t kick us out! There were persistent rumors that the balcony had been closed because of structural problems, but that rumor was never substantiated by anyone I met. My paternal grandmother, who lived to the ripe age of 101, used to tell me that the Capitol used to be called the “Life Theater” when she was a kid in the early 1920s. I never bothered to look that up. Some fellow with the last name of “Ricci” owned the Capitol, and also later owned the Meriden Theater on Broad Street in Meriden, CT. In fact, Ricci put his name on the Capitol’s neon marquee: “Ricci’s Capitol.”

Here’s some Double features IN THE ORDER THEY PLAYED,March 24,1970

“SCREAM,SCREAM AGAIN"
"DESTRORY ALL MONSTERS"
Coming next "BUTCH CASSIDY AND THE SUNDANCE KID”

The theatre opened as Ricci’s Theatre (aka Ricci Theatre) on Christmas Day, December 25, 1913 by Joseph M. Ricci. On August 15, 1915 and following a refresh it became a movie house called the Life Theatre. For the next 15 years, the Life Theatre played mostly silent films.

Ricci sold the venue but he and his son, A. Leo Ricci’s, reacquired the venue wiring it for sound and renaming it the Ricci Capitol Theatre on November 11, 1930. The outdoor sign read, Joseph M. Ricci’s Capitol Theatre. Leo Ricci arranged a ten year sub-lease with Connecticut Amusement to run it as an art house beginning April 1, 1964 as the Capitol Theatre.