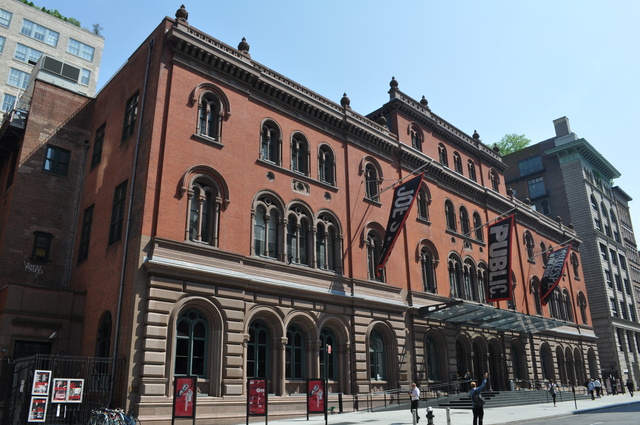 From about the late-1970’s until the 1990’s, the Little Theatre at the Public Theatre had one of Manhattan’s most imaginative movie schedules. The daily shows in the tiny auditorium included off-beat new films, forgotten older works, and special series of films.

Film programmer Fabiano Canosa brought quality films here for well over two decades. Originally the cinema was created by Anthology Film Archives, with seats that included high partition-like sides, to avoid being distracted by anything around you and enabling full concentration on the movie.

There is a new director running the Public complex and I wonder if film will make a comeback. I believe it was George Wolfe who pulled the plug on the cinema and he’s now history so…

The current location of Anthology is not listed on this site. Can someone who is familiar with it please add it?

The “Invisible Cinema” is mentioned in this week’s Boston Sunday Globe Ideas section:

So you’d like to beat the heat this summer by going to the movies, but can’t stand rubbing elbows with yakking popcorn-munchers? Avant-garde filmmaker Peter Kubelka felt the same way 35 years ago, so he designed and built the Invisible Cinema: a movie theater with peripheral blinders between the seats intended to eliminate distraction from either side. Did it work out? According to an oral history of the Invisible Cinema by cineaste Sky Sitney that appears in the current issue of Grey Room, a quarterly of art and politics published in Cambridge by the MIT Press, yes and no.

In 1969, Kubelka joined with Stan Brakhage, Jonas Mekas, P. Adams Sitney (Sky’s father), and other filmmakers and critics in founding Anthology Film Archives, a museum of experimentalist film in downtown Manhattan. They leased a cinema on Lafayette Street and covered the walls, ceiling, and Kubelka-designed seats with black velvet. In addition to the barriers between seats, latecomers weren’t permitted to enter the theater. Confirming that the seat design cut down on chatter, Brakhage tells Sitney that ‘'people really had a sense of drifting in a black space, a black box, and black ahead of you, nothing visible except the screen."

Another Brakhage memory, however, may explain why the experiment wasn’t repeated after the archives moved to a new location in 1974: ‘'There was a nervousness about it. The minute they tell me I can’t pee, for example, I suddenly have the sensation that I have to. If you get up and leave, you can’t get back in. So there you are, parted between the vision you are seeing and bodily functions. Quite a strain, I thought, in that sense."

This link takes you to the later and current 2nd Avenue location of Anthology Film Archives.

This is where the original Japanese language version (no Raymond Burr) of Godzilla was shown in 1981 as part of a “Summer in Japan” series of Toho films. I believe this was one of only a handful of venues for this film (original language, unedited version, 1954, GOJIRA) until Rialto’s distribution of it ca. 2004-2005.

Pier Paolo Pasolini’s 1967 Oedipus Rex didn’t have its New York commercial first run and American premiere until 1984 here at the Public. Fabiano Canosa often dug up unseen important films such as THIS ONE.

There was another Public theatre on second avenue and fourth street in the thirties that occasionally showed movies.

This was a splendid little theater. In 1979, I saw a pristine print of Orson Welles' Othello here, at a time when it was virtually impossible to see. It was on a double bill with Welles' latest, his last completed film, Filming Othello. Sadly, Welles' reputation was at its nadir then, and this historic booking got almost no press coverage.